Whoever thought Verdi’s Il trovatore needed an injection of humor to make it complete? 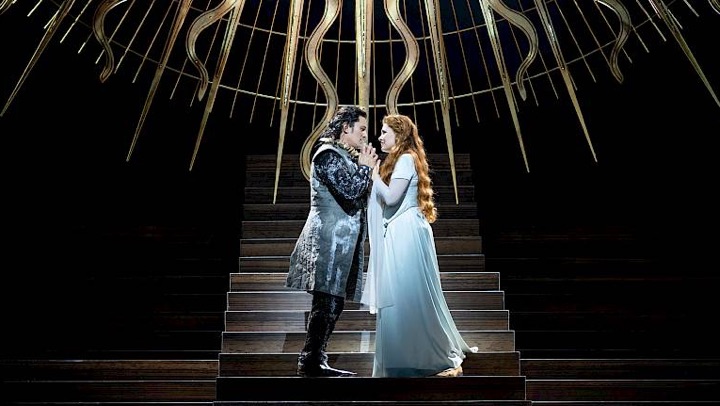 Apparently British director Adele Thomas did. In her first production for Zurich Opera, which premiered last season, Thomas peered deep into tragic tale, only to discover that comic relief was just the thing it needed.

Di Luna’s soldiers would have been right at home in a Monty Python film, while Manrico’s men were a cross between the Muppets and the friendlier denizens of The Lion King. Nothing like something soft and cuddly to prepare you for Manrico’s severed head front and center as the curtain fell at the end of the opera.

Ferrando (the impressive Robert Pomakov) also got special treatment in the form of oversized webbed feet. He was accompanied by writhing figures, who interjected constant movement, when stillness would have been far more welcome. 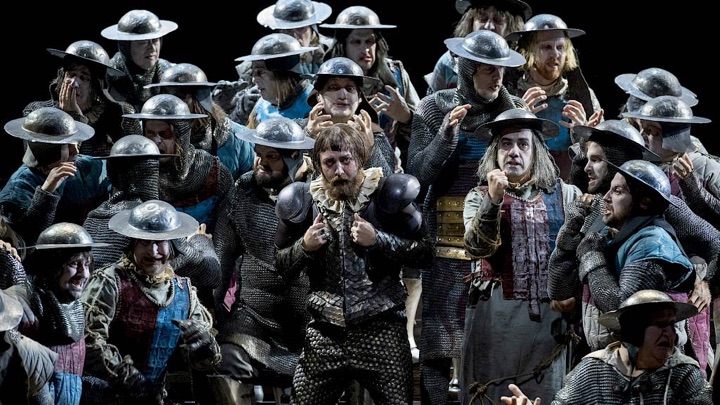 Thomas kept the action in the fifteenth century; Hieronymus Bosch supplied the inspiration for her flights into grotesque fantasy. Costumes set the period, as there was no set per se, only a staircase encased by multiple prosceniums. The words “Mi vendica,” or “Avenge me,” were written above the stage.

Nonetheless, there were scenes of beauty such as when Leonora is about to take her vows as a nun, and later when she and Manrico were framed by exquisitely crafted gold metal work as they prepare for their wedding.

A rather welcome surprise came when Thomas dispensed with the silliness and nonstop motion altogether for most of the third and fourth acts. Sure enough though, Ferrando and his accomplices slithered back on stage in plenty of time for Manrico’s execution. 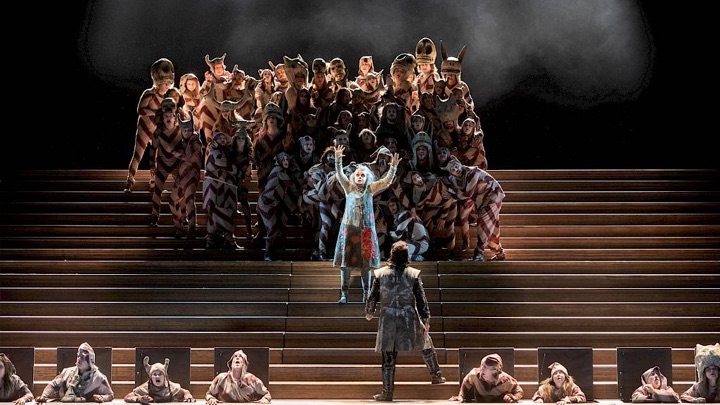 Arturo Toscanini’s quip that all is needed to cast Il trovatore are the four best voices in the world, didn’t materialize for this performance. Artur Ruci?ski’s di Luna and Yulia Matochkina’s Azucena, however, most likely would have met the maestro’s expectations.

Ruci?ski’ managed to look noble even when costumed in a pink tunic emblazoned with a red heart. His di Luna existed on another plane than that of his soldiers, appearing oblivious to their antics. More importantly, he sounded magnificent. His voice blazed in “Il balen del suo sorriso,” which was the most impressive singing of the performance.

Matochkina reached similar heights in her portrayal of the Romani woman intent on avenging her mother’s death at the hand of di Luna’s father. She was spellbinding in “Stride la vampa” and in her duet with Manrico, “Ai mostri monti ritorneremo”. In the latter, Matochkina expressed her longing to return to the mountains with a far-away dreamlike simplicity and truly beautiful sound. 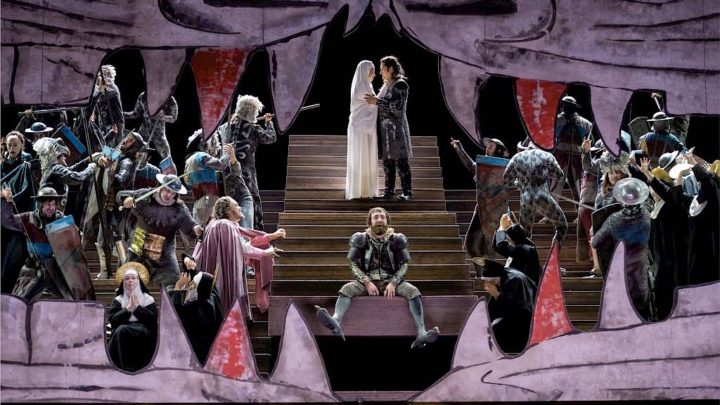 Elena Mo?uc’s essentially lyric soprano was ill-suited for Leonora. She could float lovely high notes, as she did in both “Tacea la notte placida” and “D’amor sull’ali rosee,” but otherwise she lacks the vocal resources for the role.

Tenor Stefano La Colla had an off night. For most of the first two acts, he sang with an unattractive nasal twang and then slugged his way through “Di quella pira”. The aria was marred by forced high notes and pitch problems. After that, La Colla mustered his vocal resources for the “Miserere” and his duet with Azucena, but it was far too late in the game to rescue his performance.

The men of the Zurich Opera Chorus relished the opportunity to have so much fun on stage and sang with unbounded enthusiasm. The sounds from the pit were just as exciting, with the orchestra responding to conductor Paolo Carignani’s every wish. He led a dramatic, and incisive reading of the score and was also seemingly oblivious to what was transpiring on stage.