I see in Kimberly Akimbo an audacious idea, once unthinkable territory for a musical, which is realized through a highly imaginative and often unpredictable use of song and especially open-ended ensemble writing. 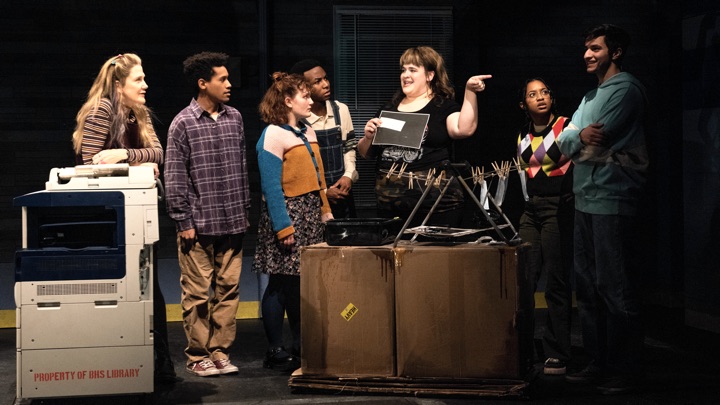 DAVID FOX: Cameron, for the last two-plus weeks, even as the season continues, cautiously, to bloom, we—along with many others in the theater community—are still remembering Stephen Sondheim. Though his death on November 26th was unexpected, I’m struck by the almost magically poignant timeline. A revival of Assassins had opened at Classic Stage Company only days before (Sondheim had attended); and very shortly after, the revised Company premiered on Broadway. We weighed in on the latter here, and I won’t add to it, except to say that these bookend events now seem to me to celebrate that Sondheim remains vibrantly in our present. I felt that even more powerfully as we sat in the Atlantic’s Linda Gross Theater, watching Kimberly Akimbo, a new chamber musical by composer Jeanine Tesori with book and lyrics by David Lindsay-Abaire. Like so many other contemporary musical writers, Tesori worked with Sondheim on various projects, and learned from him; she wrote very movingly about it in American Theatre Magazine. Her compositional style (really, I should say “styles” plural—she has mastered many) isn’t to my ear particularly similar to his—yet I see in Kimberly an audacious idea, once unthinkable territory for a musical, which is realized through a highly imaginative and often unpredictable use of song and especially open-ended ensemble writing. All of this is very much a door that Sondheim’s work opened in an everlasting gift to this art form. I should say at the start that I was not ultimately as swept away by Kimberly as I wanted to be, though there are some marvelous moments and superb performances. But I was frequently very emotional watching it, thinking about all of the above.

CAMERON KELSALL: Tesori and Lindsay-Abaire attempt to thread the same needle that Sondheim looped many times. The subject is at once melancholy and vivacious, with a healthy dose of absurd humor underscoring some very heavy issues at the center. The title Kimberly is Kimberly LeVaco, a 16-year-old girl from New Jersey who seems to have many of the problems shared by her cohort—finding friends, navigating crushes and dealing with her overbearing, often clueless parents. But since Kimberly is played by Victoria Clark, the 62-year-old star of The Light in the Piazza and Sondheim’s Follies, you can imagine something isn’t quite right. This isn’t a case of questionable casting, a la Ben Platt in the recent Dear Evan Hansen movie; the choice of actor is very much deliberate. Kimberly suffers from a genetic condition that causes her body to age rapidly, thus almost certainly shortening her life expectancy—when we meet her, she’s both preparing for graduation and entering her twilight years. The delicate balance between deft adolescent comedy and the dark undercurrent of impending premature death does feel particularly Sondheimian, but often I felt that Tesori and Lindsay-Abaire defaulted to a maudlin cheeriness when matters really could’ve used some edge.

DF: Generally speaking, some of my favorite theater experiences are out-of-the-box shows that would be difficult to categorize in terms of tone or genre. Kimberly certainly checks both boxes. Over the course of two-plus hours, I saw it by turns as a high-school musical; a doomed teenage romance; a caper comedy; and a darkly hilarious exploration of a New Jersey family struggling on the margins. Frankly, I was most won over by the latter, but I admire the sheer oddness of it. 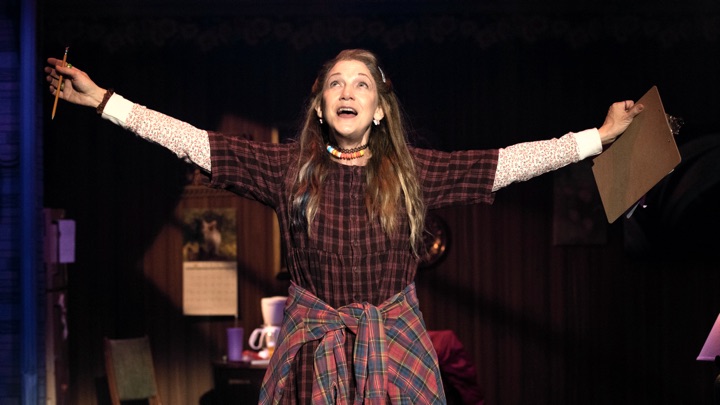 CK: Indeed. Kimberly is not just struggling to come to terms with her own mortality—a journey that Clark communicates beautifully—she also carries the load for her problematic family, which includes a pregnant hypochondriac mother (Alli Mauzey), an alcoholic father (Steven Boyer), and an aunt on the lam (Bonnie Milligan). They make a motley crew of a clan, and their hijinks could easily tip into cartoonishness—but in contrast, the musical’s most successful moments focus on how they manage to hold themselves together even in the face of spiraling chaos. I especially enjoyed the alternately prickly and tender interplay between Clark and Boyer, who shows how a parent who often says or does the wrong thing can still express deep love for his child.

DF: In a strange sense, I find Clark’s performance simultaneously the revelation of the show (and I urge anyone who loves musical theater to go for her alone, though there’s much more)—and its central problem. Her characteristic quality of radiant, heart-piercing honesty is evident in every single moment on stage—so much so that her romance with Seth, a “normal” teenage boy (played by an adorable newcomer named Justin Cooley) feels simultaneously sweet, tragic, and very real. And of course Clark’s glorious voice is its own reward—whatever may be prematurely aging about Kimberly, she’s vocally a marvel of freshness! But the depth and warmth of Clark’s performance pulls us away from the snarky comic elements that I think more closely represent the tone that Lindsay-Abaire is going for. As I say, it’s a strange problem—and I don’t think it’s Clark’s fault. As a very smart friend of mine commented, there’s a flaw inherent in the material—Kimberly is meant to be aging physically, but otherwise a regular teenager. For good theatrical reasons, Tesori and Lindsay-Abaire keep wanting to make her more complex than that.

CK: I understand the impetus not to portray Kimberly as a petulant, hair-twirling teenage girl in a grandmother’s body. Doing so raises the possibility of turning what should be very serious material into obvious parody, the kind you’d find in sketch comedy. It’s one of the few areas in which director Jessica Stone, who elsewhere has a habit of goosing the already broad comedy, exhibits impeccable taste. But it does leave us with the dilemma of a character who is both more physically and mentally mature than anyone else onstage, including the adults in her life. I’m not saying that isn’t possible—especially since context suggests Kim was raised in a tempestuous home—but the script spends little time exploring dramaturgically how she came to her wisdom.

DF: We should probably point out that the source material is a non-musical play, also called Kimberly Akimbo, by Lindsay-Abaire, who here is adapting his own material. I never saw it and I think, Cameron, that you didn’t either. But I do know that here he has added an ensemble of high school students. They are played with considerable charm, but again it pulls us in a different direction. And I’d have to say that I think Tesori and Lindsay-Abaire’s least effective songs are those written for them, which have a dispiritingly generic “youth musical” style. She does far better with the more complex writing for her older characters. 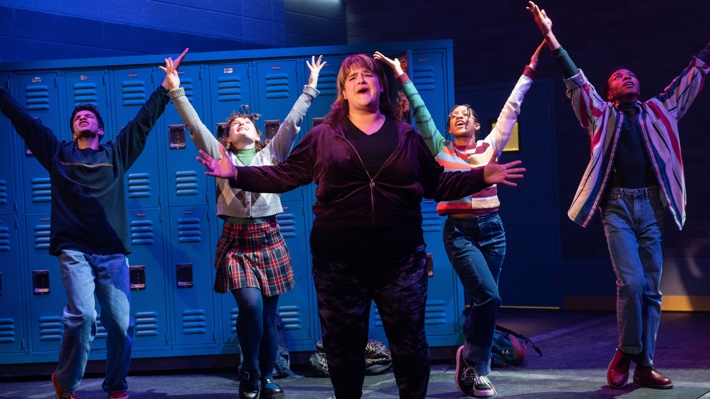 CK: Largely, the high-school students serve no purpose other than to distract, and too frequently, the material assigned to them is of the cutesy, teenage drama variety. (Example: the four kids are all unrequitedly in love with each other, with no two sharing the same object of affection.) They do provide one of the more effective moments in the musical, though—a chorus late in the second act where, lost in reverie, they delineate all the wonderful things they plan to do when they grow up and get out of New Jersey. As their words and music swirl around the stage, Clark’s Kimberly sits dead-center, her hauntingly expressionless face communicating the grim truth that she will not share this experience. It’s a brief glimpse of the tone I wish the show had taken more often, unremorseful and unapologetically uncomfortable.

DF: As I’m reading this over, Cameron, I’m thinking our review has some of the same chaotic tonal mix that Kimberly itself has! So let me take this opportunity to agree that the ensemble you mention is one of the lump-in-my-throat highlights for me. Broadly speaking, I’m awed by Tesori’s ability to write stream-of-conscious narratives for any number of characters (including solos) that really delineate who they are in complicated, intriguing ways. This also gives me a chance to praise Steven Boyer, who brings exceptional dimensionality and likeability to the role of the father, who could easily seem like a cliché. Boyer doesn’t have Clark’s blue-chip vocal timbre, but he’s a scrupulously musical singing actor who absolutely nails the difficult pitch intervals and complicated rhythms asked of him here. Bravo!

CK: I’d also add that Alli Mauzey has an arrestingly individual voice that’s put to very good service in developing her slightly loopy yet endearing character. Yet despite the many positive elements we’ve highlighted, the show just doesn’t hang together very convincingly. One problem is that Lindsay-Abaire’s libretto is rarely as funny as it thinks it is, and some of the performers work too hard trying to sell subpar jokes. (Milligan, who flaunts an impressive voice, is the chief culprit here.) The other problem is that waffling tone. Whenever we approach a moment that feels genuinely caustic and dark, the focus tends to pull back toward movie-of-the-week sentimentality. And while I would never deny Tesori’s tremendous talent—also on display this season in a revival of Caroline, or Change on Broadway—much of her music here sounds general and forgettable. There are several characterful songs that lift plot, but just as frequently, she defaults to the sort of bland recitative underscoring that seems de rigeur among “serious” musicals these days.

DF: Again, reading this over, I’m struck by two things, Cameron. One is that while we clearly agree on some of the issues here, I sense that I both enjoyed and admired Kimberly more than you did. The other is that I fear a reader looking over this review and trying to decide whether or not to see the show will emerge more equivocal than before! To me, that’s a very Sondheimian problem. So I’ll just say it outright: I think you should go. Kimberly is an imperfect show for sure, but there are enough treasurable elements that you’ll be glad you did.