Teatro Grattacielo presented two visions of love’s magic on November 13 and 14—one via Spain and Argentina (in collaboration with Opera Hispánica) and the other via Alsace by way of Italy. 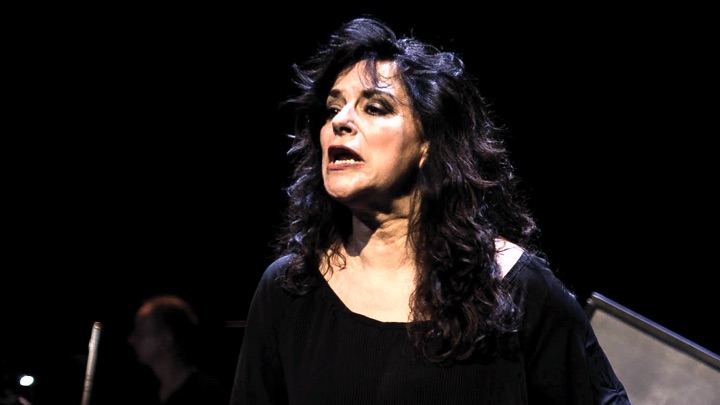 Both evenings were semi-staged with a chamber orchestra at the Ellen Stewart Theater at La MaMa in the East Village.

Some background on Oblivion: Astor Piazzolla composed the song “Oblivion”, a haunting melody said to be Piazzolla’s most beautiful composition, in 1982 as part of the soundtrack of the Italian film Enrico IV directed by Marco Bellocchio. The song and other music from the film inspired an album entitled Oblivion.

The darkly handsome Feulien seemed the blander of the two singers with a smooth dark sound that operated at the same loud dynamic level with too few shifts into soft introspective tones. In Italian opera, Feulien’s phrasing has lacked rhythmic precision and vocal pointing—he sounds better singing in his first language Spanish the music of his native land Argentina. His major memory lapse in the latter half of “Preludio para el año 3001” was a serious setback because it was the last piece in the Oblivion program intended to provide the climactic final statement.

Herrera, born in the Canary Islands, has been a Met Carmen, Maddalena and Herodias and proved herself the more finished and artistic singer. Her burnt umber mezzo-soprano flashes with coppery brilliance on high and plunges into earthy open chest tones below.

Herrera’s haunting rendition of “Los pájaros perdidos” (“The Lost Birds”) quivered with the sad longing of the narrator who loves lost birds knowing she herself is a broken bird searching for a love that eludes her. Herrera’s other solos revealed a bold defiant sensuality reminiscent of Bizet’s Carmen, her signature role. The male and female soloists alternating songs of lost love, longing and betrayal suggested ex-lovers dealing with a broken affair—a theme the two singers carried over into El Amor Brujo after intermission.

Jorge Parodi and his musicians summoned up the sultry air of Buenos Aires in a dark black box theater on a cool Fall evening in New York City. Eight members of the Metamorphosis Chamber Orchestra were joined by Rodolfo Zanetti on bandoneon, Pedro Giraudo on bass and Rodrigo Ilizaliturri on piano.

Zanetti in particular brought out a remarkable array of colors, dynamics and phrasing from the bandoneon (Piazzolla’s own instrument) which is basically a concertina or accordion but sounded like its own orchestra in his hands. The instrumental playing brought unalloyed pleasure throughout the evening.

Manuel de Falla’s El Amor Brujo (“Love the Magician”) is stylistically and geographically a long distance from Piazzolla’s Buenos Aires. Usually El Amor Brujo has been performed in the 1916 symphonic revision consisting of orchestral pieces interspersed with three songs for mezzo-soprano (or soprano).

The narrative concerned an abandoned gypsy girl Candela (Herrera) still longing for her lost lover Carmelo (Feulien). Candela goes to an abandoned cave in search of a witch who will cure her unrequited love. The cave is empty, so Candela in desperation invokes a diabolic spell that will bring her lover before her (“Danza ritual del fuego”).

In a strange, hallucinogenic scene we are transported to a street in Spain where Candela confronts Carmelo with his betrayal. Initially he does not know her but she draws him in seductively, then her recriminations fill him with remorse.

With the dawn, the vision evaporates like the smoke from the fire pit and alone in the cave Candela greets a new day freed from love’s spell. (The ballet version synopsis online is more complicated with a ghostly ménage-a-trois plot reminiscent of Dona Flor and her Two Husbands!).

Herrera’s cultivated classical tones lack the raw edge of the cantaora (check out Rocio Jurado or Esperanza Fernández on recordings if you want to get a taste of real gypsy singing) but her throbbing tones and vivid declamation made Candela’s desperation palpable. This was a visceral, exciting performance. Feulien’s cocky machismo as Carmelo gave way to bitter regret.

Malena Dayen’s direction did not engage in unnecessary fuss—movements were simple and direct and the focus was squarely on the singers. Troy Ogilvie was listed as choreographer but there was no dancing just expressive movement.

Feulien strutted around the stage like a cabaret singer while Herrera’s expressive plastique evoked the character of each song or scene. Set and Lighting designer Jon DeGaetano provided a unit set of small set pieces like broken mirrors on which were projected images of flying birds, fire, a threatening sky, a hand with an eye in the palm, etc. (Projections designed by Matthew Dienhart).

Candela’s confrontation in the street with her feckless ex-lover was reminiscent of the desperate Santuzza in Pietro Mascagni’s Cavalleria Rusticana pleading with then turning on Turiddu. Mascagni’s 1890 one-act melodrama established him as Italy’s hot new giovane scuola composer and ushered in the era of verismo in opera.

Looking to show the opera world that he wasn’t a one-trick pony, Mascagni premiered his L’amico Fritz, a three-act pastoral romantic comedy adapted from a French novella by Erckmann & Chatrian, on October 31, 1891 at the Teatro Costanzi in Rome. (The original stars were Fernando de Lucia and Emma Calvé who also introduced the opera to the Met in January 1894, the critics were harsh and it only played one complete performance that season.)

L’amico Fritz was a major change of pace for Mascagni yet was his second most successful opera and remained in the Italian stage repertory gradually disappearing after World War II. The lilting “Cherry Duet” and an aria or two are frequently programmed in opera concerts and recitals which along with audio recordings have kept the opera’s title alive in opera lovers’ minds.

The opera has been staged in Newark, Philadelphia and Sarasota but has gone unheard in New York City in nearly a hundred years. The last professionally staged performance was at the Metropolitan Opera in 1923 with Miguel Fleta and Lucrezia Bori (two Spanish singers!). A student performance at Juilliard in 1970 revealed the budding charms of Catherine Malfitano as Suzel.

That all changed when Teatro Grattacielo presented it on Sunday afternoon, November 14th in a semi-staged performance, the singers all off book with costuming, minimal scenery and video projections. Teatro Grattacielo was founded to present neglected verismo operas, they not only fulfilled their mission with L’amico Fritz but also reacquainted opera lovers with a charming work full of fresh melody and harmonic invention that they knew mostly through recordings.

The plot is set in the Jewish community of Alsace though the musical language evokes Southern Italy. Fritz Kobus is a genial, generous but stubborn middle-aged bachelor who declares himself “always a friend to every man but husband to no woman”. Rabbi David, the local “shadchan” (matchmaker) has other plans for Fritz and right on cue enters the ingenuous and lovely Suzel, young daughter of Fritz’s tenant farmer, bearing a posy of violets (“Son pochi fiori”).

Fritz is smitten and shows up at their farm in Act II and duets romantically under that cherry tree. Fritz talks himself out of it but the gypsy boy Beppe (mezzo en travesti) sings the praises of love while the good Rabbi stokes Fritz’s jealousy with a phantom fiancé for Suzel. Act III has Fritz resisting his passion (“Ed anche Beppe amò”) while Suzel has given in to despair (“Non me resta che il pianto ed il dolore”).

The lovers deny their love then break down and declare their passion. The Rabbi, Beppe and their friends hail Fritz the soon-to-be married man as the curtain falls.

The upstage scrim wall was used for projections and video by Matthew Deinhart and Sangmin Chae. Though in general I like the use of projections, these images were often literal and banal (falling petals during “Son pochi fiori”) or redundant (side view close-ups of the singers during their solos). T

he videos played constantly which distracted from the expressive singers and well-presented staging. Malena Dayen in collaboration with Stefanos Koroneos provided simple direction that kept the singers mostly in a line downstage—some singers could have benefited from personenregie.   The staging did use the whole space including the catwalks.

Luckily the cast was winning from top to bottom. As Fritz Kobus, lyric tenor John Bellemer flashed a winning smile with dimples and sang clear open Italian vowels—his bright tone gave Fritz needed dash and charm. His high notes—particularly in forte—are somewhat pharyngeal in vocal production and lack squillo but the tonal quality and stage presence are pleasing and he is an alert actor.

The real find was soprano Alexandra Razskasoff as Suzel. Her full dark soprano is capable of lyric charm floating pianissimos. Yet she also has nascent spinto potential filling out climactic phrases and passionate declamation with rich, soaring tone.

Razskasoff phrases with style and musicality making one long to hear what she can do in middle Verdi and Puccini—the vocal goods are there. She is currently a little tentative and awkward as an actress which is why stage experience in small companies like this one is so beneficial.

Baritone Marcus DeLoach as Rabbi David (who during the Fascist era in Italy became “Mayor David”) projected a genial if stolid stage figure but this is a personality role and he lacked personality. DeLoach’s tone lacks Italianate open vowels and warmth however it’s secure from top to bottom.

Conductor James Bagwell led a contingent of players from the Queens Symphony Orchestra in a reduced orchestration for about 18 players. There was also a mini-chorus of about half a dozen singers including comprimarios who doubled as choristers—luckily the choral work in this opera is minimal and often offstage.

In the past, Teatro Grattacielo has been notable for recruiting a large full orchestra of professional well-rehearsed freelance musicians under stylish conductors like the late Fiora Contino, Guido Ajmone-Marsan and Israel Gursky.

Bagwell though a fine musician, didn’t quite have that sense of style and his chamber orchestra sounded unruly in the first act. The woodwinds and horns settled down somewhat in Acts II and III but more rehearsal would have produced better ensemble and balance between the sections.

Despite this critic’s reservations about the projections and orchestral playing, Teatro Grattacielo’s presentation of L’amico Fritz revealed almost all of its charm and stage worthy qualities. The audience response at the final bows was rapturous.

The melodic interest is there in every bar—not just the famous duet or two or three solos. The intimacy of Teatro Grattacielo’s chamber opera presentation emphasized the human and subtle qualities of Mascagni’s gentle romantic comedy bringing us closer to these people and letting them touch our hearts.

It also dispels the notion that Mascagni only composed one good opera and the rest are disposable—Teatro Grattacielo revived Mascagni’s impressionistic Iris in 1998 and revealed a major neglected masterpiece which later was done at Bard’s Summerscape Festival with great success a few summers ago.

Teatro Grattacielo and Opera Hispanica treated these pieces with love casting a magic spell on their audiences!