In an era when the Metropolitan Opera cannot cast an Aida, Trovatore or Forza consistently, New Amsterdam Opera managed to cast large, attractive and fully technically capable voices in all the cruelly demanding principal roles in I Vespri Siciliani! 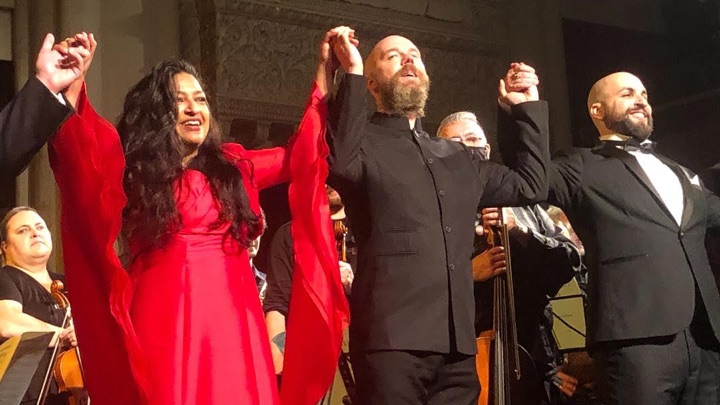 A lot of old New Yorkers bitch and moan about how the city is dying and old New York is disappearing. The last big recession, real estate prices and now the COVID-19 pandemic have put paid to many of our favorite entertainment and dining establishments while real estate developers raze beautiful old buildings including historic theaters.

One of the saddest casualties has been the demise of established small opera companies and concert opera presenters. These companies gave local opera lovers needed variety letting us experience seldom heard operas live and gave opportunities to young operatic talent on the rise. The biggest loss was the old New York City Opera which seems to be struggling to survive in its newest incarnation. I still grieve for the loss of the Amato Opera, Dicapo Opera Theatre, LoftOpera and Opera at Caramoor.

For me one of the cruelest losses was the closure and dissolution of Opera Orchestra of New York. Founded 50 years ago by Eve Queler, OONY presented operas in concert the Metropolitan Opera hadn’t staged in decades or never performed. Czech Operas, rare bel canto, French opéra-comique and grand operas, rare Russian masterpieces, early Verdi operas and neglected verismo works got local hearings often introducing new singers like a young Renée Fleming in La Straniera or Aprile Millo in I Lombardi and Il Pirata.

But just as Opera Orchestra of New York stepped into the void created by the disappearance of Allen Sven Oxenburg’s American Opera Society and Robert Lawrence’s Friends of French Opera, Maestro Keith Chambers inaugurated New Amsterdam Opera in 2016 just as OONY closed its doors forever. Queler has been a champion of the fledgling company and donated to them Opera Orchestra of New York’s music library of orchestral scores and parts.

The company was to have presented a concert version of Verdi’s I Vespri Siciliani in May 2020 but the pandemic put paid to those plans. Blessedly, nearly a year and a half later, New Amsterdam Opera finally presented Vespri on Friday, October 22nd 2021 at the Center at West Park Presbyterian Church on 86th Street. 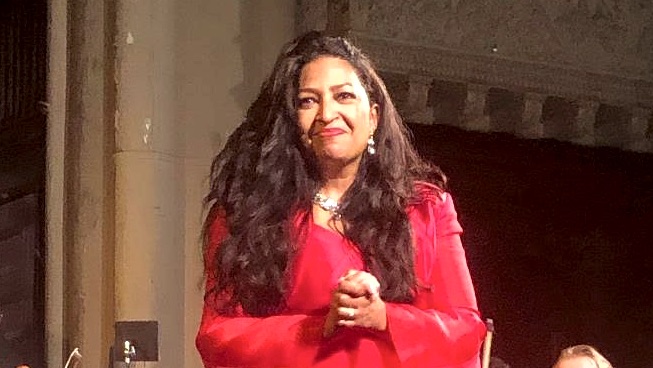 I Vespri Siciliani is the Italian translation of Les Vêpres Siciliennes, a French grand opera set to a libretto by Eugène Scribe which premiered at the Paris Opéra in 1855. It was a middling success and did not enter the French repertory. Verdi and poet Ettore Caimi immediately set about translating the work into Italian which the composer found a dispiriting experience: “I now know what it means to translate and I feel sympathy for all the bad translations that are around because it is impossible to make a good one,” he confided to Tito Ricordi.

Verdi’s French grand opera was retitled Giovanna di Guzman for censorship reasons resetting the action to Portugal under Spanish rule. Not only was the text purged of political, libertarian, and religious references but the octosyllabic meter of French verse was altered to conform to Italian metric forms. Add to this the very different accents and syllabic stresses of French versus Italian and the composer’s careful prosody and musical phrase structure are ruined.

In 1861 for Italian productions, the original setting in Sicily under French rule was restored with the original character names and the worst translation errors were corrected. However, the majority of the standard Vespri libretto is still Caimi’s faulty Giovanna di Guzman translation.

Les Vêpres Siciliennes, like Don Carlos has usually been performed internationally in Italian translation—the Metropolitan Opera performed both works exclusively that way until later this season when Yannick Nézet-Séguin will at last present Don Carlos in French. The Met last revived I Vespri Siciliani in 2004 with Sondra Radvanovsky, Leo Nucci and Samuel Ramey and it has not been heard in New York City since.

At the 2013 Caramoor Festival as part of Will Crutchfield‘s “Verdi in Paris” program, Les Vêpres Siciliennes was finally heard in the original French language in an uncut concert performance with Angela Meade and John Osborn. It was a revelation to say the least. In 1989, Queler and OONY presented a concert Vespri with Susan Dunn, Renato Bruson and Paul Plishka in a cut Italian version and those musical parts were the ones used by New Amsterdam Opera for their concert presentation.

Whatever the preference for language, what we all crave after years of deprivation is big, stirring and heroic Verdi voices singing the grand melodies of a big, stirring Verdi opera—and that, despite huge obstacles, is what we got in spades this past Friday night. The orchestral playing was also well-rehearsed and well executed by 35 musicians (Maestro Chambers trimmed the string section and a few horns with no loss of detail or sonority). A chorus of 19 singers in the choir loft also did full justice to Verdi’s demands despite their smaller numbers. 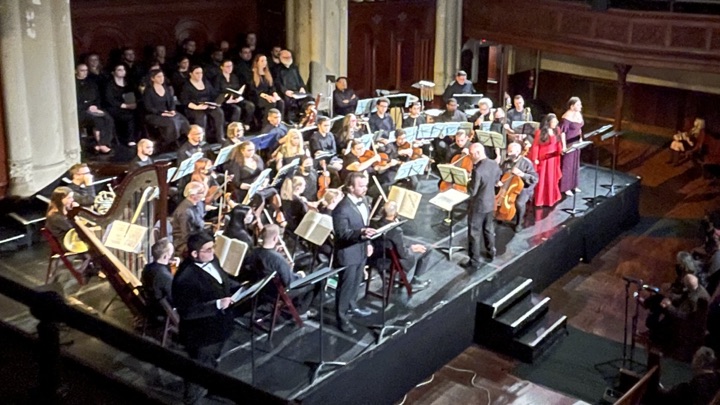 The slight reduction of choral and orchestral forces was not only practical but artistically valid—the Center at West Park is not a large space but is very resonant with wooden floors, walls and metal ceilings. A full complement of singers and instrumentalists would have been deafening in that acoustic. There were some cuts of choral repeats and the entire Act 3 ballet “The Four Seasons” was omitted as was customary in Italy (it can be seen and heard in s Jerome Robbins‘ delightful choreography at New York City Ballet).

What was really surprising is that in an era when the Metropolitan Opera cannot cast an Aida, Trovatore or Forza consistently, New Amsterdam Opera managed to cast large, attractive (if not always Italianate) and fully technically capable voices in all the cruelly demanding principal roles in I Vespri Siciliani!

Soprano Indira Mahajan sang the demanding role of Duchess Elena with a dusky, smoky spinto soprano that was resonant and lush sounding over a nearly three octave range. The role of Hélène/Elena requires broad lower range singing in the Falcon tradition with exposed high coloratura passages pulled out of nowhere.

The heavy dramatic singing of the third and fourth acts is capped in the fifth act by a florid “Bolero” (really “Siciliana”) showpiece made famous by coloraturas from Tetrazzini to Callas and Sutherland. Mahajan only faltered briefly in the tricky high scale work in “Arrigo! Ah, parli a un core” which she immediately corrected when the phrase repeated. Mahajan’s floated piano singing there reminded one of Leyla Gencer. If her trills and staccati were less than precise in “Mercé, dilette amiche” she stunned the audience with a huge high E at the end—this after over three hours of heavy singing in the middle and low registers!

The role of Henri/Arrigo is also a killer—Domingo said of it “They all warn you about Otello – no one warms you about Arrigo!” The vocal writing is designed for a typical French grand opera “fort tenor” like Arnold in William Tell or Raoul in Les Huguenots, requiring extreme control in the upper middle register and beyond, delicate lyricism contrasted with heroic declamation. Bel canto is required as well as “can belto.”

Tenor Jeremy Brauner was undeterred by the range and contrasting vocal demands. Like Jean de Reszke, Carlo Bergonzi and Lauritz Melchior, Brauner started his career as a baritone and restudied as a tenor (under the tutelage of Carol Yahr) making a second debut as Alfredo in La Traviata in 2016.

Brauner has a firmly resonant middle register with a round fruity color which can take pressure without resorting to forcing the tone. The upper register is covered with a slightly backward placement yet is in no way throaty or constricted. He did not tire despite the heavy demands of Act Four and capped his Act Five serenade “La brezza aleggia intorno” with a full-voiced high D!

In the role of the conflicted French governor Monforte, Daniel Scofield provided some of the best singing of the evening with his introspective mezza voce phrasing in Monforte’s Act 3 solo “In braccio alle dovizie”. His smooth-grained but large-sized Verdi baritone was capable of lyrical and dramatic vocal effects underpinned by firm legato control.

The bass role of the Sicilian rebel leader Giovanni di Procida demands less nuance and more blunt force.   Bass-baritone Bryan Glenn Davis made him a force to be reckoned with a craggy but imposing tone. Davis doesn’t have an Italianate sound (being somewhat grainy and brighter in color) but it is a mature, well-seasoned voice. Smaller roles were ably taken by Suchan Kim, Jordan Weatherston Pitts, Julia Snowden, Wilbert Kellerman, Juan Hernandez, Diego Valdez and Andrew Richardson.

Chambers, New Amsterdam Opera’s founder and artistic director, led a shapely reading of Verdi’s score full of rhythmic attack and brooding drama. His love of the music showed in the well-prepared performance which was cast with voices capable of fully realizing Verdi’s wide-ranging demands. Les Vêpres Siciliennes has been considered a gateway work bridging Verdi’s middle Italian period of La Traviata and Il Trovatore to his mature masterpieces like Forza del Destino, Aïda and Otello.

It is a work that we need to hear in live performance to get a sense of how Verdi developed as a composer. I look forward to what New Amsterdam Opera will bring us in the future—we all need something to look forward to in these trying times.