New Camerata Opera is presenting its first staged and indoor program in some time, at “The Muse,” a lofty cabaret space up against a cemetery in Bushwick, and their singers sound like they’ve been champing at the bit for eighteen months and are bursting to vocalize! 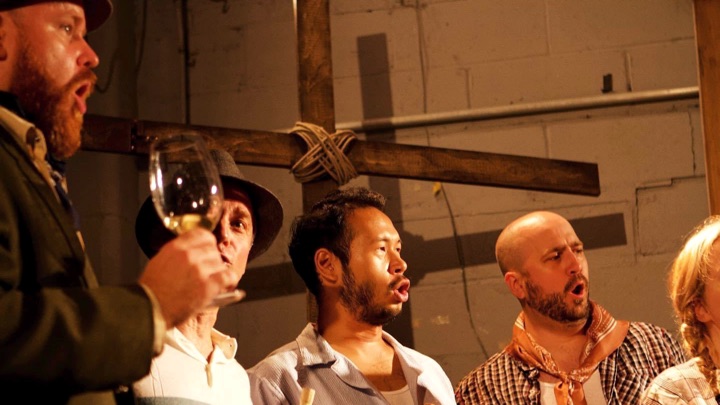 They all sounded good on Thursday night (to be repeated October 2), and some of them sounded far better than that, and there’s a second cast prepared to go on this Saturday and next Thursday. The show is titled Cav+Pag, and it’s a 90-minute mashup of Cavalleria Rusticana and I Pagliacci, which are more usually given as a distinct pair.

I was especially thrilled by the leading ladies. Megan Nielson, a fiery spinto with impressive evenness from top to bottom of a soprano of great size and beauty, and a snarling emotional focus on what she sang, which was almost the entire role of Santuzza. (No Easter prayer.) What a joy to hear so uncompromising a soprano at such close quarters!

Samina Aslam took the contrasting role of Nedda, who has time for coloratura reverie as well as an impassioned duet, and then must change gears to the nonsense artifice of the play-within-a-play; Aslam has a clear, attractive, well-supported soprano and sure acting chops to toss off her assignments without letting the commedia interfere with her passionate sound.

The men were only a little less thrilling: Steven Wallace sang Turiddu’s serenade with an ardent, liquid line that roughened naturalistically for the furious duet with Ms. Nielson. (Too bad they snipped half his brindisi.) Erik Bagger sang Canio with the proper rattle and threat (in this staging, he’s been drinking—a lot—between the discovery of his wife’s adultery and the play), but his voice is a dry one, fine for anger, not so winning at the self-pity of “Ridi, Pagliaccio.” (Anthony Roth Costanzo sang it better last night.) Bagger hits the notes, but his anguish does not reach our hearts.

From this description, you will wonder if this wasn’t just the usual double bill. But it was not. The ostensible backstory (“developed by John de los Santos, Samuel McCoy and internationally-renowned dramaturg Cori Ellison“) is that a Sicilian town has been devastated by an earthquake—the villagers use the prelude (from Mascagni) to clean it up, with a rough cross in the corner to which any of the characters may appeal if the audience is unsympathetic.

It looks very Carravaggesque, that battered cross, and goes with barefoot and impoverished singers if not the company’s overly intense lighting. Meanwhile, the stories of two operas have got impossibly jumbled by the quake, and the clowns have been summoned to cheer up the homeless victims. 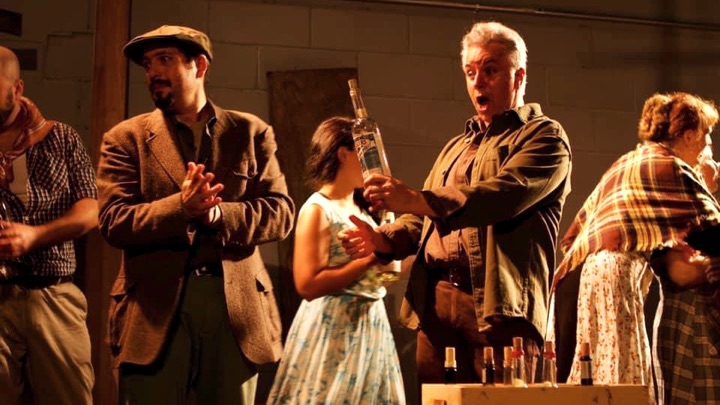 The reason for doing it this way is clear: Cav and Pag are just too inhumanly long. I know you’ve always felt that. No one can sit still while those hours and hours of adultery and vendetta go by. Perhaps a Major Domo showed up, in the name of the richest man in Verismo (unnamed, probably a Mafia baron), and commanded that the company save time by performing two operas simultaneously. It’s up to us to guess which one is the serious tragedy and which the knockabout farce. The trouble with that is these two taut little dramas have scarcely an extra line or bar that is a candidate for omission.

I suspect the decision behind the program has more to do with the reduced size of the orchestra (10, often very proficient, led by Sam McCoy, who also made the reduction of the score—I could have used softer bassoons, but they stood in for the absence of clarinets) and the chorus (even fewer). The show must go on; make do with what you have.

Too, I suspect only a gimmick would draw New York’s opera goers to the farther reaches of the Canarsie line. An ordinary Cav/Pag wouldn’t do it. So we’ve now got one opera (90 minutes’ duration), no intermezzi (Cav’s is abbreviated before curtain-rise), no touch of grand opera Easter procession, and an unhappy ending. Or two. Or three. And guess who sings “La comedia è finita”?

There may be some difficulty comprehending the goings-on if you are not familiar with these two most popular masterpieces of the entire Verismo era. But what opera lover does not know them? Adulterous love, local color, vendetta, a dead tenor—or a soprano and a baritone—in a pool of blood. We know exactly where we are: at the opera. And since the leitmotiven of these two fatal pieces are familiar to everyone who goes to the opera, we all know, the moment one scene ends and another, from another opera, begins, what number is up. And whose.

At The Muse, the orchestra is seated behind the audience, which means the singers on the small stage appear to be looking at us when they are following the conductor. They also occasionally dash into the aisles to confront each other—across the room. Verismo opera as if performed in your own living room! With surtitles, but you don’t really need them because they’re singing in your face.

Among the singers of smaller roles, I especially enjoyed Stan Lacy’s Tonio, who produced a fine crooning Prologue; Rashard Deleston, a stalwart Beppe, perhaps a bit forthright for this serenading character; Angky Budiardjono, as Nedda’s ardent Silvio; and Costas Tsourakis, obliged to omit Alfio’s song but made up for it by growling his duet with Santuzza in a way that recalled Tito Gobbi.

The Muse is quite a sizable space, vast ceilings and a long room, larger than many of the smaller Italian opera houses. Operatic voices bloom triumphantly there and it’s barely a five-minute walk from the subway.