As soon as James Clutton, the new Opera Holland Park director, stepped on stage to welcome the audience, we all knew that we were not at the typical English summer opera festival. 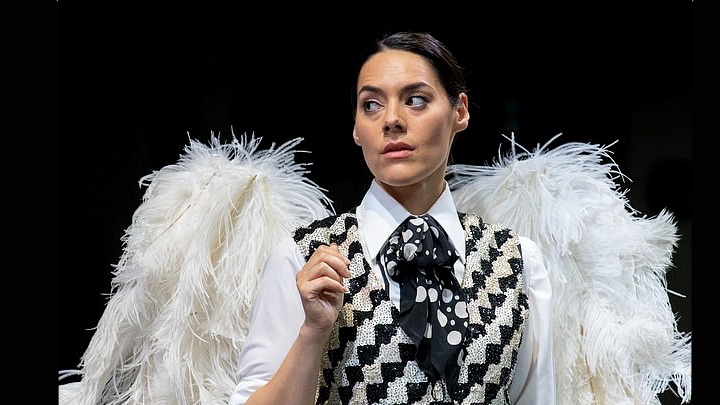 True, Holland Park’s season happens during summer and in a beautiful park but that is the end of similarities with others festivals like Garsington, Grange Park, the Grange Festival or Glyndebourne.

A director wearing shorts on the stage would have been unimaginable on those other places that usually require a black tie dress code. Also, his words were quite striking: He explained that even if the current government guidance allowed to have the auditorium at full capacity they chose to stick to the commitment they had with the audience when they sold the tickets in a socially distanced layout. That was the first ovation of the night of many to come.

In this difficult pandemic season, Opera Holland Park, a small company, has accomplished the titanic task of staging four full operas. That is the same number of operas that the powerful Royal Opera House staged in the whole season and double the ones staged by the English National Opera. It is in Opera Holland Park’s DNA to combine repertoire works with less known verismo operas. They have presented in the recent years Cilea’s L’Arlesiana, Mascagni’s Isabeau (in a co-production with the New York City Opera), Leoncavallo’s Zazà, Mascagni’s Iris and Montemezzi’s L’amore di tre re.

This is the third production of L’amico Fritz staged by Opera Holland Park, a record justified by the love shown by the audience and the convenience of programming a lighthearted work in times when the escapism for easy and beautiful things is much needed.

The story is simple: a nice rich guy, Fritz, enjoys life and refuses to get married until he falls in love with Suzel, a younger lower class girl. But there is no problem, zero drama and zero plot twists. (As I said, how convenient to program this opera this season!). Many could consider the sedate simple plot a turn off for such an elevated art as opera, but Mascagni’s genius creates music that matches the emotions in a wonderful way that invites the audience to empathize.

The production by Julia Burbach takes the action to the 50s and minimizes the obstacles for the lovers: Suzel is not presented as underage and the class separation doesn’t seem so evident from the costumes. It’s more like a hedonist embracement of the joy of love. Even Beppe, Fritz’s Romano friend, is portrayed as a Cupid with wings. The rest is sheer rom com.

Matteo Lippi was a fine Fritz with an expressive singing that managed to show the evolution of his feelings, crafting an interesting climax. Katie Bird shone as Suzel in her short solo arias. Both were communicative and credible in the famous cherry duet.

David, the Rabbi, was sung by Paul Carey Jones who clearly had a good time singing and acting it. As Kezia Bienek was indisposed, she acted the role of Beppe on the stage while Victoria Simmonds sang it from the pit. This disconnection didn’t mar the drama as their character was already a magical creature with Cupid wings. Beppe even mimed to the magnificent orchestral violin solo as Fritz and Suzel fell in love).

All the factors (programming, production, cast) were aligned towards a straightforward but not easy goal: enjoyment though uncomplicated beauty.