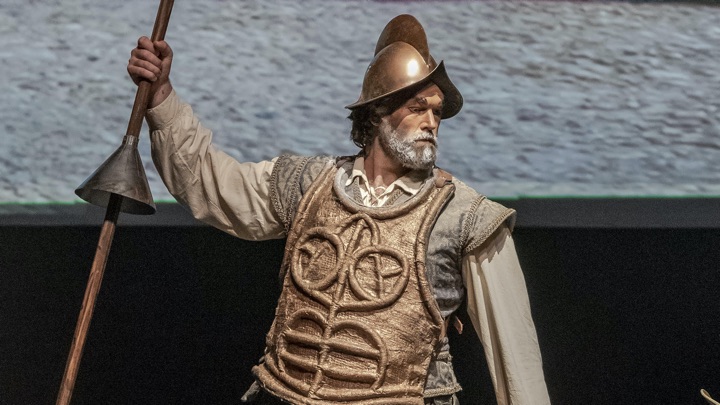 Yet there was an undeniably poignancy in Opera Saratoga’s choice to open its 60th anniversary season with this show. For the past sixteen months, the act of gathering for live performance has often seemed an impossible dream, a quest that artists, administrators and audience members have fought while those on the sidelines scoffed. As conductor Laura Bergquist said in a moving featurette that screened prior to the performance, the rehearsal process—which involved masked rehearsals and stringent social distancing—often felt like “a quest of going after windmills.”

Just as milquetoast Alonso Quijana becomes the knight errant Don Quixote, Opera Saratoga achieved its quest, presenting the first performance on July 8 to a respectably sized and vocally receptive audience. (Although New York State has lifted its restrictions on gathering sizes, the production still employs pod-style staggered seating.) As the first notes of music wafted into the breezy, raining night, there was little doubt that triumph was in store, at least from a musical standpoint.

The company fielded a fine cast, as adept in characterization as they are vocally. Zachary James builds on his early career experience as a musical theater performer to deliver a thoughtfully crafted, blessedly restrained Quixote/Cervantes. He arrives on the stage a dashing poet, his imposing frame projecting authority, but quickly transforms before our eyes into the aged, delusional courtier who tilts at windmills and mistakes whorehouses for castles. James handles the shifts between narration and scene work seamlessly, confirming his bona fides as one of opera’s more exciting and intuitive actors. 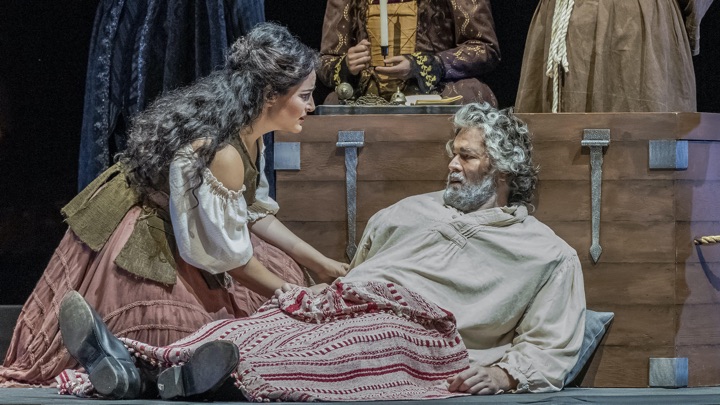 The bass-baritone is surprisingly well suited to the score, which often sounds most comfortable in the Broadway bari-tenor hybrid range. The lyrical high notes in “Dulcinea” emerges with ease. Most impressive, though, is how he handles “The Impossible Dream” not as a hard-charging anthem but as a tender, inward-looking prayer. The effect feels almost improvisatory, as if Quixote is discovering, for the first time, why he has embarked on a journey that seems like madness to most people in his life.

James pairs well with Kelly Glyptis, an arresting, spirited Aldonza. She doesn’t quite possess the freakishly exciting vocal breaks of Joan Diener, but she navigates skillfully the score’s difficult leaps from chesty low notes to high-lying phrases. Impressive, too, is Brian Yeakley, whose Sancho Panza resists the Borscht Belt schtick that has been appliquéd to the role. His bright, ringing tenor should peg him a natural in character roles like Herod and Loge.

The young ensemble is uniformly strong, with Jeremiah Tyson a particular standout as the comic barber whose shaving basin is taken by Quixote as his golden helmet. Bergquist conducts sensitivity, with good support for the singers, although the amplification at the Saratoga Performing Arts Center was somewhat tinny.

Director Lawrence Edelson’s minimalist approach to staging—mainly, to keep the actors front and center with only necessary props, while emphasizing the play-within-a-play structure of the story—works well, although a series of projected backdrops representing windmills, churches and the Inquisition’s pyre look like cheesy screensavers. They could be jettisoned with hardly anything lost.

But that’s little bother. The impossible dream has been realized: live, in-person music theater is back. The quest continues.