For the weeks between the announcement that the return of Wolf Trap Opera would, in part, take the form of a concert performance of Sweeney Todd and its opening at the Filene Center on Friday evening, I racked my brain: why Sweeney now? 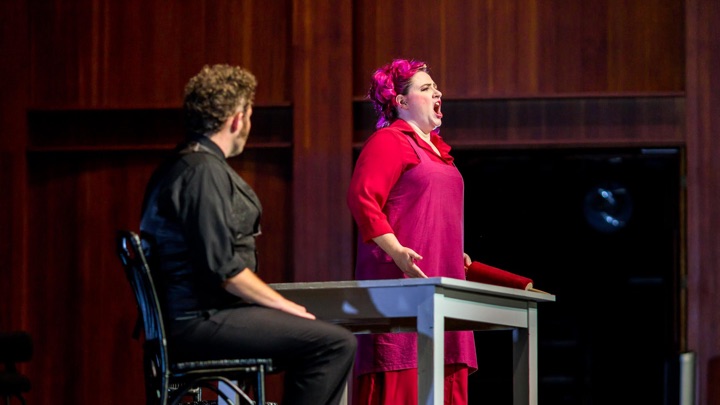 But it only took the sound of an orchestra, the swirl of the gloomy toccata prelude, and, most arrestingly and intrinsically to this work above all others in the musical theatre canon, the sight of a full chorus, to answer my lingering question.

If presenting a work so dependent on its chorus is, both practically and symbolically, an act of defiance and rebirth in the post-covid era, especially in Northern Virginia where cases are low and vaccinations are widespread, then this Sweeney signaled that live opera (or musical theatre or whatever Sweeney is) is back with a vengeance in the DMV (even if the area’s largest opera company will not be back in full swing until a rescheduled Così next March).

It’s this chorus that affords the work its greatest complexity and the thing that maybe tips it out of opera territory and back into that of musical theatre as both evidence and consequence of Stephen Sondheim’s wide swing with Sweeney’s scope.

Though the composer himself has cautioned against approaching Sweeney Todd as a wide-ranging parable for our modern day – for, say, the consequences of general disenfranchisement, or for the corrupting influences of the industrial age, as Hal Prince saw it – the vox populi morphs and fragments into the ravenous crowd, the tortured conscience, the prescient and omniscient narrator, a cacophonous moral voice.

If, as I have before heard, Sweeney Todd is “about everything”—as we say the Ring cycle or Fidelio, Don Giovanni or Hamlet are—it’s not only because Sondheim relied doggedly on not only the theatrical innovation best preserved from antiquity, but also because we have a propensity to view ourselves in, around, and upon the crowd we perceive.

So, when critics like Foster Hirsch in Harold Prince and the American Musical Theatre lament that “[Sweeney’s] story is too bizarre to stand the Everyman signification that the creators seem to want to assign it,” it’s missing the point. As is often the case with Sondheim, the message is subordinate to the means, the process paramount to the themes.

The (both individual and collective) body’s capacity for change is what engenders significance and creates tension. Sweeney, by conjuring an ever-morphing moral and musical society for its formulaically-drawn characters to inhabit, achieves a deceptive thematic and structural scope through its choral contributions, instead of with them.

That’s its marvel, and, I believe, what lifts it from the realm of opera and onto a plane where it sits, grimly and not without its own inconsistencies, unmatched. And for a piece that trafficks in such morbidity, it was only when the chorus, incisively coached by Joseph Li and composed primarily of members of Wolf Trap Opera Studio, appeared onstage that my goosebumps came out.

In Sweeney, action is part of the musical apparatus but is not consistently reflected in the musical process or underscoring. Therefore, whereas a concert performance of, say, Oklahoma! might underwhelm in how effectively it relays the nature show itself, a concert performance of Sweeney can, more or less, get the (or, at the very least, a job done.

Emma Griffin seemed to grasp this idea effectively and her directorial touch was light (sometimes too light – no meat pies or bottles of Pirelli’s Miracle Elixir, yet someone remembered to bring a flog for Judge Turpin?). But conductor Roberto Kalb’s still lighter touch was an even greater asset as he drew a refreshingly translucent reading of the score from the National Symphony Orchestra.

“Verve” was the operative word for the soloists, too. Thomas Glass, enabled by a baritone of polished teak and a take on the title character that ran the gamut from easily-produced gallantry to vocally-secure wrath, was especially impressive. If only he had been matched by Megan Esther Grey, whose singerly yet overly daffy take on Sweeney’s co-conspirator Mrs. Lovett was not worth the gasping and ignored music hall style, even if she did occasionally offer glimpses of a rich and plummy mezzo.

Amongst the supporting cast, Alexandra Nowakowski was a characterful and handsome trilleuse as Johanna, Sweeney’s long-lost daughter and an object of his anguish. His baritone emerging from a low center of gravity, Jonathan Bryan was a strapping Anthony, the sailor that Johanna falls in love with, even if the heroic upper reaches of “Johanna” had him sounding ever so slightly parched. Nicholas Netwon, whose brilliant smile complicated his believability as the villainous Judge Turpin, radiated nobility rather than authority, and Conor McDonald as Toby showed off a voice with an arresting depth and spin.

It was, indeed, a testament to the performances that “depth and spin” was the main impression the evening left. While opera companies are often uniquely positioned to offer bombastic classic musicals the staging resources that Broadway and regional theatres are too budget-strapped to give them, musicals often end as overblown, failed tests of restraint for overzealous presenters. Wolf Trap Opera may have tread lightly with the physical imprint of one of their first post-pandemic productions, but such strong and serious music making, with the ensemble at its core, bodes well for reopening and beyond.