Jonathan Dove’s Flight, which premiered at Glyndebourne in 1998 and is now being streamed by the Seattle Opera, is structured like one of those baroque extravaganzas where some half dozen characters find themselves (in every sense) on a magical island, its properties little understood. 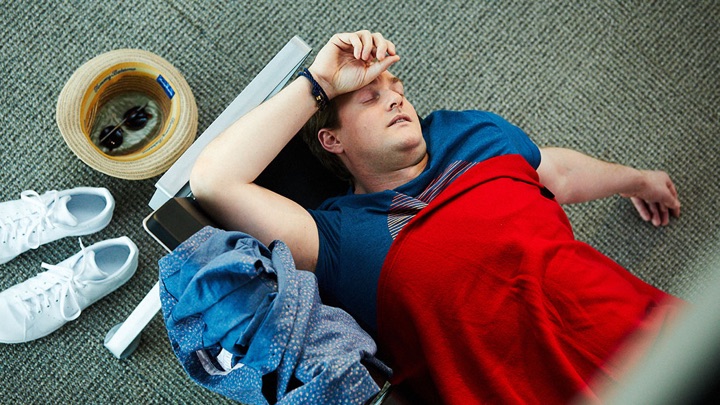 Their romantic confusions create the action while the music explores their inner torments, or something like that.

The enchanted island in Flight is an airport (actually the Museum of Flight beside Boeing Field in Seattle), and the characters are miscellaneous travelers and some airline staff, trapped (by a storm of course—even Shakespeare got that right) in this region between the worlds, forced to cope and interact and fantasize. Do they want to get home—or is home the place they are trying to escape? Airports are a place between worlds, not destinations themselves. Not residences. Unless…

One of the characters is a wild card indeed—a Refugee who has reached the airport (hiding in a wheel) from his oppressive homeland but, without papers or money, does not know what to do next. He possesses magical stones, his only advantage—perhaps they will help other travelers who will, in turn, help him. Or will the phony stones arouse their rage? Will they go mad, like opera’s Orlando?

The story derives from the case of an Iranian refugee who hid out in Charles de Gaulle Airport for 18 years. This sounds unlikely, except that nowadays, with refugee camps all around the Mediterranean, it’s typical, and on the opera stage is echoed by Menotti’s The Consul, Argento’s Postcards from Morocco and Henze’s Raft of the Medusa.

Dove has capitalized on the Refugee’s position outside the accepted roles of this story, by making him a countertenor, vocally someplace between male and female. In Seattle, the role is taken by burly, bearded Randall Scotting, familiar to New Yorkers for his Handel, Bostonians for his Gluck, whose creamy, muscular alto soars suavely high when he remembers the agonizing cold of his journey.

In 1998, the countertenor had not been part of the usual complement of singers for twentieth century opera, though Britten created Oberon and Philip Glass Akhnaton, using the countertenor range to express a lofty otherworldliness. Today, countertenors are more and more part of new operatic work, and Flight’s Refugee, the only character who is not gainfully employed, well-fed, rightly grounded on the premises, highlights the oddity, the eccentricity of this magical locale.

The stories otherwise are insubstantial and unrealistic. A businessman in a hurry whose very pregnant wife suddenly refuses to fly. A randy flight steward and a prim but not reluctant stewardess who fool around between chores. A married pair hoping to rekindle on an exotic vacation. A middle-aged woman hoping to meet a younger man she has been corresponding with—today, of course, she would not be allowed to wait in the lounge.

All the characters are self-involved, disinclined to help the scruffy refugee, tossing casual remarks from their solitudes. The lonely woman—Margaret Gawrysiak—for instance, pretends only to understand French in order to avoid questions. But she doesn’t actually know any French.

All their hopes are upended when a storm, grounding all flights until morning, is decreed by the Flight Controller—Sharleen Joynt, who has a lofty sound indeed, chilly for formalities but full of private, celestial ecstasies, a luscious voice, with far more body than the average high soprano.

The satirical plot doesn’t take itself too seriously. Had it premiered after 9/11, the misadventures of stranded plane passengers might have seemed in poor taste (although they got a Broadway musical out of that, didn’t they?), but happily Dove and his librettist, April De Angelis, dodged that bullet. Their fable recalls a more innocent time—but not one lacking in shadows. The characters reach out for emotional connections, and are often disappointed.

The score is a lively, attractive, expertly devised, tonal without being old-fashioned, relevant without forfeiting wit, human without too much sentimentality. (Of course the pregnant abandoned traveler will give birth in the departure lounge. You knew that the moment she came in.) The melodies are not, on first acquaintance, individual or irresistible but they move and agitate with the story. The orchestration is self-consciously brilliant, full of intriguing percussive effects, in a style that reminds me of Britten, and the vocal lines delight (as too few modern operas delight) in the voice and its sensuous and dramatic possibilities.

This includes—I am happy to say—several concertati. Many modern composers seem to forget that the great dramatic advantage of opera is that different words and different emotions can be expressed simultaneously in an opera with no loss of sense. Brian Staufenbiel (stage director) and Kyle Seago (video director) have likewise taken their cues: a septet of worried pre-flight characters presents itself in seven singing gadgets on a plane’s dashboard.

On stage, no doubt, they would stand and sing in a row—boring! The Flight Controller imagines herself soaring into the heavens or rolling on the grass. There is a merry quartet for two gentlemen and their ladies, the morning after the stormy night, when the ladies wonder how the gentlemen happen to have exchanged trousers in the dark. (Ah! That’s the Figaro esprit!)

The remaining singers, all unfamiliar to me, all young, personable, and possessing clear, easily produced voices that blend tidily in the concertati, are Karen Vuong (Tina), Sarah Larsen (Stewardess), Karin Mushegain (the pregnant Minskwoman), Joshua Kohl (Bill), Joseph Lattanzi (Steward), Aubrey Allicock (Minskman) and Damien Geter as the saturnine Immigration Officer, who has a heart of gold and declines a bribe. A more innocent age, that.

The Seattle Opera Orchestra—or part of it anyway—has been elegantly conducted by Viswa Subbaraman.

Flight has been streaming for Seattle Opera subscribers since April 3 and will continue through midnight on the 25th. It will be available as pay per view from 7:00 PM on April 23 at seattleopera.org.