Proudly and vividly on display was Anna Netrebko’s unique and glamorous ability to wear the music like a parade of couture gowns—some more sparkly than others, some a more flattering fit, but all thoughtfully chosen and laced into with care. 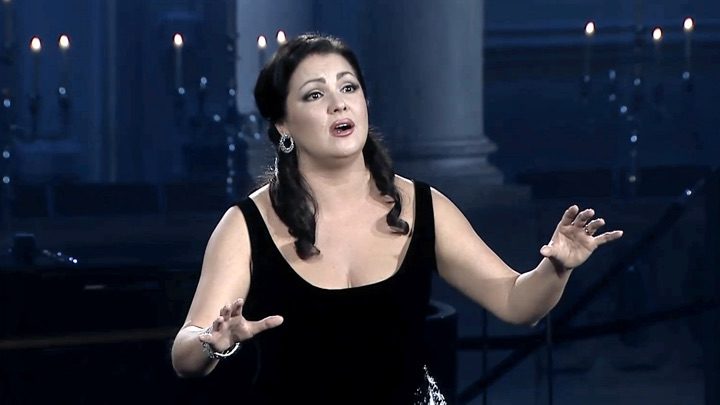 At the contentious point of confluence between the decay of the Met management’s relationship to its orchestra and chorus, conversations about cultural appropriation in opera, and what it means to safely present a concert during the coronavirus pandemic, the idea of a blithe recital by Anna Netrebko, whose outsized social media presence piquantly challenges at least two of the above themes, seems about as off-key as the diva herself sounded in moments of Saturday’s program.

However, what it did manage to convey was the extraordinary sense of spontaneity that staid recitals (from many a presenter) have lacked to communicate over the past several months. No, she was not in flawless voice, and no, the intellectually inclined yet fairly homogeneous program didn’t reach vaunting philosophical heights.

But proudly and vividly on display was Netrebko’s unique and glamorous ability to wear the music like a parade of couture gowns—some more sparkly than others, some a more flattering fit, but all thoughtfully chosen and laced into with care. 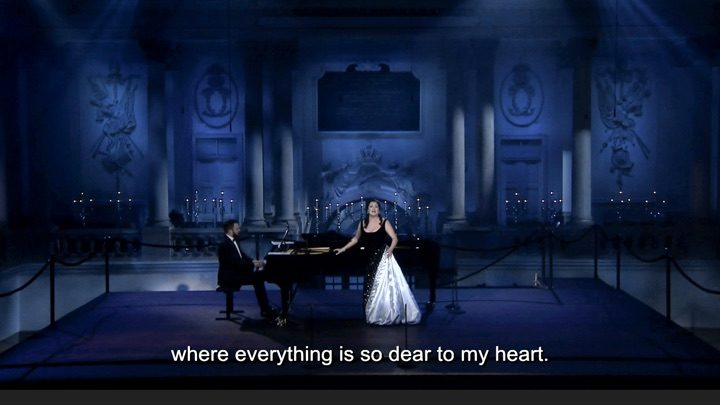 Nearly half of the program, vaguely divided into “night” and “day” and echoed in a dress of black velour and blue silk, included songs first heard by Met audiences at Netrebko’s 2016 all-Russian big-house recital. In selections by Rimsky-Korsakov and Rachmaninov, she alternated between the expansive and the ostentatiously contemplative.

Performing on a spacious platform in the center of the Spanish Riding School’s ring, Netrebko bloomed into a sympathetic acoustic for the inaugural “Lilacs” by Rachmaninov. She wasted no time in teasing out her well-documented sense of control and paradoxical excess, a refulgence of tone but delicacy of attack. An expansive “Before my window” followed, but the following selection, “How fair this spot,” gradually but fully unveiled what remains an underappreciated colorful voice with signature translucent pianissimi.

Befitting the “day” portion of the program, “Morgen” showed Netrebko as idiomatic as I have ever seen her in German, but so waylaid by errant intonation that Strauss’s familiar song, despite gaining stability towards the end, mostly fizzled. The two French selections that followed, Debussy’s “Il pleure dans ma coeur” and “Depuis le jour” were the afternoon’s highlights. Though French diction is hardly Netrebko’s sweetspot, her deep placement and dark sound gave the disquiet setting of Verlaine’s poem tremendous drama. 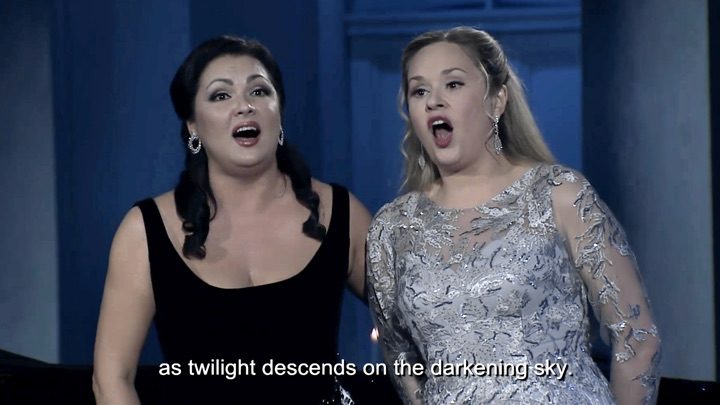 And the Louise excerpt was every bit as ideal a showcase for her instrument as one would hope, though the waft up to the high B was ever so slightly impeded by what sounded like some phlegminess, both here and in other moments. The only Italian song, “Mattinata,” rounded out the “Day” with an exuberance and tonal similarity that strived to both see and raise Lise Davidsen’s “I Could Have Danced All Night” from the summer.

Excerpts from Tchaikovsky made a fine impression; his meandering melodies and emotionally charged pastoral scenes are especially congenial to Netrebko, from the ecstatic and thrice-repeated “Lyubov!” in “Tell me, in the shade of the branches” to a “Nights of delirium” that left me craving a Netrebko Voix humaine. In Liza’s dreamy introductory duet from The Queen of Spades, a role Netrebko will be adding to her repertoire, mezzo Elena Maximova’s contributions were interestingly textured, if a little bleaty. A later appearance (in Carnival masks, not KN-95’s) for the Hoffmann Barcarolle caught Maximova in similarly cottony voice.

If Netrebko lacks the sort of textual rigor in German that might make her a superlative Straussian, the sovereignty with which she dispatches a melodic line certainly gets her more than halfway there; “Ständchen” and “Die Nacht,” while plagued by the same problems in “Morgen,” proved this handily and coaxed her into a rumbling chest voice which, fortunately, shows no signs of damage from Netrebko’s hospitalization with the virus in September.

Pavel Nebolsin’s accompaniment was at its most luxuriant in these excerpts, though he made a flourishing and tension-filled impression throughout, proving eminently well-suited to the diva he accompanied.

The afternoon waned, signaled by a lovely “Songs My Mother Taught Me,” a desperate Tchaikovsky “Amidst the day,” and the dramatic change in lighting that accompanied the “Night” portion of the program. A rumored “Liebestod,” rehearsed on Instagram, sadly, never materialized, nor did any cantering Lipizzaners. But the redux was an enjoyable if imperfect performance from a singer who, though not a natural recitalist, has set a standard for performances that hybridize musical diligence with gutsy spontaneity. Equally admirable is how the Met has remained unique in faithfully capturing her elusive sound on live recording.

The dynamic duo of Christine Goerke and Peter Gelb returned again to provide effusive small talk and a handsomely edited smash cut of clips from several HD broadcasts served well to chart a career trajectory that has encompassed both vocal and temperamental development over the past 15 years.

Netrebko has been long-hailed by Gelb as the Met’s “reigning diva.” For now, that premise sounds untenable without a Met to rule over. But for better or for worse, Netrebko is an artist that meets the moment, whatever it may be, and spins it back with a sensitivity and style that is both effortlessly of-the-moment and painstakingly premeditated. That immediacy is what I most miss about live performance and will be most excited to return to. She may be a queen without a throne; nevertheless, Anna Netrebko continues to reign.