You aren’t any good to me dead

The Murder of Halit Yozgat by Ben Frost and Petter Ekmann is flavorsome in its use of sound, vocal and otherwise, to explore the elements of the story, to keep you tied in, and guessing. 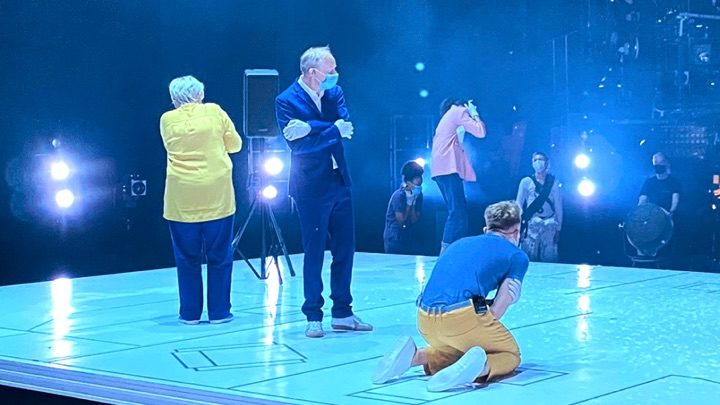 “Where is the young man? I want to pay.”

“I will bury your body in sand. First your legs, then your arms …”

“I’m calling about the Passat. ’96 model? How many kilometers?”

“Don’t you want to be left in peace?”

An Internet café in Kassel, a winter evening in 2006. There are phone booths and computer terminals. Strangers come to make private phone calls, or long distance ones, or to play a war game, “Call of Duty,” American I presume, in which the object is to kill Nazis against background battle film soundtracks. The opera is a mystery: a 21-year-old named Halit, whose family owns the café, has been murdered; is murdered, again and again, before our eyes and ears. Mostly our ears.

Deciding which character’s motives and attitude warrants our suspicion is not simple. The text, by Daniela Danz, consists of lines that might be overheard, in three languages (English, German, Turkish), in such a café. We hear half conversations, exclamations, daydreams, war game instructions: “The German army is advancing from the southeast.”

There have been several murders in the community. Crimes of passion or ethnophobia? Or something more chancy, more desperate? Those who recall Nico Muhly’s Two Boys, which played the Met in 2013, may feel on familiar ground, but the libretto and the drama here are more taut, more stylized, the score by Ben Frost and Petter Ekmann more flavorsome in its use of sound, vocal and otherwise, to explore the elements of the story, to keep you tied in, and guessing.

There are seven singers, all in casual, nondescript clothing. The repetitious lines and half-chats are sung now in this voice, now in that. (The “direction” is credited to composer Frost, the “dramaturgy” to Yvonne Gebauer and Friederike Schubert, the “choreography” to Sasha Milavic Davies. It’s not clear how this divides the honors.)

Personalities jump from singer to singer, as in the theatrical “readings” of the Elevator Repair Company, paying no attention to gender or skin color. Each section of the two-hour piece toys with nearly identical phrases, tossed about, developed, in different orders, with different emotional inflections. This is, perhaps, a modern variant of the old Italian “concertato,” the sextet or more just before the first curtain, where everyone sang at once, the harmonies weaving in and out—but in Halit Yozgat, we never know which character is which. Each of them is all.

The set, by Lisa Dässler and Mirella Weingarten, is a turntable, covered with panels of white or glass wall. Stagehands, directed with skill and discipline, open, close and rearrange the panels and the furnishings, so that labyrinths and corridors appear and remold themselves, with nooks for singers, to confide in their phones.

The camera circles the set and wanders through the staging, focusing on this chat then that. At first all is confusion. A narrator provides basic facts. Then the re-enactments become more clear, more realistic, and the background more overwhelming.

Cubicles are conversations or computers; boys play keyboard war games. This wariness/unawareness of each other in an angling set viewed through a circling camera emphasizes the conflicting chats. We stare past the telephone conversations into a dark opera house with horseshoes of dimmed lights. The producers, prevented from a stage premiere due to the lockdown last March, have taken advantage of the unique view of the camera to draw us into the drama.

The orchestra (strings and percussion) is somewhere else, hidden in the shadows, conducted by Florian Gross. Ear microphones and monitors coordinate the singers. The words glide, repetitively, from singer to singer, the timbre changing, the same phrases, now mezzo, now basso, personified for moments before they settle on some other singer. The string themes creak and shrill and clash, sometimes recalling warning sirens or battle noises or Turkish dances. The percussion could be gunshots or traffic or marching troops on echoing staircases.

The third section of the opera is accompanied by battlefield movie dialogue, warnings and war cries and turbulence. The last is hedged with wind sounds, ever more penetrating, as we seem to move from the café to icy Russia and the great German defeat. The singers, muffled and chilled, flee into the night, one by one. Except for one corpse.