Songs of mirth and triumph sing

Pretty is its own reward. 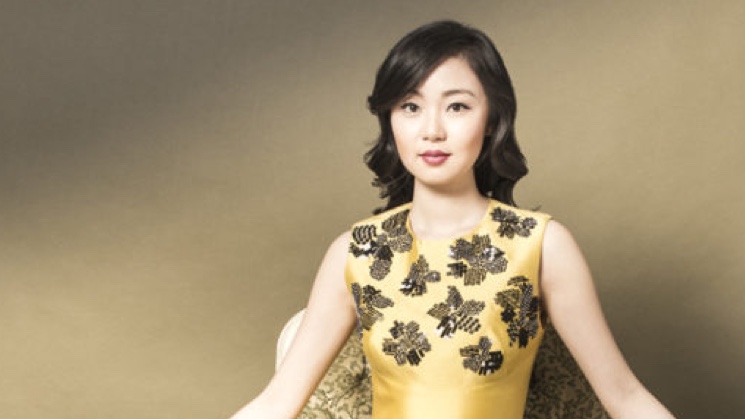 When the first notes of Semele’s “Endless pleasure” chimed out at the American Philosophical Society—Philadelphia Chamber Music Society’s second home when they’re not performing at the Kimmel Center’s Perelman Theater—I could hear the audience sighing contentedly at the sheer beauty of soprano Ying Fang’s voice.

Midway between a soubrette and a light lyric, Fang has the silvery bell-like clarity of the former, coupled with a much rarer and more precious limpid, pearlescent tonal roundedness. Fang also looked exquisite, in a black sheath dress with a translucent, dramatically geometric white jacket.

Yet pretty only goes so far, and nothing tests the full range of a singer’s gifts quite like a solo recital. I shared  that initial rush of joy at the sheer beauty of Fang’s soprano—but once the music-making was in full swing, it didn’t take long before questions crept in.

The last 30 years or so have brought bracing rethinking of how Handel arias should be delivered… so why did the Semele and Theodora arias here—certainly gracefully turned out by Fang and attentive pianist  b—sound like parlor ballads of a bygone era?

Where was the sensual Mediterranean warmth that can make Susanna’s perennial concert favorite, “Deh vieni, non tardar,” worth hearing over and over again? Why did all the languages—English, Italian, German, French and Russian—sound well-schooled rather than fluent?

Speaking of languages, in the piece where mastery of the text and storytelling mattered most—Schubert’s extended ballad “Viola,” a heavy lift for all but the most vivid Lieder interpreters—one really noted the limitations of prettiness.

Fang’s best work came in Rachmaninov’s Six Romances, Op. 38, and Bizet’s “Chanson d’Avril.” The former benefitted from her restraint and the warm glow of her middle range, and the latter had exactly the right airy loveliness for Spring. Fang was characterful too in Bizet’s “La coccinelle,” but the coyness of that song quickly cloys—I wish she and Noda had instead programmed Bizet’s greatest song, the spellbinding “Adieux de l’hôtesse Arabe.”

Listeners of a generation or two ago would likely identify this entire program as “A Kathleen Battle-style recital,” and indeed several of these pieces were in that soprano’s repertoire. In different ways, the comparison flatters both singers. Fang has the more evenly produced voice in the middle and lower ranges (where Battle often puffed up the sound) and she is also admirably free of archness. And she’s certainly better behaved!

But Battle at her best had a way of sculpting the musical line, as well as an individual star personality emblazoned on the sound, that Fang doesn’t approach—at least, not yet.

Two somewhat odd encores ended the short evening. “Over the Rainbow” was first, sweetly dedicated to the memory of Peter Serkin (a long-time Philadelphia Chamber Music Society stalwart), and even more sweetly sung—but without the sense of directness and longing that really makes it live.

The final number was the Shepherd’s song from Tannhäuser, which sounds weird outside the opera’s context, and more so when accompanied by piano. But it clearly has personal meaning for Fang, who, five years ago at the Met, scored a significant success in the small but telling role (as indeed Battle had, nearly four decades before).

I remember friends who raved about Fang in those performances. Pretty is its own reward, as I said.