We live in a time of open-season for jokes on ancient myths, mixing and matching, sometimes with great success, as The Book of Mormon and Hadestown demonstrate. 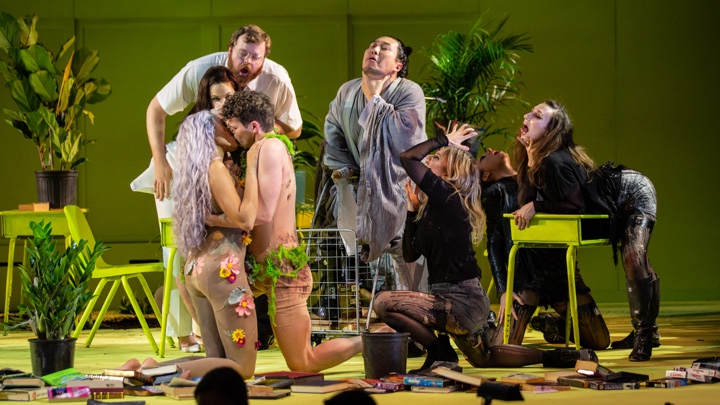 Hell, Down There, is a classroom painted lime neon green, possibly the ugliest color on offer. The three goth-hued ladies upset that the room isn’t black are the Furies, and in Cerise Lim Jacobs’s scenario, are attached to His Satanic Majesty, Lucifer.

But they—all four—lurk in this pit in defiance of its legitimate landlord, Hades, and he in turn awaits the appearance of his wife, the peripatetic, poorly seasoned Persephone. Is this Hadestown or a very ill-lit production of Offenbach’s Orphée aux Enfers? Or perhaps Neon-Green Pastures?

It is not. It is Rev. 23, a new satirical opera composed by Julian Wachner and presented at the Gerald Lynch Theater by Prototype and by Trinity Church Wall Street, where Wachner is the director of music. Don’t check your New Testament—the Book of Revelations ends with chapter 22. This opera takes place after that End. W.S. Gilbert would call it the Modified Rapture.

The libretto includes Adam and Eve, the Archangel Michael and Sun Tzu, the Chinese war philosopher—and if you can make a tight ship out of this array, you’re a better scenarist than Cerise Lim Jacobs, who has combined Milton with Bulfinch to no great purpose. If this seems a pastiche of the legendary (suitable to today, when nobody—well, nobody in Manhattan—believes in any religion, right?), the score is similarly a pastiche of better men with better tales to tell: Janacek, Britten, Dvorak, Wagner and Sondheim all turn up in the Hellish first act—hey, per Milton, this is Pandemonium, right?

In the second act, just when you are longing for peace and the scene supposedly takes place upstairs in Eden, the orchestra obligingly plays a bluesed-up version of Gluck’s Elysian Fields from Orfeo. Alas, we never do get any Offenbach, but there’s more than a touch of Andrew Lloyd Webber in Eve’s concluding aria.

Per the libretto, apparently, Adam and Eve and, most of all, Persephone are bored silly by eternal summer and hope for a little romantic nighttime to vary the pace. Sun Tzu and Lucifer provide truckloads of cheap paperbacks and movie tapes to encourage the latent libido, and Michael interferes to command them to burn all of it.

I didn’t notice what that was supposed to accomplish, or if it did so. I did like one line: “I want to touch you with my lips.” That’s prelapsarian Adam, but he doesn’t do lapsing very well. Wagner’s kissers are more romantic.

What I wondered, amidst the clatter, has Wachner the composer brought to the party that couldn’t have been provided without him? I mean, a dozen other guys are already contributing music here. True, he has great technical ability as an orchestrator, with rhythms that arouse and excite and bellow and blare, but lead us to what climax?

Does it mean anything? And as every one of the instruments is electronically enhanced, it is the sound of an orchestra at pandemoniacal fortissimo; even the pluckings and tweetings are harsh, and the marimbas surge like stormy waves at Waimea Bay.

But since the singers are also microphoned (and they sound it, enormous but bodiless, unspecific, inhuman—true, only three of them are human), the competition of vocal and orchestral noise and the dry acoustic of the Gerald Lynch makes one wince, unsure what is supposed to sound like what. It is music as frontal assault.

There was one rather appealing aria, Persephone’s reminiscence of pomegranates past, “Blood rubies, centuries old,” which turns (far too briefly) into a duet with Hades. But Wachner is too busy sorting clutter to let us dwell on a lyrical moment. Colleen Daly sings beautifully, with flowing tone; I’d love to hear her unenhanced sometime to see if she’s really that good.

Another striking vocal performance was that of sopranist Michael Maniaci as the gender-neutral Archangel Michael. Wachner has taken advantage of Maniaci’s skills (which one knows from Handel performances past) to write a role full of thrilling filigree, which he tosses off at top speed. It’s pastiche vocal writing, but it’s really good vocal writing just the same.

Sun Tzu was impersonated by Paul An, who entered—in quite the most striking moment of the night—with a sword hilt sticking from his mouth, preventing him from singing. Hades (Kyle van Schoonhoven) drew the full-length blade from the poor scholar’s throat, a tidy bit of genuine, not electronically enhanced, stage magic, and then Mr. An was able to give a thrilling indication of basso profundo excess. This was very enjoyable, but the mic’s prevent my knowing whether he really sings that well.

Alexander Birch Elliott sang Lucifer intensely and Brian Giebler was the nervous Adam. Sophia Byrd sang Eve’s concluding plea that Shakespeare’s Romeo and Juliet be spared the general holocaust in the Webber-like Broadway-decadent style that seemed called for by the music. (Michael burns it anyway.)

James Darrah directed the production, and perhaps he and the creators knew what it all meant—they did not share their focus with the rest of us. Daniela Candellari conducted the Novus NY orchestra, all very adept; she is excellent at propelling a driving rhythm, and perhaps this is not a score that permits much subtlety.

We live in a time of open-season for jokes on ancient myths, mixing and matching, sometimes with great success, as The Book of Mormon and Hadestown demonstrate—and isn’t there a play coming up based on Paradise Lost? But once upon a time (sic) such mayhem produced lighter and wittier and far more memorable fare. I have no desire ever to see Rev. 23 again, but if someone revives Orphée aux Enfers, I’ll be there with pinions on.