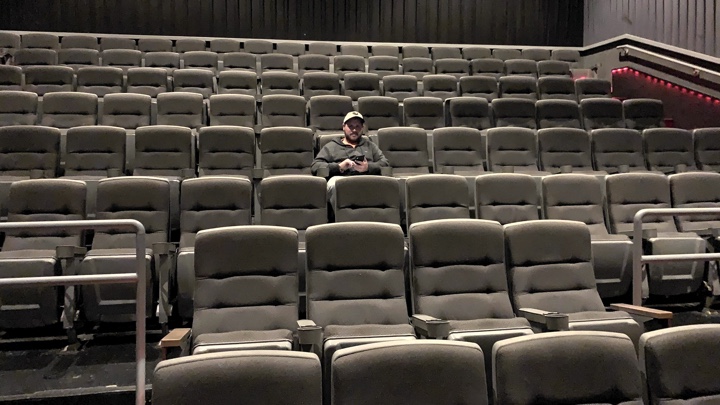 CK: …Since then, it’s become a byword for spectacular, unrelenting failure of the artistic and financial variety. Surely there’s some level of exaggeration at play, I thought, as we took our seats for a Friday matinee screening in suburban New Jersey, at one of the few theaters still carrying the film.

DF: Now Cameron, you can’t just say “we took our seats,” and let it go at that! We took our seats… in an otherwise completely empty theater, which remained so for the next two hours. Just you and me. I’ve been in small houses before, but this was a first­­­­—a private screening!

CK: At least it gave us leave to talk, howl and full-body convulse to our heart’s content—something neither you nor I would ever dream of doing with even just one other person present. And actually, the final result is worse than we were led to believe. And as hard as I tried, I couldn’t let myself stop worrying and learn to love the bomb.

DF: Wow. Just wow. First of all, can I just ask… what, exactly, is Cats about? I’ve seen it on stage at least twice and listened to the recording dozens of times, and I’ve never… never… been able to find the answer. For the most part, the movie is even less clear, but in the final hour or so, I had a weird eye-opening moment: it’s basically Britain’s Got Talent. Old Deuteronomy (Dame Judi Dench) is Simon Cowell, and the contestant who shrieks the loudest and has the most miserable backstory (Grizabella, of course) wins.

CK: Hal Prince famously reported that after trying out his theories about the musical on Andrew Lloyd Webber—is Old Deuteronomy supposed to be Disraeli?—the composer beatifically replied that it’s just about cats. That might work on stage, where a variety-show atmosphere can prevail, but on screen, the steady hand of subtext (intentional or not) cannot be avoided.

DF: I was no great fan of Trevor Nunn’s original staging, which I saw once (that was quite enough) at the Winter Garden… a matinee performance with a lot of crying children. But in retrospect—and through the lens of the movie—I have renewed appreciation for Nunn’s work, which had a bold theatricality that (and this matters a lot) made the very idea of people playing cats—as well as the whole, stylized environment of the junkyard setting—feel, somehow, workable. More than that, both Nunn’s direction and the distancing fact that this was very clearly theater allowed us to accept that these human cats were somehow a thing. In other words, the audience bought the key metaphor. 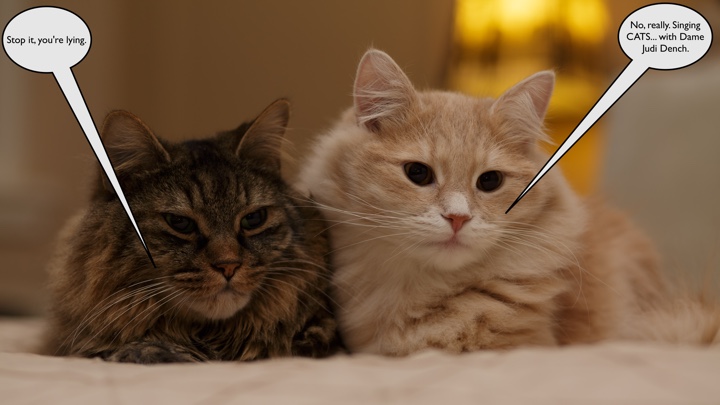 CK: The probing lens of the camera never allows the same magic to work, nor does the garish production design on display here. In Nunn’s original production—which was my first Broadway show, like so many children of the ‘80s—the scale of the set and the distance of the proscenium allowed the actors to seem appropriately miniscule. Place Betty Buckley next to a fifty-foot smoking crater and she’ll really look two feet tall. On screen, the actors look larger than life and smaller than crickets within the same scene. And little is done to obscure their gorgeous human faces, which adds an unfortunate uncanny valley effect.

DF: We can never get past the basic grotesqueness. What are these creatures? Their faces—particularly the females—are maquillaged with Kevyn Aucoin-esque glamour: smoky eyes, pouty lips, perfectly resurfaced skin, and (apart from Dame Judi and Sir Ian McKellen, who boldly reveal their own crooked smiles), capped teeth. These are clearly humans, and of course some of them are also recognizable as film stars.

CK: Jennifer Hudson sure took Grizabella’s “glamour cat” moniker and ran with it—I was in awe of her perfectly polished acrylic manicure and her floor-length fur coat, which looked lovingly tattered.

DF: True. More piquantly: once you start thinking of these cats as people, it opens a hornet’s nest of problems. On one hand, they’re highly sexualized, but on another, absolutely not: no nipples, no breasts, no genitalia (the latter made explicit in an awful moment where Rebel Wilson licks her inner thigh). And then there’s the racial politics—the principal actors of color here are cast as a prostitute (Hudson’s Grizabella), a pimp (Idris Elba’s Macavity), and two break dancers.

CK: Musically speaking, Hudson’s halting, tear-stained delivery of “Memory” answers the question you never thought to ask: What would a Sandy Dennis Grizabella sound like?

DF: Hudson makes to my mind the key mistake of treating the material like it’s serious dramatic writing—in her case, even as social realism!

CK: I think it is possible to treat “Memory” seriously and still sing it with all the histrionics it demands. Last night, after I got home, I watched a performance on YouTube of the late Laurie Beechman, a veteran of several stints in the original New York company.

DF: And my Grizabella! I’ve never forgotten that.

CK: Being primarily a cabaret singer, Beechman knows how to shade a word or a riff with a layer of meaning, or make you think about a phrase in a new way. (It also means she back-phrased whenever she damn well pleased, but somehow I didn’t mind.) When Beechman sang “Touch me, it’s so easy to leave me,” I felt the pain of abandonment, rejection and being forgotten in her voice. With Hudson, I was reminded of how little she’s really evolved as an artist since her American Idol days.
DF: Another problem with Cats more generally is that we’re now seeing and hearing performances that have accrued decades of clichés. In “Memory” specifically—here’s where I barely whisper; here’s where I build; here’s where I scream; etc. But back to the other stars. McKellen likewise overacts, and together he and Hudson answer a question I doubt has been asked before: Yes, it is possible but overload Cats with too much subtext. Other performers here seem mostly to just give up—they smile and let the CGI do the acting for them.

CK: The ballet dancer turned musical theater leading-man Robbie Fairchild comes across well as Munkustrap, the de facto narrator. He has a winning presence, even under layers of CGI. And his singing has vastly improved since he made his Broadway debut in An American in Paris five years ago, though the magic of engineering may be responsible for that.

DF: Fairchild sang fairly well in the Proms’ Oklahoma! a few years back, so I think he may actually be working on this. (Not to underestimate the power of studio knob-twisting.)

CK: Francesca Hayward, a lissome principal dancer with the Royal Ballet, snags an “introducing” credit as Victoria. In the stage musical, this character dances a memorable ballet solo, and is the first cat to show kindness to the outcast Grizabella. Here, the role has been beefed up to ingenue status and assigned the soundtrack’s only new song: “Beautiful Ghosts,” written by Taylor Swift. Hayward isn’t particularly memorable in a positive or negative since; her singing is wan, but no more so than the other non-singers in the cast, or those heard in recent movie musicals. I’m sure her luxe billing seemed like a good idea at the time, but if I were her, I’d be questioning whether there exists an actor equivalent of Alan Smithee. Since the CGI effects render her unrecognizable, she could claim plausible deniability and try Hollywood again in a few years.

DF: As usual, Dame Judi—playing Old Deuteronomy—finds a way in. When the producer hands you lemons, the best super-objective is: “I’m a National Fucking Treasure, and don’t you forget it.” Somehow, it works. And then there’s Swift herself as Bumbalina or whatever the hell she’s called. It took a few minutes for it to register that it was, in fact, she… and then it gradually dawned on me that this must have been what it was like to watch Susan Hayward as Mame: barely hanging on a moon, looking drunk, and singing like an amateur.

CK: I don’t think it’s possible for a review of Cats to be too gay, but invoking Susan Hayward in Mame might just put us over the edge.

DF: Speaking of which, now I’m waiting for Tom Hooper’s CGI Valley of the Dolls, where the cast, mostly drawn from various Real Housewives’ franchises, are largely costumed as sewer rats, and through the magic of claymation, we finally actually get “Judy Garland”’s Helen Lawson. Will you join me for that, Cameron?

CK: Broadway may not go for booze and dope, but with CGI, anything is possible!