The Stuff and Nonsense Dreams Are Made On

The New York Gilbert And Sullivan Players is giving its umpteenth production of The Mikado through next Sunday at the Kaye Playhouse, and the show remains frisky and first rate. 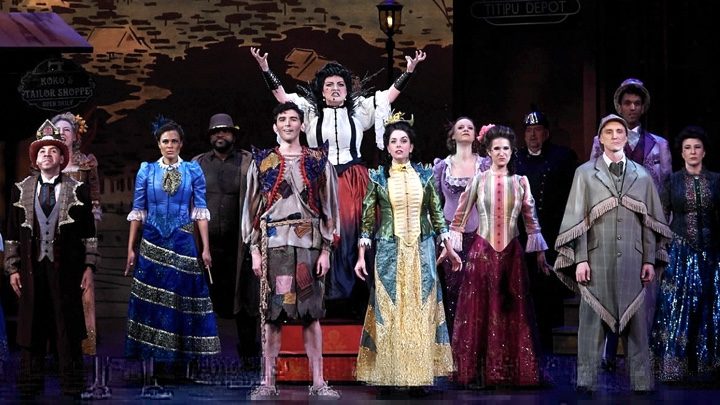 The New York Gilbert And Sullivan Players maintains that The Mikado is the most popular musical-theater entertainment in the history of the world—a plausible claim, but let’s compare the stats with Rossini’s Barbiere sometime. In any case, NYGASP is giving its umpteenth production of The Mikado through next Sunday at the Kaye Playhouse, and the show remains frisky and first rate. And has musical comedy anywhere produced a better score?

Gilbert himself condoned judicious updating—he hated to have his jokes fall flat and, well, ladies from the provinces no longer try to waltz when they come to town, don’t you know. That sort of thing. So the patter songs are extensively remodeled (“The she who takes you shopping and demands ‘Do I look fat?’” was a line I think I caught, and imperial punishments are administered for excessive use of Botox and Instagram, but most of the libretto is come scritto and very sharply pronounced. A G&S audience knows it by heart anyway, but there are newcomers, and new young generations to convert, and this will help them along.

For the past few years, alas, this particular show has drawn contumely from the correctness police for its take on Japanese civilization. Useless to point out that Gilbert knew nothing of Japan but what was then, in 1885, on display in Knightsbridge at a special trade show from a land newly opened to western contact. While he did his best to get the backgrounds and costumes and movements right, he invented all the rest from his genius for high Victorian foolery, and Sullivan borrowed one or two folk tunes but otherwise created “Japan” just the way Verdi created “Egypt” and Delibes “India” and Bizet “Spain,” and as Rodgers would create “Siam” and Dmitri Tiomkin and Nino Rota “the Wild West.”

Hardly anyone in the West in 1885 knew a real Japan with which to compare theirs, and fewer cared. But today, having somehow survived Madama Butterfly, Iris, Sayonara Mon Amour, Pacific Overtures and Tea House of the August Moon, we are all more sophisticated. We want our Japan to have some connection other than ornamental with reality. Or else.

This has brought crisis to Topsy-Turvydom. Realism and Nonsense are even stranger bedfellows than a tiny baritone and a vast contralto. How can the bellowing blast of Political Correctness be tamed so that the laughing breezes may once more fill Sullivan’s tuneful sails? And don’t say “Jazz it up”—they tried an (all black) Hot Mikado in the 1930s, and it was quite a hit but very dated now. The late Jonathan Miller re-set the piece in an English seaside resort—mercifully, free of realism, and the characters’ names went by unnoticed. (Pitti-Sing? Pish-Tush? They aren’t Japanese. They might be anything, but they couldn’t be Japanese. In Iris, Mascagni names his characters Osaka and Kyoto, which is Japanese all right, but causes … other problems.)

The NYGASP solution is a very brief prologue written by director David Auxier-Loyola, with Gilbert, Sullivan and their producer, D’Oyly-Carte, quarreling over the new show, Princess Ida, and how to write the next one. Carte presents a veritable Chinese box of Orientalia (vases, jars, screens, fans) and somehow Gilbert is beaned by a samurai sword. He falls unconscious and—we’re in dreamland! Gilbert has now become Pish-Tush, Sullivan is Ko-Ko, Carte is Pooh-Bah, the set by Anshuman Batia is a railway depot in a dreamy Hokusai landscape and the costumes by Quinto Ott are wildly colorful mixups of the Japanese, the Steampunk Victorian, the Klingon, the what-have-you, sending up everything and nothing. They sing that it’s all Japanese but you know very well it’s not. Gilbert is dreaming the whole thing. Take offense at that!

At the center of The Mikado’s ridiculous plot are three love affairs. The first, between the tenor (Nanki-Poo, itinerant wandering minstrel) and the soprano (Yum-Yum, professional ingenue), is not terribly important—W.S. Gilbert never cared much about lovers. They love each other, at first sight, because they are the tenor and the soprano. That’s as deep as it gets. I’d be more curious about his penchant for overbearing and oversexed elderly ladies determined to marry much younger (and smaller) men, but the Freudian musical did not really take off until Gershwin & Weill’s Lady in the Dark, 55 years after The Mikado.

The lovers in G&S are the McGuffins who propel the Rube-Goldberg-machine plots and at the current New York Gilbert And Sullivan Players production, they are handsomely enacted by a tenor named John Charles McLaughlin, handsome but a bit hoarse last Saturday, and a soprano named Sarah Caldwell Smith, who produced, out of a bonnet as it were, a surprising top note to conclude Act I but was otherwise unextraordinary. I have known Nanki-Poos to be frankly embarrassed by the kissing duet, but McLaughlin gave every sign of enjoying it, and they madrigaled amiably.

Far more important are the love affairs of Ko-Ko (tailor, condemned to death for flirting, then promoted Lord High Executioner because … well, because—there’s a song to explain it, but it doesn’t) and Pooh-Bah (Lord High Everything Else). Ko-Ko is truly, madly, deeply in love with himself, even to the point of renouncing his fiancée to save his own skin. Pooh-Bah doesn’t exactly admit the independent existence of anybody other than his own exalted self. If these two distinct and contending models of self-idolatry are on point, the rest of the show rolls along, and The Mikado will remain relevant as long as egotistical and corrupt civil servants are features of our—any—civilization. Updating is barely necessary—though, at NYGASP, Pooh-Bah takes PayPal.

Ko-Ko is performed by tiny David Macaluso, who also plays Sullivan in the pre-show and sports that half-Italian tunesmith’s well-barbered curls and handlebar mustache. He spins about the stage like a top, constantly mugging and conniving and cutting up, and while he’s shameless putting over the jokes and the patters as well, he actually gets some sentiment into “Tit-Willow.”

Matthew Wages portrays Pooh-Bah with the proper down-at-heels grandeur. My problem was that he seemed as be-giggled by his performance as anyone else was. Pooh-Bahs, in my experience are funnier the more gravely and humorlessly they take themselves. Pooh-Bah really believes a decapitated head would bow to him—and that it should have if it didn’t—and furthermore, that the Mikado of Japan would find the story worth hearing.

The trio of “creatives” is rounded by Gilbert, performed by David Auxier, who manages to insert himself into the action in the role of Pish-Tush. Their merry ensemble meditation on human self-sacrifice (“I am so proud”) is delectable, the wordplay and harmonies and the whirling color of the costumes creating a charming effect. Is this what Puccini was aiming for with Ping, Pang and Pong? But he bored us with his bureaucrats; Gilbert makes even bureaucrats funny, and Sullivan makes them winsome.

David Wannen fills out the male side of the cast as the titular tyrant. He is tall enough and grim enough, and his costume appears to mingle the nautical uniforms affected by the Meiji Emperor with a dragonish helmet and epaulets from Game of Thrones. Between the costume and the blocking (he is obliged to sit enthroned or stand aloof a good deal), it is fortunate the poor fellow has fiercely expressive eyes that dart the thunderbolts of rage, disgust, boredom and self-admiring hilarity all about the stage, and that he has the vocal depth for “My object all-sublime.”

Yum-Yum is ably assisted by two other little maids (who won’t have to wait very long, they say), Rebecca L Hargrove as Peep-Bo (a thankless part, but she looks attractive) and Amy Maude Helfer as Pitti-Sing. Miss Helfer has an intriguing near-contralto that might be impressive in serious music, and a mouth made for sarcastic asides; she deployed both of them well.

That leaves us alone and defenseless with Cáitlin Burke’s Katisha. Curiously gowned but even more curiously collared (are those dead thorn bushes sticking up around her neck?), Burke manages to brood in loud and far from uncertain terms, with the nimble tongue for “O fool that fleest my hallowed joys,” so that we can be genuinely surprised when she kicks up her heels in “There is beauty in the bellow of the blast” with her prey—I mean her new pupil—Ko-Ko. Macaluso’s eye begins to sparkle in this duet and we have hopes that their union will work out after all. And Burke is the first Katisha I’ve known who went so far as to expose her best features—her left heel and right elbow—in order to seal the deal.

Joseph Rubin alternates the conducting duties with company director Al Bergeret; I heard the former. The small, feisty orchestra (I liked the flutes when they mimicked Yum-Yum’s bridal nerves; the tympani, as Ko-Ko pointed out, rather overdid it) only occasionally lost the characters on stage. (There’s a lot of words to get out!) The chorus were homogenous except in their costumes, which were “period” when not downright “semi-colonial.” They moved props into and out of place as imperturbably as D’Oyly-Carte would have liked.

The genuine Japanese phrases Gilbert proudly inserted in the choral parts were sung in English couplets with altered meanings. I suppose the justification is that, even when fast asleep, Gilbert would not have been fluent in Japanese, eh? (Neither was Sondheim.)