Every snarl and shimmer

Yannick Nézet-Séguin and the Metropolitan Opera Orchestra reigned supreme at the opening night of Wozzeck on Friday evening, rendering every snarl and shimmer of Berg’s score with gripping intensity. 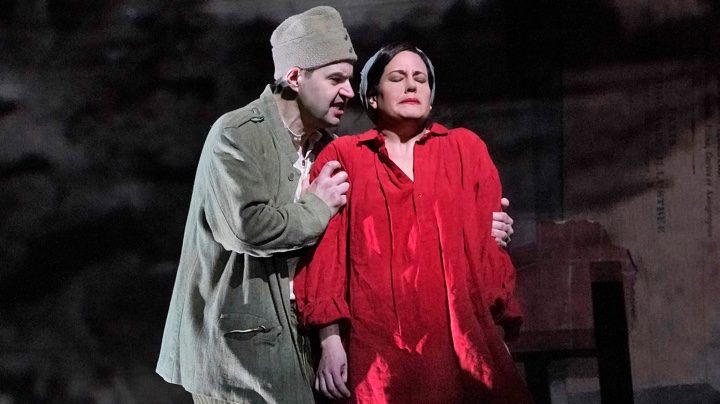 The music of Wozzeck evinces Berg’s longtime preoccupation with musical form. Each scene is an atonal gloss on some antiquated musical structure. There is a passacaglia, a fugue, and even a sonata-form movement, which combine to give each scene a unique formal fingerprint.

In less adept hands, this non-stop parade of classical forms can seem parodistic, finicky, or even downright nostalgic. Nézet-Séguin, however, downplayed Berg’s formal architecture, emphasizing the sonorous alchemy of each musical moment, perhaps slightly at the expense of forward drive.

And there was many a bewitching musical moment: the radiant cuivré of the brass was all the more electric when set against a particularly silvery string section, while the sinewy woodwind phrases (which sounds so curmudgeonly on many recordings) were lean and agile. Nézet-Séguin did not shy away from the gut-wrenching beauty of Berg’s score, and he often lingered on gossamer quartal harmonies – delicately voiced in the strings and the harp – providing much-needed relief from the twelve-tone din.

Nézet-Séguin’s vivid interpretation reached its apex in the orchestral interludes which link the opera’s fifteen scenes: under his baton, these interludes were not merely scene-change filler, but exhilarating timbral vignettes, whirlwinds of color which breathlessly catapult the listener from scene to scene.

The most impressive of these interludes was the brief transition which links the second and third scenes of the third act, in which a single note twice swells into a tutti cluster chord and a flurry of drums. Here, the Met orchestra delivered a level of brutality which far trumped any of the onstage horrors. 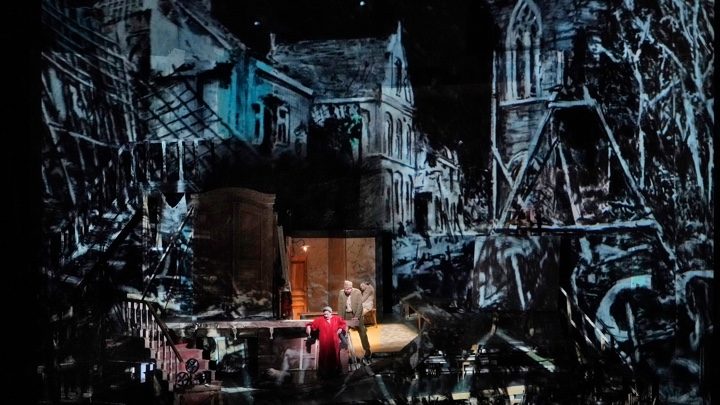 Set against this blistering orchestral backdrop, the cast often failed to conjure the kind of expressionist color that the score demands. Indeed, audibility was a problem across the cast, with many a line swamped by all the orchestral activity (although this is a consistent problem with Berg’s score, it seemed particularly pronounced in this performance).

Despite these balance issues, the singers and orchestra were consistently in sync, the vocal lines delivered with a pinpoint accuracy that mapped perfectly onto the incisive orchestral playing. This was a slick performance across the board, a testament to Nézet-Séguin’s clear vision for the work.

Wozzeck poses a number of particular problems to its singers: the vocal lines are equal parts gnashing Sprechstimme and lyrical arioso (punctuated periodically by a number of other extreme vocal effects), and although these are all meticulously notated in the score, balancing these modes of delivery proves a perpetual problem for interpreters of this work (indeed, Schoenbergian Sprechstimme has generated something of its own “historically informed performance” movement).

At Friday night’s performance, some singers were more successful than others in negotiating these vocal twists and turns. Peter Mattei’s Wozzeck, for instance, was almost staunchly lyrical, even in the character’s most harrowing scenes. While Mattei’s enduringly sweet baritone added a degree of pathos to his character’s gradual descent into madness, the role seemed to call out for a little more grunt and a touch more vocal variety. Mattei’s Wozzeck was far more bel canto than Second Viennese School.

Pivotal moments in Wozzeck’s character arc were woefully underplayed. For example, when Wozzeck drowns himself at the end of the opera, he truly believes that he is drowning in his wife’s blood, yet Mattei’s “Ich wasche mich mit Blut” was all too mellifluous for the strained paroxysm that the drama calls for. 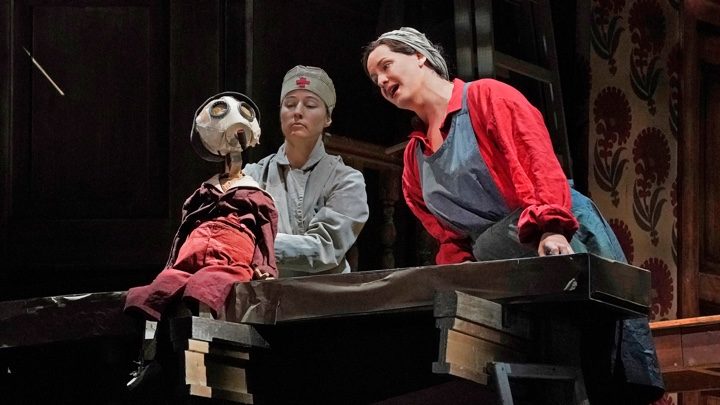 The refreshing upside to Mattei’s performance was the chance to hear (for once) all the notes that Berg wrote for his title character, sung with warmth and accuracy, and phrased with elegance. The downside, however, was that much of the work’s emotional catharsis was lost, suppressed by a sea of dulcet tones.

If Mattei’s Wozzeck was bland but beautifully sung, Gerhard Siegel’s Hauptmann was too much Charakter- and not enough -tenor. Although Siegel can honk and shout with the best of them, the few lyrical moments that Berg writes for this character might have benefitted a more seductive musicality and a more sugary tone.

The Hauptmann is, of course, a grotesque figure, but Siegel’s performance would have been all the more monstrous if the character’s vocal excesses were contrasted with something less harsh. That being said, Siegel was well attuned to the dramatic niceties of the role (the Hauptmann is, at the end of the day, just an amplified Mime), pivoting with ease between horror and farce in a performance that was both disturbing and thoroughly watchable.

For me, it was Elza van den Heever’s Marie which best balanced the various vocal effects which Berg’s score calls for. This was, perhaps, a tad ironic, as van den Heever’s performance was also the most vocally fraught: the middle register had a wide, pale quality and frequently failed to project over the orchestra, and her performance was mired by precarious pitching, obvious even within the general dissonance of the score.

Yet her performance was captivating, honest, and colorful: her Sprechstimme was wrought in an agonized, unashamedly strained chest voice, while her tectonic high notes were a searing counterpart to Nézet-Séguin’s razor-sharp conducting. Indeed, not only did van den Heever embrace the role’s hard edges, but she found interesting and varied ways to place them within her voice. If this experimentation also exposed a host of vocal faults, this somehow only contributed to the overall effect. Surely if there is any opera in which an imperfect but impassioned performance can outshine one that is polished but safe, it is Wozzeck.

Marie is so often subject to stale, burlesque treatments, portrayed either as a wanton grisette or a desperate housewife; van den Heever’s Marie, however, was haggard and worn with the weight of her poverty, flickering naturally between a warm vulnerability and a cold aloofness. Her capitulation to the Drum Major’s advances (played up by a suitably pompous Christopher Ventris) felt less like a salacious transgression and more like a moment of fatal resignation. 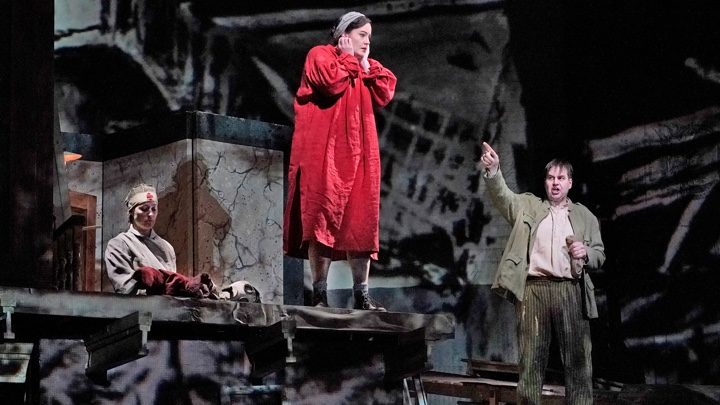 Christian Van Horn’s Doktor was another musical and dramatic highlight. Van Horn’s sneering performance was matched with a rich, robust sound and an imposing physicality. His Doktor was genuinely terrifying and even a little funny, sitting somewhere between Rocky Horror Picture Show and Hannibal Lecter.

Andrew Staples made a solid Met debut as Andres, taking on the character’s more florid lines with steely confidence. Tamara Mumford’s Margaret was as resolute as it was sassy, the mezzo making the most of a role that is almost exclusively Sprechstimme. The various cameos from assorted pub crawlers (including David Crawford and Miles Mykkanen as the Apprentices, and Brenton Ryan as the Fool) were all very accomplished, giving sturdy voice to Berg’s eccentric couleur locale.

Sadly, William Kentridge’s animations did not work nearly as well in this production as they did in his 2015 Lulu; the unremitting projections wound up detracting from the drama, splintering the narrative unnecessarily and drawing oxygen from the protean orchestral textures.

It has become du jour to set a production in the same period that an opera premiered, as if simply updating the action to the composer’s time will automatically offer fresh insights into the work. Kentridge’s choice to set his Wozzeck to the onset of the First World War is both lazy and passé – while Berg’s score may seem resonate with all the atrocities of the Great War (Berg was serving in the Austro-Hungarian army as he composed the opera), it takes more than simply changing the setting to bring these connections to the fore.

While it is true that Wozzeck is a soldier, Berg’s opera is really about the horrors of capitalism and the soul-crushing poverty it creates (Büchner’s play is very much a product of the Industrial Revolution, a biting response to the ghastly inequality it wrought).

Seeing the Hauptmann and the Doktor shamelessly exploit Wozzeck’s desperation for their own sadistic designs immediately conjured chilling resonances with today’s “gig economy”: the Doktor’s attempts to control what Wozzeck eats and even when he urinates called to mind all those Amazon workers forced to work long and grueling shifts without toilet or lunch breaks.

However, any relevance that this opera might have held was totally obscured in this production, smothered in a blaze of animated blimps, doodled gas masks, and projected battle plans. All this militaristic imagery felt entirely removed from the themes of the plot, a superfluous afterthought (quite literally) crudely imposed onto the action of the opera.

With no obvious connection to the story, these animations were more distracting than insightful, and set against Nézet-Séguin’s intentioned take on Berg’s score, they felt particularly haphazardly placed. The visual bravura of Kentridge’s animations boiled down to an assortment of tired horror-film tropes and empty signifiers which belied a politically derelict production.

The worst thing about these animations, however, was that they took away from the complex interpersonal drama of the plot. Kentridge (and his co-director Luc de Wit) seemed to employ the projections as a poor substitute for finely tuned dramatic tension. The result was a production almost devoid of intimacy and urgency, stunning to look at but boring to sit through.

This was not helped by Sabine Theunissen’s arte-povera set design, which saw the singers perched awkwardly on a series of dangerously sloped ramps. At the crucial moment that Wozzeck murders Marie, Wozzeck had to execute an ungainly 180-degree turn on one of these ramps, undercutting this key dramatic moment with a piece of particularly wooden staging.

Another hackneyed trend in contemporary opera productions is to replace a significant but silent child role with a puppet (presumably because an adult-controlled puppet is more reliable than a child actor), and – sure enough – in Kentridge’s production, Wozzeck and Marie’s illegitimate child was rendered as a (particularly two-dimensional) dummy.

This had the effect of totally cutting the child off from the rest of the action: Marie barely interacted with him, and a few nurturing glances from van den Heever could not make up for how clumsily detached he was from her. In the opera’s final scene, as the other children callously inform the child that his mother is dead, this ersatz child just stood there as the other children’s voices echoed from offstage, spoiling the cruel irony of the moment (I mean, how do you empathize with a cardboard cutout?).

The animations in Kentridge’s Lulu production worked so well precisely because Lulu is always projecting a new image of herself to those around her: Kentridge’s animations neatly followed her ongoing attempts to recast her identity in light of her changing circumstances. Wozzeck is an altogether different kettle of fish: the opera’s title character has almost no agency and almost no identity until his final (lethal) attempt at self-assertion, and Kentridge’s production failed to capture this dramatic watershed.

One wonders whether Kentridge updated the opera’s action to the 1910s, not because the opera calls for it, but because his visual style is so bound up in the age of film reel and movie projectors. I couldn’t help but feel that this production was more a vehicle for Kentridge’s aesthetic than it was an earnest take on this tragic tale. Either way, this new production never quite matched the musical delights that Nézet-Séguin’s interpretation offered.