Heartbeat Opera has set Der Freischütz in a contemporary era, in a rural locale where gun culture reigns supreme and bullying is natural. 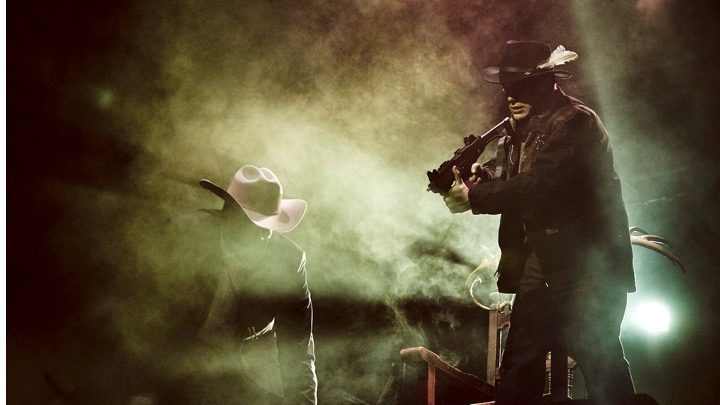 Der Freischütz, with its pre-Wagnerian tunefulness and fascinating orchestration, keeps arousing interest. Weber’s singspiel has had at least three stagings in New York in the last few years: by Utopia Opera, the Bronx Opera and now Heartbeat Opera.

I missed the first two, but friends of mine were delighted with the inventive presentations. Heartbeat Opera is fielding two casts through next Sunday at Baruch Performing Arts Center east of Madison Square, and I heard them on Friday and Saturday nights.

Der Freischütz has been called the first German folk-culture opera. Naïve peasants with quaint pieties had turned up in comic operas before 1821, but their love stories and soul-risking adventures were not the fare of serious German opera. In the wake of Freischütz’s triumphant success came the folkloric operas of Marschner, Hoffmann, Spohr, Lortzing, von Flotow, Schumann and, ultimately, Wagner.

Freischütz is also an early example of stage-gothic, the macabre effects of the dawning romantic era, set to evocative music in the air of the deep, Germanic forests. (This was the era of the Brothers Grimm, remember, the original source of the libretto—though with a far harsher ending.) Audiences reveled in the tales of superstitious peasants set, comfortingly, long ago, in the era of the Thirty Years’ War, but they also liked the frisson of theatrical terror. It filled a shadowy place left vacant by the fading of traditional religion. Soon, someone foretold, there would be movies. With soundtracks.

At Heartbeat, the opera is sung in the original German with an English version of the dialogue. The rich, atmospheric orchestration has been cleverly reduced to seven persons on traditional instruments who double on eccentric or electronic ones (singing saws, woodblocks, marimba, rattles, electric bass, accordion), which enhance or imply the supernatural and satanic themes. Much of the singing is awfully good and the staging is often inventive and performed with skill and focus.

Offense might be provided to the senses of some attendees in the smoke and dry ice that accompany the Wolf’s Glen—in this version Wolf’s Canyon. In the tall Baruch Theater with the seats arranged around a catwalk as if representing forest pathways, you never know where the action is going to take place next—keep your eyes peeled! But some of us do like it when the tenor and soprano are howling their last duettino right in my ear. 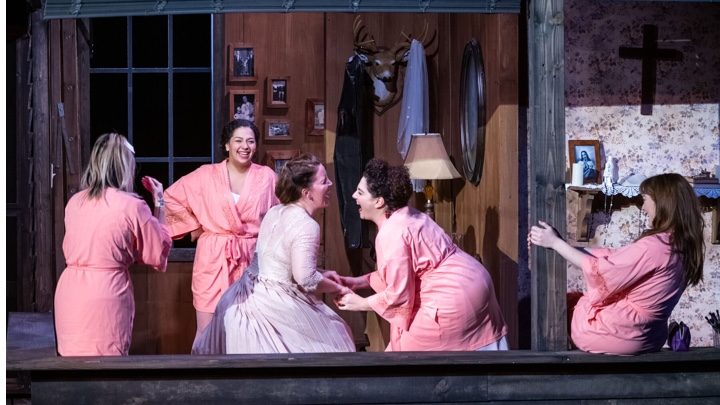 Heartbeat has set the piece in a contemporary era, in a rural locale where gun culture reigns supreme and bullying is natural. The dialogue (why didn’t Lachner or somebody make recits out of it?) is embarrassing in every version of this opera, and hillbilly accents do not help.

Neither does Kaspar, when possessed by the demon Samiel (a dancing female in this version, though her few lines are sung by a taped basso), really need to slip meth into Max’s shot of whiskey. It may or may not be useful to learn that Kaspar’s a vet who has learned black magic in the army. Is Samiel an Iraqi djinn? Can we blame the Magic Bullets on PTSD? But these changes are simple and acceptable—they have no effect on the music or the plot line.

But the show goes on to change the Hermit, Weber’s benign deus ex machina, into a guerrillero armed with an automatic rifle who threatens to gun down the entire chorus. (They shriek a lot.) He is renamed “Max’s Shadow,” and whether he is real or summoned from the subconscious is unclear from the director’s note. Two performances were not enough to explain to me what he was supposed to be doing in Der Freischütz.

Several of those attending asked me, going out, if I knew what on earth the ending signified, and all I could do was explain how the opera is supposed to end (piety triumphs; the devil takes his spoil and departs) and join them to deplore Heartbeat’s funky alterations. Think it through, guys. If you want this to be an anti-gun opera, you’ll have to write a few more scenes and maybe get Weber to set your diatribe to music.

Weber’s Max is a heldentenor in bud, and Heartbeat somehow fielded two of them, both capable of unstrained high notes and burly anguish over the (admittedly reduced) orchestration. Ian Koziara on Friday had the slightly more plush lyric instrument, but it was no hardship to have Casey Candebat replace him on Saturday.

The pure Agathe, Max’s true love and the prize of the shooting contest, is a role for an aspirant dramatic soprano—she was sung by the young Nilsson (her debut) and the young Sutherland. She must spin out long passages of accompanied arioso to enlist our sympathies for the arrival of the anticipated Max. Her arias, slow and portentous melodies, often defeat a singer’s attempts to bring her hopes to life. But in a small theater, with every expression visible, she has more opportunity to maintain rapport. 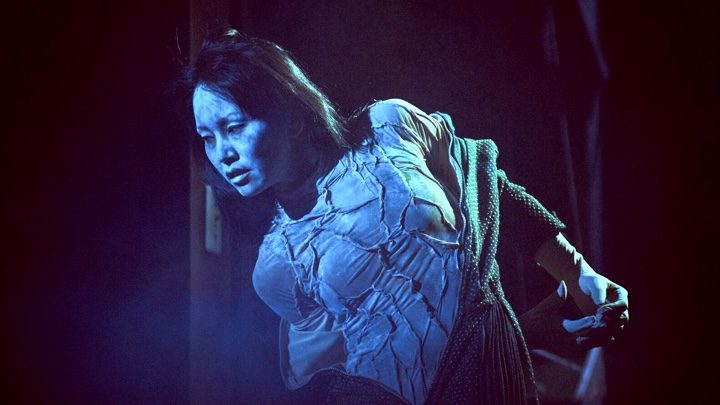 Summer Hassan has a sizable soprano of considerable quality and a fine, Germanic vibrato. She sang ardently in the Friday cast, but has problems sustaining pitch when intensity is called for. I was more impressed with Katherine Whyte, whose thinner voice held truer to the melodic line.

Agathe and Max’s fraught affair in the eaves of the threatening forest would probably bore any audience if left to itself, and it is a mark of Weber’s genius that he understood that. He set Agathe’s gloom off with a merry sidekick, Aennchen, said to have been modeled on the character of Weber’s own bride. Jana McIntyre on Friday and Nicole Haslett on Saturday both took the part with pretty, Rothenberger-ish voices that did not lack weight and held their own in trio with the lovers. Their acting, too, was up to Aennchen’s joking “ghost story” aria.

The villainous Kaspar (or are we meant to sympathize with a “damaged” soldier?) was taken on Friday by Derrell Acon, a perfectly acceptable light bass and a sinister presence. On Saturday, though, we had Daniel Klein, whose edgy, angry acting turned the whole drama up a notch or two. He seemed genuinely on the edge of mania—which was true of most of the characters. But with Klein, you felt it.

azumi OE, a Butoh-trained dancer and choreographer, played the demon Samiel with abrupt and alarming physical transformations from several traditions. That Samiel was up to no good was clear from all of them.

The music-making was highly enjoyable, but my hat is especially off—waving in the air—for Daniel Schlosberg, who made the extraordinary reduction of the score to seven instrumentalists (whom he led from piano and accordion), forfeiting none of the beauty, the ominous glamour or the melodramatic thrust of Weber’s original. It was a pleasure to be reminded of the music’s many charms, and to hear them again a second night.

I am unconvinced by the two lengthy essays in the program that attempt to explain the alterations Louisa Proske and Chloe Treat have made in the conclusion of this thumpy old libretto, turning it into something that goes clunk in the night. But the excellent bunkhouse set and the lights and haze and spookiness of the Wolf’s Glen—oops, sorry, Canyon—were appropriate and atmospheric. The sets, lighting, sound, electronic music and props designers are all to be congratulated, though I have no idea how to apportion the praise.