The three faces of Sondra

It was a gloomy, chilly, rainy day in Chicago on Sunday afternoon, a perfect reflection of the sad and gloomy fates of the title characters in Lyric Opera of Chicago’s presentation of The Three Queens. 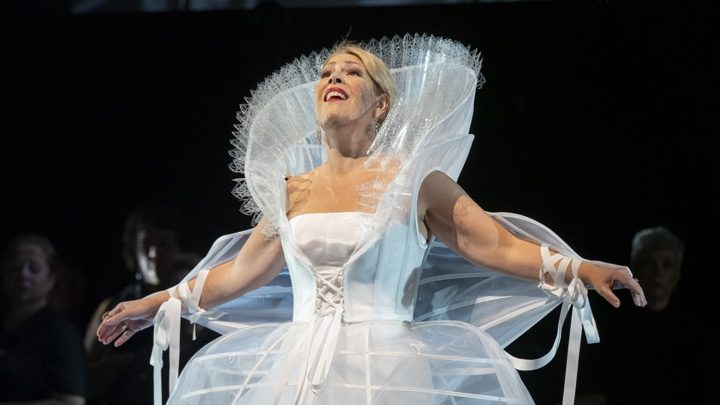 The program consisted of the climactic scenes of Donizetti’s operas Anna Bolena, Maria Stuarda, and Roberto Devereux, all sung magnificently by soprano Sondra Radvanovsky, supported by singers of the Ryan Opera Center.

Radvanovsky was in glorious voice, her shimmering soprano perfectly suited to the bel canto fireworks of Donizetti’s heroines. She also differentiated the three queens with subtle changes in carriage and bearing. Anna Bolena wavered between madness and reality, Maria Stuarda was steadfast and sung with touching simplicity, while Elisabetta from Roberto Devereux was all self-loathing and ferocity.

I noticed from the outset that some new qualities have entered Radvanovsky’s vocal estate, particularly the size of the instrument. Especially in the high reaches of her voice, the sound was immense and had something of a slashing, metallic quality reminiscent of Nilsson.

Yet she was able to bring down the voice to thread-like pianissimi that ravished the ear. The voice is even throughout the registers, and the tone is pure and clear. I’ve also not previously heard the soprano employ so much powerful chest voice, which made Elisabetta all the more potent. It really was a complete performance, a singer at the top of her game. 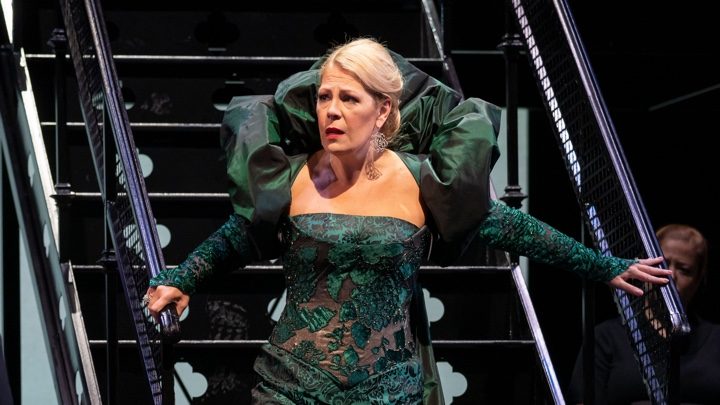 Each of the three scenes began with the bel canto specialist Riccardo Frizza leading the Lyric Opera Orchestra in each opera’s overture. It was a bouncy, precise reading of the score, showing how Donizetti often employed music that sounds much happier than the subjects of these operas. Equally fine were the somber, reflective passages.

And the audience chuckled and cheered when the reference to “God Save the Queen” was played in the Overture to Roberto Devereux. The only problems during the overtures were the distracting, annoying, and completely unnecessary projections in huge block letters on the black scrim, explaining in the silliest of terms what happens in the opera before the scene we are too see.

The first was “HENRY VIII LOVES…” then the next slide says “JANE SEYMOUR.” This and other projections drew inappropriate laughter from the audience, covering the music of the overture. 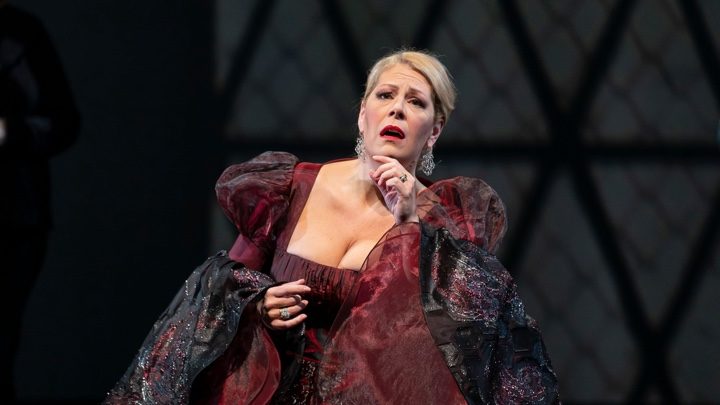 A great deal was made of Radvanovsky’s gowns designed by Rubin Singer, a different gown for each scene meant to “evoke the operatic and actual queens without being historical artifacts.” I think this was actually achieved in Elisabetta’s white “ghost gown”, but the gowns for Maria Stuarda and particularly Anna Bolena frankly looked uncomfortable with the huge “wings” on the shoulders. They seemed over-decorated, overly busy, and just plain over-designed.

But, all caveats aside, it was a thrilling vocal showcase. Radvanovsky triumphed. Among the highlioghts were a tender, reflective “Al dolce guidami” as Anna remembers better times, Anna’s furious “Coppia iniqua” with its coloratura pyrotechnics, and Maria Stuarda’s gorgeous prayer. The entirety of the Roberto Devereux was a highlight, as Radvanovsky flung herself into the role’s terror and rage.