The Berta (mezzo-soprano Emily Damasco) runs away with the show. 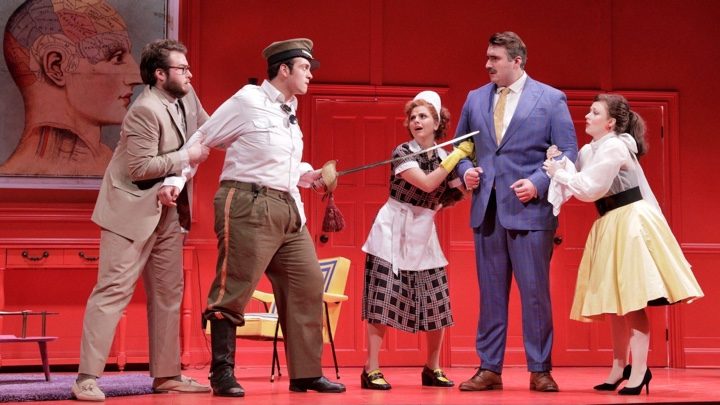 I doubt this has been said of many Il Barbiere di Siviglia performances, but it’s my review and I’m sticking to it: the Berta (mezzo-soprano Emily Damasco) runs away with the show.

At Curtis’s opening night, it was Damasco in the Act I finale whose glowing high notes illuminated the line as one rarely hears (the character is usually undercast vocally and—perhaps for intended compensation—annoyingly overacted). In Act II, where Berta’s aria so often feels like a wan comic place-filler, Damasco not only truly sang it—she also brought vivacity and sparkle.

It didn’t hurt that this production’s take on Berta as a saucy maid in an antic sex farce was director Chas Rader-Shieber’s most inspired idea. In any case, when she was on stage all the elements were delightfully in alignment. The other principal performers have fine voices and each scored some points—but the key takeaway on Thursday was Damasco.

If Damasco’s success as Berta is due in part to Rader-Shieber, it also has to be said that the production’s overall theatrical style feels off-key and inchoate. To call this Barbiere  a concept production would be underestimating—it’s a concepts (plural) production, and most of them don’t add up.

Our initial glimpse of the set—two walls with six doors, all luridly lit in red—suggests a bordello. (Jacob Climer designed the nifty-looking scenery). But when Almaviva and his friends arrive, we seem to be watching college boys in letter sweaters, involved in some kind of fraternity prank.

Minutes later, Figaro arrives—clad in psychedelic-print pants and Beatle boots drawn from yet from another world entirely. Rosina here looks like Annette Funicello, and don’t even get me started on the chorus. (Climer also did the costumes—res ipsa.) In the first scene, there’s also a weird moment of gender-bending that disappears almost instantly, while imagery suggesting phrenology and mesmerism is unexplained.

One or two of these ideas might have been developed into an intriguing take on Barbiere, but nothing stays around long enough for us to find out. Instead, it’s a directorial salad bar. As for those scenery doors, they, of course suggest, farce—but the staging here isn’t imaginative or precise enough to make it pay off.

Frankly, I’d welcome a rethought Barbiere—too many productions invoke tired theatrical clichés. But here, Rader-Shieber and company likewise fall back on hoary schtick, with lots of mugging and gesticulating.

Musically, the show is on firmer ground. I liked Christian Capoccia’s conducting particularly in the overture, which emphasized the rather furtive and jittery qualities in Rossini’s magically fast-moving scoring; and the Curtis orchestra played well throughout.

Vocal honors were taken by Merissa Beddows’ Rosina—though a soprano, she brought surprising reserves of tonal color to the lower range, and generally dispatched the fioratura with élan. I prefer a less hoydenish take on the role, but Beddows’ was also very much on the words, and dramatically engaged.

Joseph Tancredi (Almaviva) has an exceptionally lovely tenor with more substance than one often hears in this role, and his coloratura is clean and nicely bound into cohesive phrases. Ben Schaefer brought a good lyric baritone and a lot of personality to Figaro. Adam Kiss’s Bartolo did very well by his buffo patter, but the basic tone was grey and lacked a strong core. Able support was provided by Thomas Petrushka as Don Basilio, who admirably resisted over-acting in “La calunnia,” and Andrew Moore, a tonally commanding Fiorello.

Good as all the principals were, they would do well to remember that even bel canto high comedies are indeed… well, bel canto. In addition to virtuosity, each of these roles (Almaviva especially) provide opportunities for elegant lyricism that here were sometimes underserved. I also wish the ornamentation—an absolutely central issue in this kind of music—had been addressed with more flair.

Still, as so often at Curtis, the promise of great things to come was palpably in the air throughout. I imagine we’ll be hearing more from all these talented young singers.

For now, though, as Stephen Sondheim observed, “Everybody ought to have a maid.”