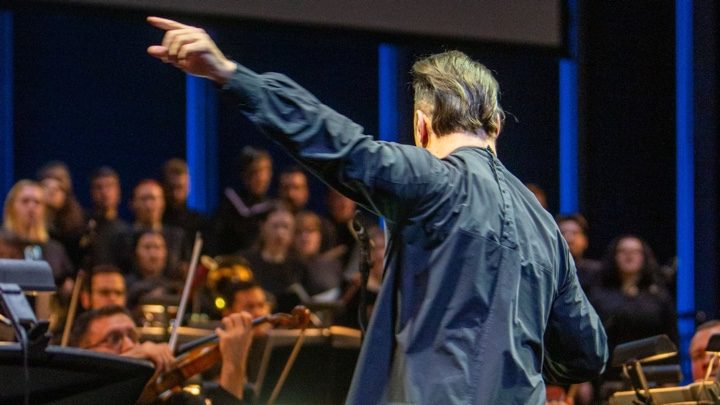 Use whatever means needed (short of physical violence) to secure a ticket to the remaining two sold-out performances of an electrifying Verdi Requiem this weekend at The Shed led by controversial maestro Teodor Currentzis in his much-anticipated US debut—it’s possibly the musical event of the year.

Only being familiar with Currentzis from his fascinating but problematic recordings and videos of 17th and 18th century music, I was apprehensive about how he and his musicAeterna orchestra and chorus from Perm, Russia would approach Verdi’s oft-performed sacred work.

Like “iconic,” the term “revelatory” is carelessly thrown around these days but it would be difficult to downplay the astonishing ear-opening details that suffused the Greek conductor’s deeply-felt interpretation. Many listeners may find it eccentrically idiosyncratic but never before have I felt so intensely involved with a work that I’ve always tried to love but never succeeded… until last night.

The Shed is an arts center in the middle of the enormous brand-new Hudson Yards development located at the northern tip of the High Line on Manhattan’s far westside. For my first visit it was difficult to believe this used to be the mostly deserted area that I walked by on my way to work for nearly the entire 1990s. What I most remember were the barren acres of train tracks and a coterie of transgender prostitutes being picked up and dropped off by truck drivers each morning. Now that area is the home to some of the priciest housing and retail establishments in the city.

Thursday’s performance took place in The McCourt, the larger of the Shed’s performance areas. Its vast open space calls to mind a similar venue at its prime Manhattan rival in presenting expensive international cutting-edge arts programming, the Drill Hall at the Park Avenue Armory. As there, the audience was seated in rows and rows of vertiginously steep bleachers. As the ambitious Verdi was its first classical music offering, it will be interesting to discover how the Shed uses this enormous space in the future.

Requiem, commissioned by The Shed, brought together the Messa da Requiem composed by Verdi to honor the death of the great writer Alessandro Manzoni and a new cinematic artwork by Jonas Mekas, one of the pioneering figures of American avant-garde film. 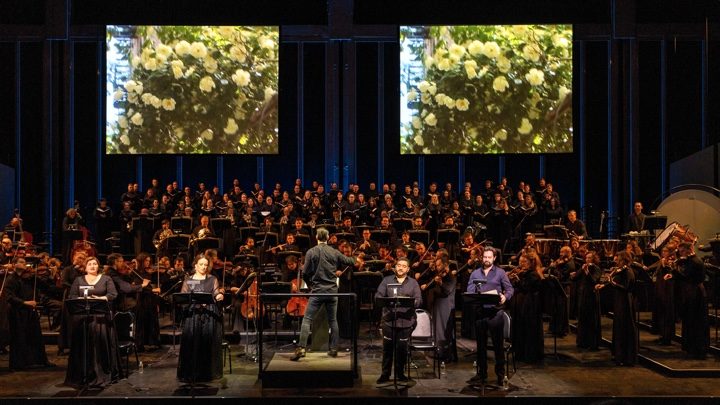 As a cinephile, I was initially pleased that the legendary but little-known Mekas would be receiving this attention but this, his final work as he passed away earlier this year at 96, proved one of stultifying banality. It was nearly impossible to find any connection between the music and the film’s roughly 90 minutes of shaky handheld footage of wild flowers interposed with occasionally horrifying footage of fires and earthquakes and human atrocities. But the performers were so extraordinarily interesting to watch, it was all too easy to ignore the distracting images projected onto two large screens at the back of the stage.

Verdi’s Requiem has always seemed to me a not-entirely satisfying quasi-opera in the guise of a liturgical work. However, for the first time in my experience of 8 or 9 live performances, it finally involved me as a deeply felt spiritual experience. Certainly, this was Currentzis’s intention as in dim lighting both the orchestra and chorus clothed in long black outfits resembling cassocks entered slowly and silently. In complete darkness the conductor then mounted the podium and began a haunting, achingly slow and whispered “Introit.”

Throughout, Currentzis exploited his large orchestra’s intense virtuosity and stamina drawing out kaleidoscopic instrumental colors and extreme dynamic modulations from barely audible pppps to thunderously apocalyptic ffffs at the terrifying final iteration of “Dies irae.” Although musicAeterna has often performed on historical instruments this didn’t seem to be the case with Requiem although the string players (including the violins and violas who stood the entire performance as is done in many HIP concerts) used less vibrato than one is used to hearing.

The chorus too shone throughout singing with intense, vivid concentration and awesome precision. At one point during the “Sanctus” Currentzis leapt in front of the podium and guided the 80+ member group at closer range though an amazingly delicate, even sparkling traversal of that movement. But then throughout the conductor, generally mouthing the sung text, was riveting to watch using some of the most unconventional gestures that I’ve ever seen as well most intensely intent cues to the four soloists.

His vocal quartet, while far from the starriest group I’ve noted, were wonderfully in tune with Currentzis’s unusual interpretation while not ceding their own individuality. Russian bass Evgeny Stavinsky may have lacked the buzzy thundering authority of many of his compatriots but he brought an awesomely effective gravitas and smoothly sonorous sound that reminded me of Nicolai Ghiaurov.

René Barbera, best known for his bel canto roles, used his tightly focused tenor with ringing delicacy and lavished nuance and careful shading on his moving “Ingemisco”—moving it far beyond the usual blithe tenor star-turn. If only he’d have refrained from licking his finger-tips every time he had to turn a page throughout! 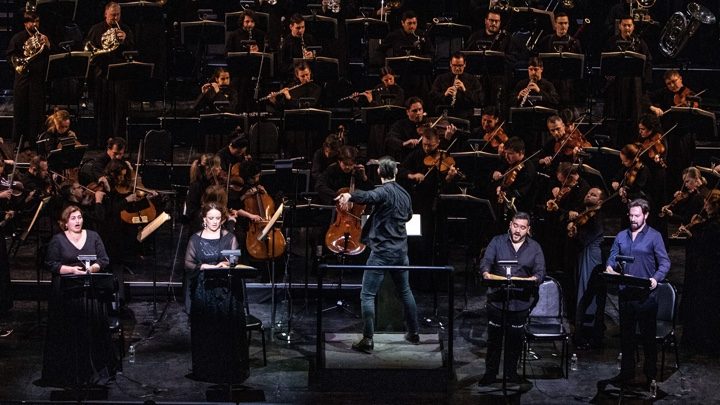 Somehow I managed to miss every one of Clémentine Margaine’s 23 recent performances of Carmen at the Met and thus hadn’t heard her since her promising Caramoor debut four years ago as Donizetti’s La Favorite. She has developed into a striking performer whose intensely dramatic and prayerful interpretation of the mezzo part anchored this special Requiem. The heavenly blend of Margaine in the “Recordare” with soprano Zarina Abaeva stopped time.

Thirty-two-year-old Russian soprano Abaeva was the surprise of the evening, a performer whose name I don’t remember ever even seeing before Thursday. Yet her serene and confident traversal of her demanding music was an especial pleasure.

One has experienced more overtly “operatic” performances of the soprano part, but Abaeva most fully into the reverential spirit with a quiet and rapt modesty as well as an unending arsenal of floating high notes. She left her position at the front of the stage after the “Agnus dei” and returned to perform a fierce “Libera me” from the center of the chorus—this novel configuration worked wonderfully well.

Much has been made of the “punk, pop” Currentzis with some calling him out as a fake and whose allure consists of just “smoke and mirrors” but I can’t agree. Granted his recordings of two of the Mozart-da Ponte opera (I haven’t yet heard the Don Giovanni) contain some of the weakest Mozart singing ever committed to disk, but they are also brimming with compelling ideas as well as, truth be told, some effects that merely seek to be “different.”

His Salzburg Mozart collaborations with Peter Sellars have been more consistent although his grafting chunks from other Mozart works onto La Clemenza di Tito didn’t work for me at all. A tendency to excess also mars his overblown edition of Purcell’s The Indian Queen but a delicious CD of Rameau’s music delights although it too is marred by wan singing.

But all those reservations were swept aside by Thursday evening’s extraordinary 90 minutes at the Shed. Almost all of his ideas there convinced to such a degree I absolutely felt I was hearing the work anew. The last time I met Verdi’s Requiem was two years ago at the Met and I swore after that dull afternoon I could go another decade without hearing the piece again. But if I thought it possible, I would gladly go again both Saturday night and Sunday afternoon for Currentzis and his wonderfully youthful forces!