What is opera for if not to commemorate a national epic tragedy and triumph? 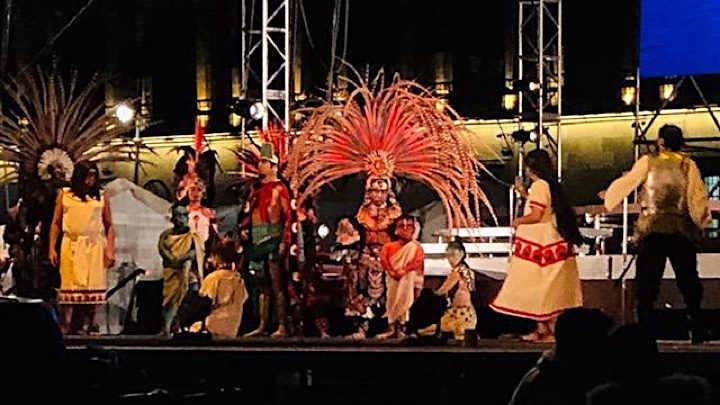 My first evening in Mexico, weary from planes, cabs, jackhammers in my bedroom, solitude in a strange, enormous city, I ambled to the Zócalo. Happily, my hotel is around the corner from it, in the heart of the elegantly crumbling historic center of the town.

But what lured me, once I reached the edge of the plaza, was singing. Operatic singing, though mediated through microphones. It came from a section in front of the Palacio Nacional. I drifted over. It’s like me, isn’t it, to waltz into a foreign night and stumble upon opera?

Imagine, New Yorkers, an irregular space the size of half a dozen Washington Squares. It’s even bigger than it used to be because, during an excavation in 1978, workmen stumbled on the foundations of the Templo Mayor, the pyramid once topped by temples and altars that had been at the center of the Aztec capital, Tenochtitlan.

The temples were demolished, but the Zócalo remained the center of the city and the nation that grew up around it. But who bothers to dig up the foundations of a pyramid? Why go to the trouble when you can just fill it in and build on top of them? So the foundations are still in place, nowadays with a museum.

I mention all this because the hologram backdrops of the opera being performed, Motecuhzoma II, depicted the Lake of Mexico as it may have looked in 1519 and, moving constantly, also showed us the pyramids, the temples atop them (with fiery, smoking urns), the two volcanoes that overlook the city, an ominous comet and the eclipse of a red, calendar-stone sun as omens to the Aztecs to watch out (Motecuhzoma ignores them).

It was spectacular to me, a stranger. But the story and its settings are familiar to every Mexican. The story is the national tragedy and ur-myth. And Saturday, November 8, by chance, was the five hundredth anniversary of the entrance into the paradisal city of Spanish conquistadors, briefly mistaken for divinities.

And what is opera for if not to commemorate a national epic tragedy and triumph?

The betrayal and abasement of Montezuma (sic) has been a cautionary tale for centuries. He was a popular hero of baroque dramas and operas. Settings by Vivaldi and Graun, among others, have survived—Graun’s scenarist was Frederick the Great—not to mention Spontini’s Fernand Cortez, revived in Florence last month. The operas moralize upon the hypocrisy of the church and the naiveté of the peaceful indigenes overwhelmed by covetous Europeans. These are good, sturdy themes that echo in every generation.

Vivaldi’s Montezuma, an opera of 1733, was long thought lost (like so many of his ninety-odd operas), but it turned up in tattered form in 2002 in Kiev. (Little known fact: The Vivaldis had a dacha in the Ukraine where they spent weekends. Okay, don’t believe me.)

The opera was thought unrevivable, but a Mexican composer, Samuel Màynez Champion, got ahold of it and, aided by several leading Vivaldi experts, turned it into a pasticcio opera. He used a lot of familiar non-operatic Vivaldi (the Gloria, the Seasons) plus indigenous music, with drums and rattles and dances devised by folkloric groups, and his own music to fill in blanks. The Vivalid was performed by six solo singers and forty musicians of the Orchestra of the City of Mexico, led by Francesco Fanna.

This was the spectacle I stumbled upon—though merely the Wednesday dress rehearsal, set to be performed and televised on the Friday and Saturday. (I returned Friday.)

The libretto, with spoken dialogue rather than recitative, was in Spanish, supertitled and, near as I could figure, it turned history into mythic legend. At the start, after a Creation Myth in costumed dance, we found Motecuhozuma ignoring business in order to dally with concubines and other delights. (A popular Hispanic trope, this: The fall of Gothic Spain to the Moors is blamed, in legend and folk song and the occasional opera, on the lust of King Rodrigo for Florinda, the daughter of one of his nobles.)

Motecuhzoma’s sister, a fire-breathing mezzo, denounces his behavior and urges their cousin, the warrior Cuauhtemoc, to seize the throne.

Meanwhile, a group of strangers with beards and plate armor, shows up on the coast. One of them, a gentle soul in a brown caftan and kipa, holds aloft a cross. The leader, Cortèz, bullies a local maiden named Marina, then seduces her. He is quite insufferable (singing warlike arias) until she tells him she is pregnant. This produces a duet and a soliloquy (“He’ll be tall and as tough as a tree—” but set to Vivaldi).

Marina, after some soul-searching, interprets for the guys in armor to the Aztecs. The guy in the kipa is overwhelmed with the beauty of the city (seen in hologram) and sings ecstatically about it. Enter the Aztec royal family and their spectacular court in full feather—no, that’s not a figure of speech! —with much elaborate reconstructed dance and a long, stately procession and, at last, Motecuhzoma II in a palanquin. He alights and confronts Cortèz—and they embrace. A blackout fills us with anticipatory doom. End of Act I.

This is not actually the plot of Vivaldi’s Montezuma, but the public and commemorative nature of the affair had no use for the fiction that provided half a dozen singers an opportunity to hold forth at length in eighteenth-century Venice. Màynez Champion’s revision served other purposes, and served them well.

There were no seats on the Zócalo—it was standing room only on the plaza. Everyone (except the little kids) followed the titles and the tunes and the action. Soda salesmen moved furtively through the crowd, sometimes pursued by stern policemen in uniforms that made me think of Manon.

Little kids, brought by their families, paid no attention but didn’t make much noise over the broadcast music. I couldn’t tell where the speakers were (there were probably many) and the singing was hearty rather than subtle in its approach to baroque style. I have been unable to find a cast list on line; just a list of unfamiliar names plus participating organizations.

There were, I gather, 150 people on stage, including 14 actors, 6 solo singers, 30 singers from the Staccato Choir, 14 dancers from the Tlatlikpak folkloric group (including a green-skinned ballerina enacting the torment of the Aztec mother goddess and two midgets playing priests attendant on the sovereign), the Yodoquinsi company that bases its inventions on indigenous traditional dances, 10 riders and, below, in a makeshift pit, 40 musicians.

And three hologram screens, to make the action visible to those of us stuck behind the tech folks on a central dais. The performance was livestreamed to elide with national commemoration of the half millennium. I have no idea how wide was the audience at home.

This was opera as public spectacle rather than focused drama. The story was familiar to every Mexican present, but the music and the dance and the holograms made it more vivid, as if they could see into the past.

This was once one of the functions of opera: to underline a national story, with superhuman singers to represent the superhuman national heroes. Cavalli’s Ercole Amante, Arne’s Alfred, Mozart’s Tito, Rossini’s Viaggio a Reims, Glinka’s Life for the Tsar, Verdi’s Nabucco, Wagner’s Ring, paid unsubtle tribute to ancestral, semi-legendary heroic figures and a highly mythicized national esprit.

There were elements here of the Son et lumière, the inaugural procession, the military triumph, the halftime show, the religious parade saluting saints long dead but imaginatively recalled. Opera has always been multi-disciplinary: new disciplines need not (necessarily) detract from the vocal art at the heart of its meaning.

Perhaps this joining together of performing forces (including set design, costumes and lighting—and the skills of selective broadcasting) and the audience drinking in the story and its many contrasting messages is a future of opera to a wider audience more credulous of the screen than of the news. Perhaps this is the sort of opera that HD broadcasts (very popular in Mexico, I am told) will make widespread and renew as an art for a less connoisseur audience.

That would be sad for those of us who delight in the unmediated sound of the voice reaching the open ear. But even we are accustomed to recordings, live and studio but in no case, obviously, more than an imperfect interaction with the voice, the training, the interpretation of genuine song.

As it happens, a purer sort of vocalism is far from dead in Mexico. After trying for fifteen years to establish a proper site for national auditions (defeated by red tape and other small-mindedness), the Metropolitan Opera was urged, three years ago, by former Met tenor Michael Sylvester, to set up regional auditions and championships in San Miguel de Allende, where he heads the San Miguel Institute of Bel Canto. San Miguel hosts an opera each year, in February—this year two of them, L’Elisir d’amore and L’Incoronazione di Poppea.

By chance, I had been invited to this charming colonial town the day before the celebratory concert of the four winners and four runners-up. The church of St. Paul, site of the concert, is small and spare (Protestant—the ancient local Catholic churches are baroque to a degree), the sound if anything too live. (The operas will be performed in a classic local theater.) But for solo voices and piano and a full house, St. Paul produced a highly rewarding concert.

Among the winners, I was especially impressed with Denís Vélez, a soprano with beautiful German, Italian and French diction—she sang Marietta’s Lied, Leila’s aria from Pêcheurs des Perles and the duet from Handel’s Rodelinda. Her voice is beautifully supported and her range even to an elegant top. It was a pleasure to learn she has been invited to join the Met’s Lindemann Program.

Her partner in the Handel, another winner, was the Mexican program’s first countertenor, Gamaliel Reynoso, who also sang “Va tacito” from Giulio Cesare and the brilliant “Non lasciarmi in tal momento” from Rossini’s Aureliano in Palmira. He possesses a fine, clarion alto that he can scale down for thoughtful arias, and he ornaments da capos gracefully.

Other ladies on the program (alas, no lower voices won this year) demonstrated excellent breath support and control, with an evenness throughout the compass that I found extremely gratifying, but some difficulty pulling in the fortissimo of a final note (in “Io son l’umile ancella” or “Pace, pace”). Uneven production and forte conclusions (let’s face it, they’re easier) are flaws often found in far more mature and famous singers. Here were young, sizable voices with good training and excellent instincts.