When I think of Nina Stemme’s voice, I think of gianduja, Armagnac soaked dark cherries, and chestnuts. 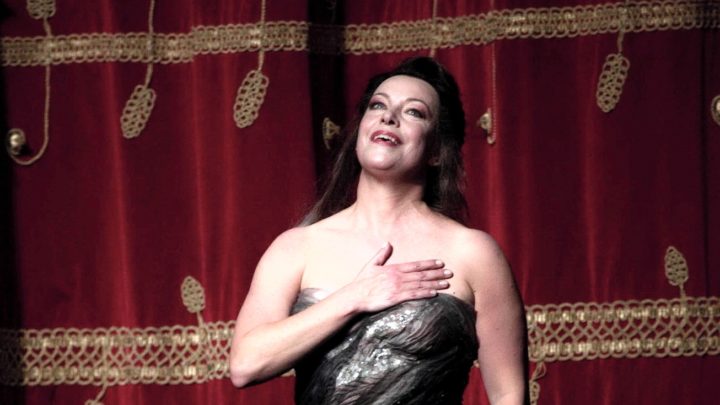 During the days when opera occupied a much more prominent place of celebrity and recognition in culture, chefs used to create elaborate dishes and desserts inspired by their favorite musical artists. The most notable creations associated with opera include Peach Melba.

This Escoffier creation that was elaborate in 1892 because ice cream was not commercially available, and frozen confections were a curio reserved only for high society; remember, in 1892 refrigeration had yet to be invented, ice cream had to be prepared from scratch, peaches had to be poached and spiced instead of purchased already cut up in heavy syrup.

Also in 1892, Amazon prime style transnational shipping and the Green Revolution had not yet been invented by humankind, so desserts like Peach Melba were seasonal and very special indeed.

I found the orange gelée a bit excessive and superfluous to what was already a superb concoction but what’s a Renée dessert without a superfluity of sugar?

Now, since I love opera and crafting complex desserts, I decided to create new European-style cakes in honor of my favorite modern sopranos. All cake recipes featured in this series were creations that I made for my past birthdays. Each of these cakes represent a facet of their personality and artistry.

They’re also delicious, elaborately operatic, and fit for a great diva.  While these cakes are time consuming to make and technically challenging, I hope that some of you will attempt to make these and serve them for a future dinner party. Preferably the conversation will be centered around all things opera and diva.

When I think of Nina’s voice, I think of gianduja, Armagnac soaked dark cherries, and chestnuts.

Both flavors are also remarkably popular in the dessert cultures of Italy, Austria, and Germany, coinciding with the same operatic literature that Stemme has excelled in over the last quarter century. 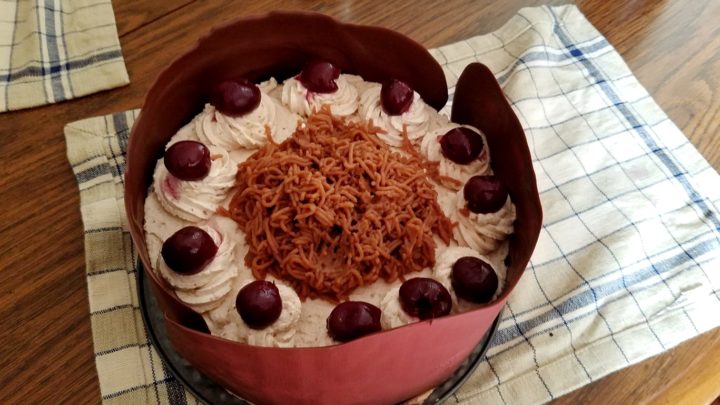 The cake is composed of a chocolate genoise split in half. Originally, this was a Sacher base, but I opted for genoise in later incarnations because of its more complementary texture. Nina also intoned that she finds the Sacher base a bit dry, to which I replied that I added a syrup with liquor to moisten the base. Which she approved!

This is a cake fit for a great Wagnerian soprano, a regal Isolde, and the greatest goddess of Valhalla.

Beat 5 eggs with sugar for 5 minutes until triple in volume using a KitchenAid mixer at high speed.

Whisk two cups of the egg into the cocoa mixture, fold well.  Fold the cocoa mixture into the remaining egg batter along with the flour and the clarified butter. Pour into the pan and bake at 350 F or 170 C for 30-35 minutes. Invert and cool.

* Unless you consume incredible amounts of hazelnut praline, I recommend purchasing hazelnut paste from this source instead of purchasing a 5 kg bucket from a Callebaut supplier!

Melt chocolate and keep warm at 45 C. In a stand mixer fitted with the whisk attachment, whip heavy cream to soft peaks; transfer in bowl. Clean up the mixing bowl and put eggs and yolks in; beat on medium speed.

Meanwhile, in a small saucepan, cook sugar and water to 128 C (soft ball stage). Increase speed to high and pour in thin stream and whip until very thick and the egg yolk falls from the whisk in thick ribbons. Whip in the hazelnut praline and melted chocolate until fully incorporated.

Fold in the whipped cream in increments until the mixture is lightened. Refrigerate until needed.

Puree the chestnuts and the chestnut spread in a food processor until very smooth.  Add the rum and sugar if needed to taste. Whip the cream in a chilled bowl to stiff peaks, and fold the cream into the pureed chestnut mixture to incorporate. Chill until ready.

Armagnac Soaked Cherries (do this a day before):

Combine the syrup from the cherries with the sugar and boil until the mixture is slightly thickened. When cool, add the cherries and the Armagnac. Allow the alcohol to soak into cherries for a day.

Puree all of the ingredients into a food processor and blitz until finely pureed. Place the mixture into a pastry bag with a chestnut “marrons” tip and refrigerate until ready to assemble. 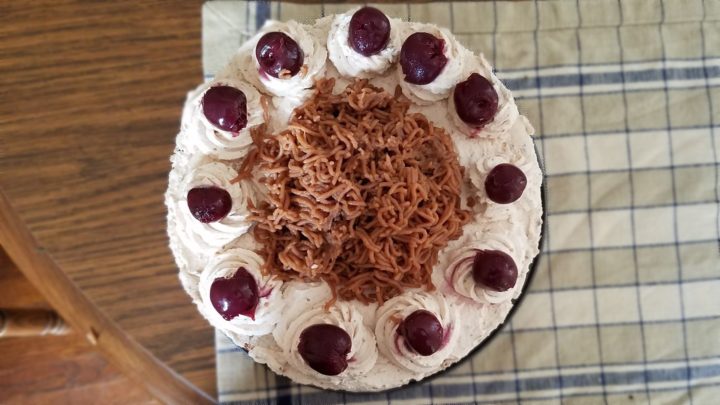 Assemble by slicing the genoise in half

Chill 10 minutes in the freezer.

Spread 2 cups of chestnut mousse on top of the hazelnut mousse and cherries.

Add the second layer of genoise on top.

Spread 1 to 1.5 cups of chesnut mousse on top of the genoise layer.

Pipe the chestnut Montblanc puree in a decorative pattern in the center of the cake. Leave about 3 cm rim to pipe rosettes of chestnut mousse on top.

Pipe chestnut mousse rosettes around the rim, 12 if possible.

Place a cherry on top of each rosette.