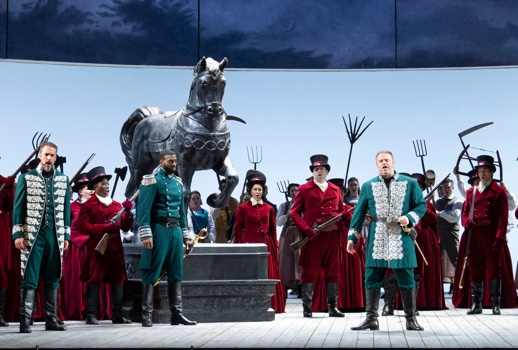 I have always celebrated Luisa Miller as the opera where Verdi came into his own as a mature artist. We have the Donizetti-esque bel canto of Act One, moving to darker and more complex themes in Act Two, and finally reaching the magnificent Act Three father-daughter duet followed by the lovers’ death scene that I would argue is as good as anything Verdi wrote thereafter.

We get to observe the composer move from the “galley years” early Verdi style to the far deeper, more complex music of his mature years that would soon bring us Rigoletto and La Traviata. And he does it over the course of the 2 hours and 45 minutes of Luisa Miller.

Lyric Opera of Chicago has only produced Luisa Miller once before, a single run in 1982. This is the first of what Lyric promises to be a yearly series of the early operas of Verdi, and this musically satisfying evening was an exciting kickoff to the series.

Conductor and Lyric Music Director Designate Enrique Mazzola started us off with a rousing overture, beautifully contrasting the quiet moments with powerful, crashing climaxes. The playing of the Lyric Opera Orchestra was remarkable in the overture and the rest of the opera, finding moments of rapturous delicacy as well as the dark, foreboding themes as the plot darkens.

Based on Schiller’s play Kabale und Liebe (Intrigue and Love), Luisa Miller’s plot is fairly standard 19th century fare involving innocent romance foiled by the cruelty of the morally bankrupt court of Count Walther. The contrast between the simple faith-based lives of Miller and his daughter and the desperate intrigues of the upper-class characters could not be clearer (a frequent theme of Schiller’s works.)

Luisa loves a young man named Carlo, not knowing that her love is actually Rodolfo, son of the powerful Count Walther. Walther, seeking to marry Rodolfo to a wealthy Duchess to consolidate his power, resolves to destroy Louisa’s romance through the machinations of his crony, the appropriately named Wurm. 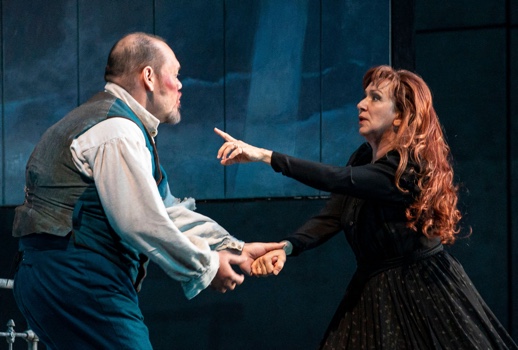 The tragedy is set in motion as Wurm forces Luisa to write a letter denying her love for Rodolfo and professing a passion for Wurm. Luisa submits in order to save her father, imprisoned by the Count. It all snowballs toward disaster and death.

Krassimira Stoyanova is excellent in the title role, vocally opulent and tossing off high notes with ease and beauty of tone. She navigates the coloratura fireworks of Act one’s “Lo vidi, e il primo palpito” with solid technique and flair, managing to bring much needed heart to the opening scene’s “Happy Peasant Birthday Party” antics.

I thought she was working a bit too hard to convey the character’s youth and innocence in the first act, but, as the opera turns darker, she brought a touching sense of vulnerability and delicacy that was musically and dramatically effective. Her phrasing and musical instincts were stellar throughout, and her final cries of “la man, Rodolfo!” tugged at the heart

Bass-baritone Christian Van Horn was a marvelous Count Walther, using his booming voice and menacing physicality to potent effect. His was a Count who, though outwardly dignified, seethed with desperation trying to cover up his murder of the previous Count. This character is too often played as a cardboard villain, and Van Horn wisely avoids that trap, creating a three-dimensional character.

I was equally impressed by the Lyric debut of bass Solomon Howard as Wurm. Howard has a splendid ease in producing dark, fluid, full-throated low notes, and he has a handsome presence and is physically expressive. He, too, avoids “twisting his mustache” in his lust for Luisa.

Lyric stalwart Quinn Kelsey brings a real loving sensitivity to Louisa’s father Miller, whether he is defending her from Wurm’s desire or expressing deep affection as he begs Luisa not to kill herself in their Act Three duet. Verdi had a real passion for father-daughter relationships, and the duet was moving and dramatically powerful. Kelsey’s voice sounded a bit smaller last night than usual, and could have used a more expansive sound, particularly in Act One. 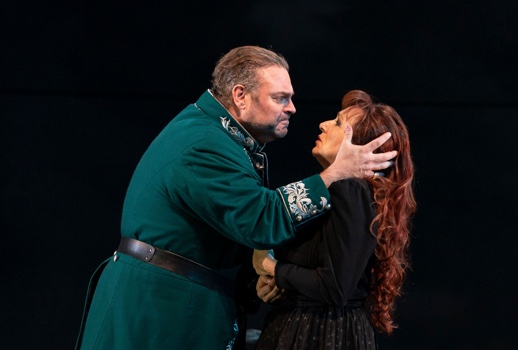 This brings us to a serious miscasting mistake that came close to spoiling the drama. Joseph Calleja, a tenor I have often enjoyed and admired, is here a dramatic cipher. Yes, he sings sweetly throughout (except for a ghastly crack near the end of Act One), but there is no evidence of the mercurial Rodolfo’s fire or passion here—the characterization is bland and dull.

Even his famous aria “Quando le sere al placido” was sung with great beauty but no sense of emotion. And in the scene that follows, where Rodolfo furiously threatens to kill Wurm, Calleja expresses no more than a mild pique. There was an alarming lack of physical expressivity as well, Calleja wandering aimlessly about the stage in some of director Francesca Zambello’s most awkward blocking. All evening I kept thinking that Calleja was trying to sing Rodolfo in the elegant French style instead of singing with Italianate emotionality.

The San Francisco Opera production worked very well for the scenes at Miller’s, less so for the court scenes. There were a number of beautiful images, mostly provided by Mark McCullough’s striking lighting. There were some odd images as well, as when the Duchess arrived riding on a large statue of a horse. Michael Yeargan’s set worked well except for the intrusive crane that carried paintings depicting the background of each scene. Dunya Ramicova’s costumes were appropriate and effective.

Francesca Zambello’s direction told the story quite well, but was plagued by singers upstaging themselves at odd angles. And in the last scene, she has the poisoned Rodolfo lumbering about, completely oblivious to Luisa begging him to take her hand.

The Lyric Opera Chorus sang wonderfully throughout, though they were often blocked into distracting groups in the background while the principals sang downstage of them. Still, Zambello kept the story moving well toward its shattering ending and created a very moving tableau as the final curtain fell.

I am hoping Lyric will bring Luisa Miller into its standard repertory so it won’t wait in the wings for another 37 years! It’s rousing, blood-and-thunder Verdi and deserves to be heard more often.