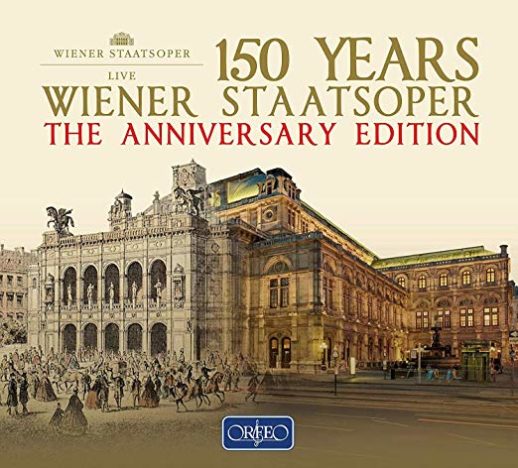 Although some of these operas can be sourced from pirate companies, Orfeo’s excellent remastering and pristine sound broadens the spatial dimension and the aural experience, even from those broadcasts that originate from the last decade. From 1988, one hears Vienna’s then music director Claudio Abbado present his beloved Rossinian rarity, Il Viaggio a Reims, to the Viennese public.

Il Viaggio is a delightful curio of an opera, a highly refined composition with a plot that is more gala with plotlike interludes than a true dramma giocoso, demanding spectacular vocals from 14 distinguished soloists. Unlike the composer’s more formally structured comic operas, it is an effervescent prosecco (or a calorically decadent dish a la Tournedos Rossini) that strikes me more as Rossini’s way of celebrating music and indulging listeners with beautiful, inventive and dazzling arias and ensembles (e.g. the great sextet).

Abbado’s Il Viaggio a Reims is already available on two exceptional recordings, one from the Pesaro Festival (Deutsche Grammophon) and the other from the Berlin Philharmonie (Sony). Both recordings are stunningly cast, and are played with great aplomb and idiomatic mastery by Abbado and his orchestras.

This Vienna performance is equally alert in instrumental execution, with the orchestral playing tinted by the Viennese ensemble’s more unique and individual colorations. The cast is largely copied over from the Pesaro recording on DG, with the most distinguished difference being Monserrat Caballé’s Madama Cortese in the Vienna performance.

Seeing as all three performances are so passionate, beautiful, and precise, and since Abbado essentially represented this work’s greatest champion, I feel that there really isn’t much room for comparison between the three recordings.

Cecilia Gasdia, Lucia Valentini-Terrani, Ruggiero Raimondo, Lelia Cuberli, Sam Ramey and Enzo Dara are all spectacular, and if Caballê’s voice has lost some luster to age, she remains an endearing presence in this opera.

Abbado was one of the most important directors of the Wiener Staatsoper. During his tenure, he led several important production including Lohengrin, Wozzeck, Pelléas et Mélisande, Elektra, Khovanshchina, and Boccanegra. I wish that Orfeo had included another one of the broadcasts in this box, as Abbado when captured live can summon so much more excitement and anima in his conducting.

One performance that comes to mind is a spectacular Simon Boccanegra from 1984 (the Strehler production having been imported from Milan), with an exciting cast that included Renato Bruson, Katia Ricciarelli, Veriano Luccheti, and Ruggiero Raimondi. If possible, this Boccanegra, previously on RCA but now out of print, is so much more electrifying than his gold standard studio recording on Deutsche Grammophon.

After Abbado’s Rossini, the rest of the sets are plucked from some of the Staatsoper’s great performance of the 2010s. The first two operas are from 2013 and showcase signature roles from two of our time’s great sopranos: Nina Stemme as Isolde in Wagner’s Tristan and Anna Netrebko as Tatiana in Tchaikovsky’s Eugene Onegin.

The Tristan und Isolde in this box was recorded during the premiere of David McVicar’s new production, conducted in this run by Franz Welser-Möst. In 2013, Stemme’s Isolde was captured in excellent voice and secure form, and her timbre at the time had not yet evolved into a significantly more dramatic sounding instrument that made it more difficult to translate to record.

Stemme’s Isolde in this performance is fiery, textually specific, and vocally vibrant. Her narratives and soliloquys in the first act are delivered with so much greater power and immediacy than her well known recording with Pappano, and her Liebestod that finishes the opera is sublime.

Seiffert, though dry of voice, is a potent Tristan who managed to imbue Tristan’s manic and delirious phrases in act 3 with a full spectrum of colors and anguished tones without descending into vulgarity. If his is not the most luxurious voice in the part, he deploys his sound with so much artistry and intelligence that his emerges as an entirely credible Tristan.

The supporting cast ranges from average to very fine, with Stephen Milling rendering the finest Marke since Renè Pape to partner with Stemme on a recorded medium. Janina Baechle is a middling, earthen Brangäne without the lilting, floating qualities needed to make her important scene shine, while Jochen Schmeckenbecher is a characterful if not very distinguished Kurwenal.

Welser-Möst aims for a passionate, driven Tristan. While he largely succeeds (only overpowering his ensemble in a handful of moments), one should really hear his meditative Tristan from Cleveland with Stemme, taped during the spring of 2018, to hear how much more deeply he understands this great score.

Still, this performance marks one of the finest live recordings of Wagner captured in the Staatsoper, with the only other contender after Böhm’s exciting 1967 performance (on Sony’s Birgit Nilsson live opera compilation) being Semyon Bychkov’s 2000 performance with Waltraud Meier and Gösta Winbergh.

The 2013 Eugene Onegin in this box is very special as it not only features Netrebko’s first performances of Tatiana anywhere, but unites her with Dmitri Hvorostovsky’s complex and seasoned Onegin.

If one had to compare Hvorostovsky’s many incarnations of Onegin in the discography, there are few productions that better capture the baritone in an ideal balance between vocal luster and theatrical complexity than the Robert Carsen production from the Met.

But Netrebko is a spectacular Tatiana, and draws out Hvorostovsky’s best insights when both characters are onstage. Additionally, her voice in 2013 still had that glittering, jewel like lyric allure that had become slightly muted by the time she revisited the role at the Met four years later.

Netrebko’s Vienna Tatiana is clearly her show, and her performance of the character’s letter scene is stunning for how she calibrates the emotional build-up while pouring out streams of gorgeous tone. Based on the audio alone, I found that Netrebko’s final scene was marked with greater nuance in the 2017 performances with Peter Mattei at the Met.

But she is a fantastic partner for Hvorostovsky’s Onegin, and both artists build off each other’s energy to make this a most memorable performance of Tchaikovsky’s opera.

A few minor letdowns in this performance: I wasn’t taken by the Lensky of Dmitry Korchak, and Andris Nelsons seemed a bit too fussy with the score to let the autumnal beauty of Onegin shine naturally. But, this recording is commendable for the rare opportunity to hear Netrebko and Hvorostovsky partnered in an opera for which they are so ideally suited.

The last two operas, an Ariadne auf Naxos conducted by Christian Thielemann in 2014 and an Un Ballo in Maschera with Jesús López Cobos in 2016, act as something of a memorial to three great artists who were beloved in Vienna, and passed away after these performances were recorded.

The Ariadne with Thielemann starred the spectacular Bacchus of Johan Botha, and the Ballo featured the musicianship of the late López Cobos and Hvorostovsky.

Thielemann’s 2014 Ariadne is one of the primary reasons to acquire this box set. Unless Orfeo releases the CDs of this performance separately (Arthaus is releasing the DVDs), there is no other medium where one can simultaneously experience the gossamer, silvery Ariadne of Soile Isokoski, the unimaginably beautiful and secure Bacchus of Johan Botha, and Thielemann’s intimate and richly detailed vision of Strauss’ score.

Botha’s Bacchus is a miracle–his beautiful and clarion heldentenor voice is paired with a flexibility, verbal clarity, musicality and lyricism that is rarely found in a single artist. One has to listen to his music with Isokoski’s Ariadne in the final scene to hear just how beautifully this music can be rendered.

Another standout in the cast is Sophie Koch, who imparted verbal detail and musicality while starring as the Composer in the Prologue. Given the ensemble heavy writing of Ariadne, this recording also shows off the talents of Vienna’s current company roster, with distinguished performances coming from Daniela Fally (Zerbinetta), Olga Bezsmertna (Echo), Norbert Ernst (Tanzmeister), Jongmin Park (Truffaldin), and Benjamin Bruns (Brighella).

Ultimately, this is Botha, Isokoski, and Thielemann’s show, and all three artists capably elevate this performance to legendary recording status.

The last opera in the box is an exciting Un Ballo in Maschera conducted by Jesús López Cobos, and is notable for the luxurious singing of Piotr Beczala and Krassimira Stoyanova. Beczala’s Riccardo/Gustavo is a vocal marvel, his honeyed vocalism and elegant phrasing reminding me of the great Verdian heroes of Jussi Björling and Giuseppe di Stefano.

He is also an utterly touching and sympathetic artist, and deploys the words of Verdi’s libretto with such grace and intelligence that his performances of roles in this repertory immediately become definitive. Stoyanova’s luscious and floating tone is welcome in the part of Amelia, and in Vienna’s friendly acoustic has no trouble balancing the character’s dramatic outbursts with the more introspective moments.

Hvorostovsky’s final performances at the Vienna State Opera were all in Verdi baritone parts. In 2016, Hvorostovsky sang Renato, Simon Boccanegra, and Giorgio Germont in that order, the run of Traviata sung roughly a year before his life was tragically cut short. If Hvorostovsky never possessed a voice with the ideal depth and resonances to fully convince in Verdi, this artist made the most out of his instrument and inflected the text intelligently to create a compelling portrayal.

If Dmitri’s voice in 2016 could not consistently support the demands of an aria like “Eri tu che macchiavi quell’anima,” he could still command the stage with some glimmer of vocal presence. Perhaps this Ballo is not the performance to remember this singer by, but even in those last days, the shards of his artistry were still there.

Of the nine sets in this box, the performances I regard as most consistently satisfying and revelatory are Thielemann’s Ariadne auf Naxos, Abbado’s Il Viaggio a Reims, Böhm’s Elektra and Welser-Möst’s Tristan und Isolde.

While certain performances have previously been made available individually, the presence of the newer gems broadcast from the 2010s make this handsomely produced set a welcome addition to any collector’s library.

The remarkably stellar level of casting, the technical finesse and lustrous Klang of the orchestra, and the idiomatic flexibility and artistry of those involved in these recordings are a testament to the Vienna State Opera’s continued tradition of excellence in an art form beloved and dear to this most musical of cities.