Three sisters who are not sisters

Dell’ Arte Opera Ensemble's “Scenes from the Tower” evening is devoted to three operas composed by women, and the metaphorical tower is women’s sequestration from the opera stage. 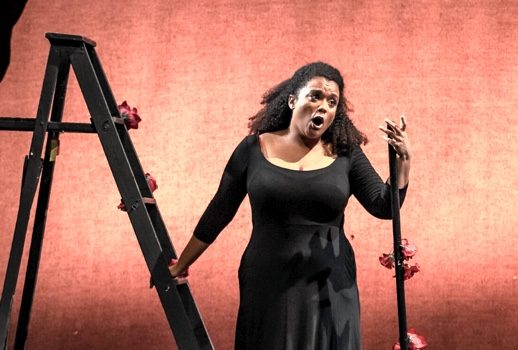 Dell’ Arte Opera Ensemble calls this summer’s final offering “Scenes from the Tower,” although the only actual tower on view appears in Act I of another of its presentations, Princess Maleine. The “Scenes from the Tower” evening is devoted to three operas composed by women, and the metaphorical tower is women’s sequestration from the opera stage.

The “Scenes” include a complete performance of Cendrillon, an opera by the great singing actress and queen of Belle Epoque Paris, Pauline Viardot-Garcia. She composed a bit on the side, and Cendrillon originated in her celebrated salon.

It’s a pretty little score, tuneful and merry, neither as deep nor as original nor as much fun as Rossini’s or Isouard’s, and without the pretensions that Massenet permits to his Cruel Stepmama. The accompaniment is piano—the work has never been orchestrated—you couldn’t fit an orchestra and an audience into a normal mansion drawing room, now, could you?—and the dialogue between numbers implies this was never a work intended to be taken tooseriously.

Theater La Mama is a compromise between a real opera theater and a salon. The décor may be shabby (and the surtitles too far above the action for easy reading), but the familiar story was clear and several very pretty voices made the proper effect.

Lauren Hrubny did the stage direction, which expanded upon a static original to create much organized fun. I loved the choreography in the Ball scene, in which the stepsisters manhandled the supposed prince through various pushy pas de deux, and then two gentlemen, stepfather and suitor, seized each other for a lurid promenade.

If the acting was good and the special effects witty (the grand piano became the coach, with circling wheels), the voices were variable.

MaKayla McDonald sang the title role, not nearly so important in this work as in Rossini’s or Rodgers & Hammerstein’s. It’s as if Viardot said, “You already know who she is. Let’s cut to the fun stuff.” I’d admired McDonald’s mezzo as the unloved fiancée in Princess Maleineand was pleased to admire it again in Cendrillon: a wonderful font of color of satisfying size. 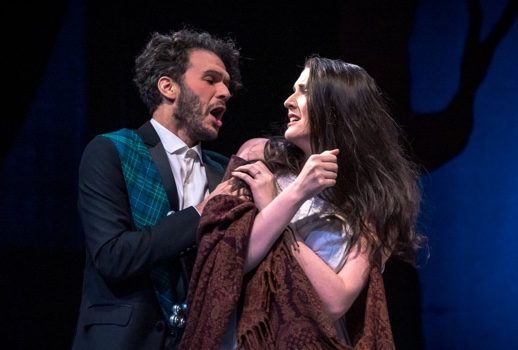 My only problem with McDonald’s firm, enjoyable sound is a beat that appears when she puts on the pressure. She is too young for such a flaw.

The stepsisters (Kristina Malinauskaite and Jesssica Harika) got to dance and mug more than sing, but the Fairy Godmother (Heather Bobeck) more than held her own. She has a sweet, well-schooled soprano that sounds neither thin nor canary up top: A beautiful and individual quality, with choice ornaments and even production.

Viardot gives her a couple of opportunities to shine, and shine she did: a voice I hope to hear again. Viardot, indeed, gives even the page-turner an aria, or perhaps the director inserted one of the diva’s mazurka chansons.

Baritone Cory Gross, a mordant shepherd in La liberazione di Ruggiero,made little impression as Prince Charming—is there any version of this story where the prince is a good part? Rossini’s comes closest, and they have to encore the aria to make him a proper leading man.

The humor was left to the stepdaddy, Baron de Pictordu, and the prince-pretender, who is really Count Barigoule, a servant in disguise. (Don’t worry your head about this; Cendrillon falls in love with the correct Prince.)

It turns out both these snobby gentlemen, Baron and Count, are social climbers who used to work in the same grocery story, but a great deal of high society chit-chat gets sung before the great recognition scene. 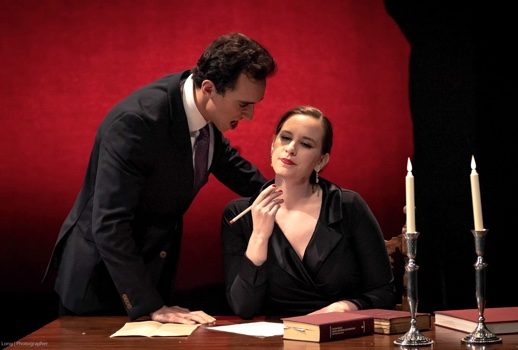 The Baron was Brian Alvarado, the quintessential self-adoring snob, with a highly attractive legato. Tyler Dobies, the Count disguised as the Prince, was if anything even more self-amorous, but I found his tenor a bit thin and stretchy. On the dance floor, guys and gals were all hilarious and kept you guessing who would lead.

The score offers many opportunities for character display in the confines of a refined salon. La Mama is not a refined salon, however, and the performers let their madcap instincts fly. It was the proper choice.

The second half of the evening consisted of scenes from two operas I did not know. Thea Musgrave, who turned ninety last year,is one of the best-known living composers of opera. New York City Opera has staged two or three of them, including Mary Queen of Scots, and Utopia Opera revived her Harriet Tubman last season.

A piano does not really provide the flavor of such a work asMary, and the rape scene from Act III was probably included in the program for its dramatic clash and dash—there is nothing like being discovered in bed with your lover by your treacherous brother to bring on operatic histrionics, unless it is another guy bursting in with the news that your decadent husband has just been blown up.

That was Mary’s situation here. Swords were out and blood was (literally) in the air, if not in the music. The music is anti-melodious, the vocal lines lively but unattractive, the action busy but incredible. No one sounded especially good and I didn’t feel sympathetic to anybody but Mary’s baby (who grew up to be James I).

Happily, though, the scene from Marywas the program’s finale, so you can skip it. You should not leave at the intermission however, because you’ll miss an intervening item on the agenda, scenes from Act I of Mrs. President, Victoria Bond’s opera about her namesake, Victoria Woodhull, newspaper editor and campaigner for women’s rights (including suffrage), free love and, most notoriously, the presidency itself.

She ran on a third party ticket in 1872, though a year too young to qualify. But hey, she’d married Woodhull at 15. Check her out on Wikipedia. Quite a lady. And so, I gather, is Victoria Bond.

The first scene on this program—the opera’s third—began with an attractive concerted movement for several women, their texts separate, not interacting. They call upon men who are not there, and in time we realized the men are dead. It is a séance. Woodhull—or rather, her mother—was a Spiritualist, a movement that thrived before, during and after the Civil War.

The texture of this number and its mystery when performed out of context were most appealing. Then Victoria (Anna Woiwood) rushed in with issues of the newspaper she has founded, filled with scandalous reportage and even more scandalous editorials.

But one of her acolytes, Isabella Beecher, protests—Victoria has accused Isabella’s famous brother, the abolitionist minister Henry Ward Beecher, of adultery with several of his parishioners. (This is accurate, by the way.) Beecher bursts in and denounces Victoria, who fearlessly demands that he admit his commitment to Free Love.

Their wrathful duet did seem … provocative … and sure enough, it turned into seduction … but who was seducing whom? Their phrases began to speed up and intercept, and the two fell at last upon her writing desk, babbling phrases, entwining their sung lines with and without meaning. We were on the edge of our seats at the blackout.

Thrilling music and thrilling vocalism and a racy libretto interacted at once! (No, it’s not historically accurate. So what?) All this left me eager to hear the rest of Bond’s opera. She is a evidently a composer whose sense of theater guides the music she composes and the singing she demands of her characters. Too, she is unafraid to be melodious when it suits the action, jagged when it doesn’t. This is just the sort of instinct an opera requires.

Besides Woiwood, whose striking, honeyed soprano and forthright and sexy acting proclaimed “leading lady” throughout this vigorous performance, the scenes from Mrs. President including attractive singing from Tyler Dobies as one of Victoria’s yearning husbands or lovers (not clear which—does it matter? It didn’t to Victoria), Robin Clifford as one of Beecher’s unrepentant victims, Addie Rose Forstman as Isabella and Geddy Warner as the Reverend.

Warner’s tenor struck me as a little shrill for the greatorator, but as his confrontation with Woiwood’s Victoria built to a climax, the intensity of both singers matched and entwined, to create a most thrilling battle of wits and bodies.

Providing a healthy taste of an unknown score of this quality is just what a small company like Dell’ Arte ought to be doing.