Whitney George’s music falls pleasingly upon the ear and is wittily scored for a small ensemble conducted by herself. 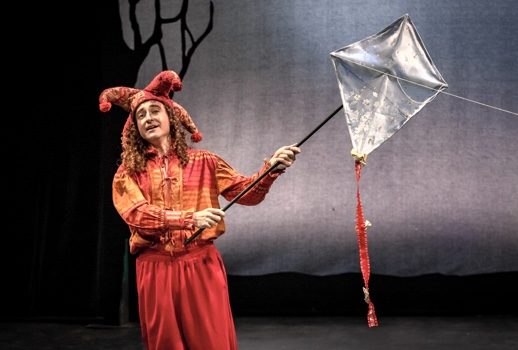 “If you abstain from tennis and read Maeterlinck in a small country village, you are of necessity intellectual,” Saki pointed out back in 1904. He did not think highly of either diversion.

Maeterlinck, the Belgian symbolist poet-playwright (Pelléas et Mélisande, Ariane et Barbe-Bleu, L’Oiseau Bleu, Monna Vanna—each of which became an opera), was even more bewildering than usual when he wrote his first play, La Princesse Maleine, yet poor Lili Boulanger attempted an opera of it that got lost when she perished in the postwar influenza of 1918.

This fact has inspired Dell’ Arte Opera Ensemble, as part of its ambitious summer season of operas by woman composers, to commission a new one, Princess Maleine, which had its premiere at Theater La Mama last Friday. I caught the second performance Sunday. There will be others on Tuesday, Thursday and Saturday. The assembled musicians are worth hearing.

Whitney George’s music falls pleasingly upon the ear and is wittily scored for a small ensemble conducted by herself. Best of all, George composes gratefully for the human voice, and the cast is full of remarkable young singers to exploit this. There is much sheer physical pleasure to be had here.

But—that goldarned libretto—well, I don’t want to teach George her business—oh hell, someone has to. The libretto, in English couplets, is by Brittany Goodwin. It is full of flowery phrases and symbolic characters and fraught but indistinct relationships, and don’t get me started about the foreign policy of imaginary kingdoms.

In a libretto, relationships and motivations should be clear and significant, so that if an oddness crops up—somebody’s long-lost somebody else, say—it will have musical significance.

Perhaps the opera would not seem so windy as it does—17 named characters, plus a bunch of nuns and the puppeteer operating an adorable dog who symbolizes something or other—if it were not all of it sung in stately arioso. I kept waiting for someone to get excited—battles are fought! Princesses are jilted! Armies are slaughtered! Dogs are found! Vary the pace, for gosh sakes!

I waited, too, for melody. George writes a lot of melody, actually—and gives it to the orchestra. The instruments play sweetly, but there are 17 singers on that stage. Why are they declaiming in recit? Why do they do nothing but declaim, all at the same stately rate?

What we need are memorable tunes, so that individuals can explain who they are and make us care about them. There isan aria, for the title character, Maleine, and Elyse Kakacek’s sizable, unexpectedly deep and honey-colored soprano soars through it,but the evening’s just about over before she gets it.

There’s a trio early on, and there’s a faint stab at a concertato at the end of Act I, but just for a moment. The thing opera can do that poetic drama can’t do is express two—or three—or ten—emotions at once. Why don’t composers want to do that anymore? It’s not like these characters have much to say for themselves. They’re Maeterlinck. They speak in symbols. If the music is properly individual, you don’t need to understand a word.

A prince and princess meet late at night in a park, and she’s pregnant the next day—part of the activity obviously must remain off stage (unless modern stage directors get hold of it). But meanwhile, why not allow them to express their feelings in song? Jeremy Brauner’s ringing, lyric tenor would blend sublimely with Kakacek’s soprano if this were a typical opera. But here they just declaim, and run off stage. Stick around, guys! Sing some Verdi!

Omit the princeling and you can ditch both prologue and epilogue. You’ve gained half an hour! You can use the time for a genuine concertato or a trio or two. Who is this kid anyway? He’s sad because he lost his mama, though if he’s been paying attention to this opera, he’d know mamas are a doubtful blessing at best. Is that the opera’s message?

The Fool is sung by Jeffrey Mandelbaum—a good choice in this golden age of countertenors. He has sung both ancient and recent operas, his plummy alto fills the room and he makes his Maeterlinckian proverbs misty and spooky and sexless. The prince is Megan Vanacore, who looks bewildered. So are we, so we feel for her.

Here’s the plot, prologue aside: Princess Maleine is in love with Prince Hjalmar, and he with her. But her father wants her to marry someone else. This leads to war and the devastation of her country, which Maleine observes from a tower in which her father has imprisoned her.

She escapes from the tower, finds her country in ruins, and shows up in Hjalmar’s country, where he is being forced to marry someone else. Of course, he ditches his fiancée the moment he lays eyes on Maleine. But his wicked stepmother, Queen Anne—at least I think she’s his stepmother—poisons the pregnant Maleine. Or strangles her. Or both. So Hjalmar stabs Queen Anne.

You see what I mean about the jester and the princeling—they’re not important. Actually, none of these people are important. They’re symbolic.

You might begin the opera with Maleine in the tower, imprisoned by her father (for seven years, per the Brothers Grimm), separated from the man she loves, as in the brief, clear, three-character fairy tale on which Maeterlinck based it. You could handle the backstory in one reflective monologue and you’ve already cut an hour of this opera down to ten minutes and omitted half a dozen pointless characters.

We can fill up the empty spaces with, you know, music. A drinking song in the inn, say. (Yes, there’s an inn, but no drinking song.) A court ballet with a minstrel to sing at it. (There’s a ballet but no minstrel.) We need a love duet.

We don’t need a friendly dog who doesn’t sing. Maeterlinck invented the dog, but that’s no reason to keep him. It’s a series of wasted chances with a lot of good singers. I kept hoping one of them would burst into Donizetti or Gounod or Andrew Lloyd Webber to rescue the situation.

As directed by Bea Goodwin, the symbolic action was obscure. I mean, is King Hjalmar, sung by Eric Lindsay, a fine woolly bass, married to Queen Anne? And why does he sit there watching while the Queen poisons pregnant Maleine? But if he’s not the father of Princess Ursula, Queen Anne’s daughter, whom she hopes to marry to the king’s son, Prince Hjalmar, then who is? Ursula is sung by MaKayla McDonald, another full-bodied soprano with beautiful, ringing notes and not nearly enough to do.

And why does Queen Anne attempt to seduce her son-in-law prince herself, and poison his true love? Look—we don’t need that incest scene. It’s gratuitous. We already hate the Queen, sung by Liz Bouk, a fine actor with no particular singing voice, thin and ill-supported. George has written a brief, lustful tango for him, but he doesn’t sing it well and, worse, it wastes time. Verdi’s first law of opera composition: Don’t waste time!

Among the other roles, all of them strongly cast, I was especially happy with Nicholle Bittlingmeyer, a winsome light mezzo as Maleine’s resourceful lady in waiting, and a dark-toned tenor named Marques Hollie, who plays Queen Anne’s toxic Doctor. He has a long, glum solo explaining that he devised poison at the Queen’s command, without explaining why he didn’t substitute something milder, as the similar character does in Shakespeare’s Cymbeline.

It seems to me that George has every skill necessary for an opera composer except a sense of the dramatic, and her librettist, hamstrung by Maeterlinck (what a great title that would be!), has not helped her. There’s good music here (mostly for orchestra) and if they revise it, they should begin by tossing the libretto and half a dozen of the characters. Seriously.