The Isle is full of noises

Dell’ Arte Opera Ensemble theme this summer is women composers, which is timely, and the more to be applauded as likely to turn up unusual works. 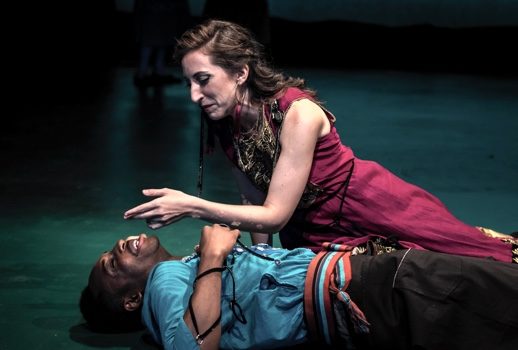 Dell’ Arte Opera Ensemble tends to choose a “theme” for each year’s offerings. This summer the theme is women composers, which is timely, and the more to be applauded as likely to turn up unusual works.

The company will present a world premiere, Whitney George’s Princess Maleine, on Friday, and an afternoon of art songs by the Boulanger sisters on Saturday. Meanwhile such once-famous but now little-known “singer-songwriters” as Francesca Cacciniand Pauline Viardot will have their operas revived.

Caccini’s La liberazione di Ruggiero dall’ isola d’Alcina, a work of 1625 that is often regarded as the first opera composed by a woman—but how many men had composed any by that year?— opened the season at the Ellen Stewart Theater on East Fourth Street on  Saturday night. The work had its New York premiere just last fall, at the Morgan Library, under the auspices of the Boston Early Music Festival, and it was fascinating to compare these two fine presentations.

Caccini was, you might say, born into opera—her father, the composer, tenor and essayist Giulio Caccini, was one of the inventors of the form. Francesca performed and composed madrigals and church music at the Medici court in Florence, and she moved into larger forms because, well, she could, and there was beginning to be a demand for them.

She had already, in 1622, produced a “sacred drama” on the martyrdom of St. Agatha, and like every early opera composer she had no trouble moving from sacred emotions to secular ones. All she needed was an occasion—the secular opera theaters of Venice were not opened until the next decade, and Caccini was at the mercy of the Medici.

They were welcoming a Polish prince who, they hoped, would marry one of the dynasty’s daughters. (He didn’t.) In the opera’s brief prologue, the Vistula River appears to salute him, aided by Neptune.

Ruggiero/Alcina has the same plot we know from twenty—maybe fifty—other baroque operas, drawn from Ariosto’s epic, Orlando Furioso. The noble knight Ruggiero has been captivated by the amorous sorceress, Alcina, who has sprinkled her frolicsome desert island in the Mediterranean (Ibiza, I suspect) with trees, flowers and zoo animals, all of them transformed from her ex-lovers. (Circe settled for pigs, but magical technology had improved in two thousand years.)

A good sorceress, Melissa, liberates Ruggiero and the others, and the set-up permits many a jolly shepherd and siren to provide advice about courtly love in good madrigal style.

The show is brief (one act, about 80 minutes), the music very similar to the Monteverdi of La favola d’Orfeo, and lutenist Charles Weaver leads six other musicians primed to the proper style.

The scenic design by Joo Hyun Kim consists of attractive streams of colorful willow-like vines strung artfully around the playing area, Claire Townsend’s costumes are colorful if uncertain in style, and stage director Sarah Young keeps the singers from bumping into each other between dance steps.

I rather missed the intricate movement and the interweaving of costumed singers with uncostumed instrumentalists which was an entertaining feature of the BEMF presentation, but Dell’ Arte makes much of what they have.

The opera is double-cast. The singers on opening night were none of them known to me; they ran the gamut from decent to excellent. But the most striking thing about them—and I can only speak from the evidence of my ears—was that their training appeared to have been primarily in the general operatic repertory, the “classical” style from Mozart to Puccini.

They did not have that pointillist precision of focus, that delicacy of baroque ornament that identifies the specialist in this style. As a result, Caccini’s charming score resembled those postwar recordings of Monteverdi and Handel: wonderful music and fine singing with a vaguely Victorian air.

To those whose ears are sensitive to the modern Early Music manner, this may seem a trifle vulgar, as do those recordings of Sutherland, Price, Wunderlich and Fischer-Dieskau in Handel operas. Beautiful singing, certainly, but stylistically curious.

The most striking of the singers was Markel Reed, a splendid, forthright bass-baritone (he sings Rossini’s Figaro and Mozart’s Count), whose clear, eloquent voice made Ruggiero a brash warrior enough but flavored with an amorous bewilderment. I don’t know if this was the sort of voice Caccini composed for, but I would be eager to hear him again in another repertory.

In contrast, Heather Jones, as Alcina, has an attractive, well-schooled instrument that lacked the fire and brilliancy to convince us of her magical flair. Her rival witch, Ilanna Starr, Melissa, who has sung Monteverdi’s Nerone as well as Mozart, performed with assurance in a more varied, dramatically incisive manner.

Alessandra Altieri portrayed the Vistula with proper, inviting charm; she will alternate that role with a Siren, both parts shared with Robin Clifford, whose attractive soprano bestowed experienced amorous advice with a grave, swelling soprano, though her costume seemed a bit drab for the role.

The orotund voice and figure of Conor Lidell suited expansive Nettuno, and Cory Gross, who forthrightly calls himself a character tenor,performed a philosophic shepherd with distinction.