Everett Quinton’s Galas is a star at the end of her tether, and she goes nova with the best.

Charles’s face, framed in Camille’s sausage curls, Traviata-gowned, chest hair peeping over his low décolletage, appeared just once on the front page of the New York Times—heading his obit in 1987. The epidemic was at its early peak and Charles symbolized, as well as anyone, the assault upon the young, the gay, the inimitably talented, the impossibly promising.

His genius was just emerging from the fringes of Off Broadway to explode upon the world. He was set to direct his first play for Shakespeare in the Park, Titus Andronicus. He was about to ride to the rescue of grand opera in Santa Fe. He had just appeared, to general acclaim, in his first commercial Hollywood film, The Big Easy. All sorts of projects were under discussion.

What we have left are the texts and a certain tradition of anything-goes mayhem, inventiveness and lewd challenge from his erstwhile troupe, the Ridiculous Theatrical Company. The company, too, no longer exists. But a few alumni carry on, and a few of the plays (most notably Camille and The Mystery of Irma Vep) have proved widely stageworthy. Recent revivals at LaMama suggest that more of them merit notice.

There is, for instance, Galas: A Modern Tragedy (1983), in which he played a Greek-American opera diva, Maria Magdalena Galas. “I am a musician. I do not like music. I am music,” she declaims to an Italian brick manufacturer who soon becomes her husband and business manager.

She loses a colossal amount of weight. (Did she swallow a tape worm?) Despite her nearsightedness, she studies the contracts offered by the unwilling management of La Scala. She debates, caustically, the meaning of bel canto with the (sadly Wagnerian) pope. She creates scandal, then glides off on the yacht of a shipping magnate.

She is a votaress who serves only Art; she has enemies but no rivals—for no one can do what she does. And yet everyone lets her down or turns against her or leaves her. She is alone. “I really wanted to be a dentist,” is her despairing threnody.

Galas is not about opera, or about music, or about art, or about life. The trials of celebrity? Just a little. Galas is about the Legend of Maria Callas and the Myth of Opera: The song that is more than life. 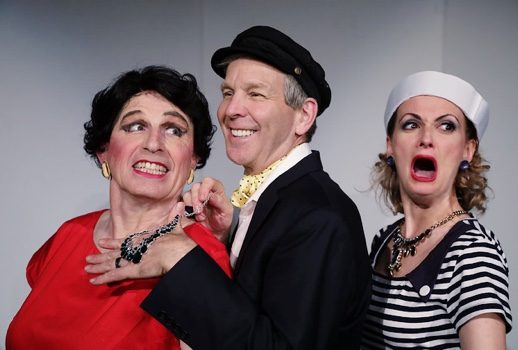 Here, on stage, we resemble idle standees in our quest to comprehend the gossipmonger’s tidbits, the tales that everyone who knows nothing about opera knows about this opera singer. When three characters (Magda, her husband and her lover) break into simultaneous outcries, we understand that only operatic forms like the concertato can express the dilemma of their souls.

Anyway, the revival (is it the very first?) is running through June 28 at the Theatre at St. John’s, just off Sheridan Square, in a bare-ish production directed by (and starring) Everett Quinton.

Quinton was Charles’s life-partner and theatrical disciple. He played Galas’s housekeeper and coach, Bruna Lina Rasta, in the original production. Now he plays Galas herself, as he has taken on such other Ludlam roles as Bluebeard and Camille. You couldn’t take Everett for Charles, but you could easily mistake his Galas for Gloria Swanson’s Norma Desmond.

Everett’s Galas is a star at the end of her tether, and she goes nova with the best. And when Everett switches to bathing costume—please note—his legs are better than Callas’s were.

As with all Ludlam’s vehicles (except Irma Vep: eight roles, two actors), Galas has many characters, and unless the performers are quite as zany—each in an individual way—the shows do not flourish. This is a tradition and clearly Quinton knows it well.

Take, for example, Jenne Vath as Bruna Lina Rasta. No, on second thought, you can’t take her—she’s mine. With her be-coaled eyes and gap teeth, her flail whipped out (sic) on the appearance of the pope so that she can flog herself into his presence, her dark, sibylline utterance, her willingness to serve as dogwalker, doorkeeper, even coatrack whenever her mistress requires and at full melodramatic tilt, Vath is Ridiculous in the grand manner. Cast her as Mamma Lucia and she’ll poison Lola.

Shane Baker is the prissy pope whose ring lights up when properly kissed. (Galas, being Greek Orthodox, could care less.) Géraldine Dulex is winsome as the gal pal you don’t want to leave alone with your man or your emeralds. Chris Johnson, as the reluctant representative of La Scala, sweats loudly—and voluptuously—and in alt! 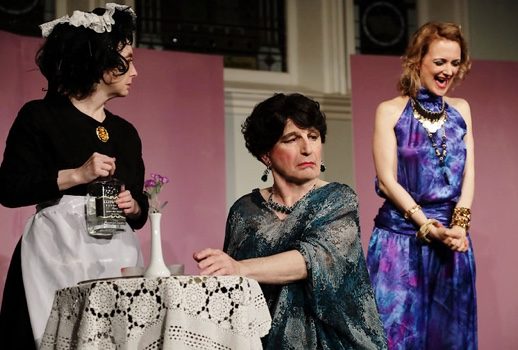 Sturdy Mark Erson and vinegar-faced Maude Lardner Burke—is she intended to resemble the Willendorf Venus?—play Socrates and Athena Odysseus on the most sybaritic yacht in the Aegean.

The one role I thought underdone was, alas, an important one: Mercanteggini, Galas’s marito. Beth Dodye Bass has the (short, pudgy) stature for the role, and the proper pomposity, but her lines were often inaudible or unclear (in contrast to every other actor in the show), and without setups some of Galas’s lines fall flat, no matter how winsome Quinton’s definitive and operatic dicta.

On his own, swallowing a sneer, twirling a phone cord like a jump rope, Quinton is Galas. But we’d like to get the verbal jokes, too.

In the old Ridiculous days, sets and costumes never looked inadvertently tacky, but clearly many compromises were necessary for this nonetheless welcome revival. Ramona Ponce’s costumes revel in Magda’s transformation from wallflower to glam.

Jim Boutin’s sets are mostly flats that unfold into splendid backdrops and never get in anyone’s way. Robert Neapolitan is credited with lighting and sound design, so I presume he copped Sixtus VII’s light-up ring. I’m sure Pope Francis will desire a copy for the next baciamano.

Various arias are played between scenes of the play, few of them by Callas. Sadly, Act II, which should begin (the script specifies) with the nautical opening of Act II of La Gioconda (the scene, in Galas, is the Odysseus yacht), does not do so—perhaps no one remembers how bracing and sea-air-fresh the music makes old opera-goers feel.

The concluding “Vissi d’arte” caused a flurry among aficionados present: It is the superb recording by Lina Bruna Rasa, a perfect soundtrack for divine tragedy.

Go to Galas. You will laugh. You will weep. “I need good news!” Galas despairs, to the deaf ears of heaven, whereupon Bruna rushes in to cry, “Madame! Your dog is dead.”