In a deep vaulted cell

We convoke for Dido and Aeneas in an arched tunnel a city block long, lit by candles in the many recesses. 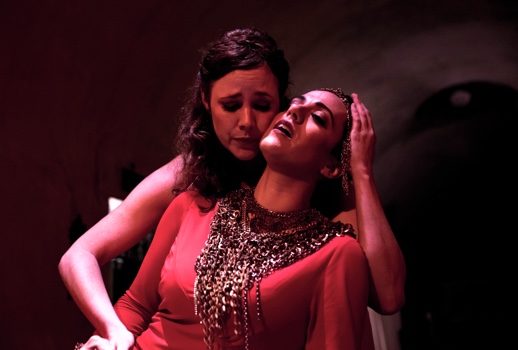 Imagine an opera of somewhat morbid theme presented in the recesses of a catacomb, its echoing recesses lined with names of the elite departed. That’s not the setting of the opera, mind you; it’s just the site of the performance.

Sounds like something from an Anne Rice novel, doesn’t it? Or Poe? That sort of blood-curdling elegance, appealing to the jaded New York palate. Throw in (as they do) a shot or two of high-quality Scotch.

We convoke in an arched tunnel a city block long, lit by candles in the many recesses. There is a small stage and (behind it) a smaller area for an orchestra of six. The actors’ gestures are simplified, the voices grandly projected—and to prepare us for the entertainment, there’s a bit of a traipse through a twilit cemetery, hills and dales, obelisks and colonnades.

And to conclude, the same walk back (a rare torch to light the way) through the dark and brooding landscape. There’s a coach for the footsore, but I preferred to live out my Caspar David Friedrich fantasies.

Death of Classical provides an operatic experience of romantic design—romantic in the literary and artistic sense. The place of performance is a catacomb in Green-Wood Cemetery, Brooklyn’s landmark shrine for the expired upper crust. The producers know how to gild the overgrown ivy circling the antique yew tree and enhance the musical experience of a not too summery night, down by the dark tarn of Auber, in the misty mid-region of Weir.

The opera last night (to be repeated tonight, Friday and Saturday), is Purcell’s Dido and Aeneas.

The company’s mission statement says something about neglected repertory, yet Dido is anything but that: everyone has produced it and everyone has seen it. Dido,with its abrupt shifts from grandiose speech to slang, its varieties of melody and style, its Shakespearean mixture of genuine tragedy and marvelous absurdity, wins over every audience.

You can cast it with great divas or Broadway stars, dance it or televise it, do it regie or with every period detail in place, and the opera always proves stronger than the producer. Rare is the Dido or Sorceress who cannot squeeze something new from her role. They’re rich roles!

The work’s brevity gets to us: Dido’s very real, very deep feelings are not scanted. Aeneas may seem abrupt—he does his duty, whatever his private feelings, and when he tries to change his mind, offended Dido proves the stronger actor. 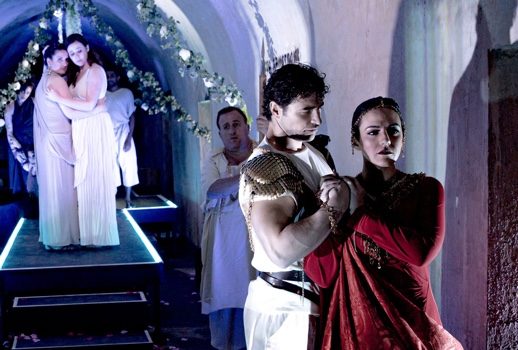 “Maybe some of the opera is lost,” said the guy behind me, of Aeneas. “But what else is there for him to do?” I asked. “Following orders (from the Gods) at the expense of personal feeling is his function. The Romans admired that.”

The 10 singers in this production double as chorus, and their harmonies fill and thrill the long, arched catacomb corridor. They make a wonderful sound there, which makes one regret that a couple of choruses and repeats were omitted. On the other hand, the echo effects of “In a Deep Vaulted Cell” were particularly well favored.

In place of the omitted chorales and in order to fill holes in the plot, the company (probably director Alek Shrader) has inserted scenes from Christopher Marlowe’s Dido, Queen of Carthage.

This only complicates and clutters the simple story, actually, and furthermore makes dramatic demands that the singers cannot always fulfill. I wish someone had said, “That’s not a good idea” when it first came up. There are awkward lines spoken badly by people who would rather be singing, and should be.

I wish—we all wish—Purcell had written half a dozen more hour-long mini-tragedies as exquisite as this one. Every opera producer on earth would sell her or his shirt to present them. But he didn’t. If you do Dido, you should stick with Dido. Purcell’s, not Marlowe’s.

Start out by casting worthy singers. Death of Classical’s Dido and Aeneas sound and look their parts, she slim and handsome and stern (Dido’s beauty should be stern; she’s the kind of woman who takes being thrown over far too seriously), he muscular and filmstar-jawed and tall, both of them with voices that seem, at close quarters, almost too loud—except some of us like loud singing and are exhilarated by it.

Daniela Mack sang Dido with authority—the part must be sung with authority. Amid a crowd clothed in white, gray or black (the costumes are by Fay Eva, who revels in chainmail jewelry), Mack alone wore red, prefiguring her end and drawing attention to her imperious will through every crowd.

Her room-filling tones seemed entirely dramatic, but when she was given one of Belinda’s frillier airs (“Haste, haste to town”), she accomplished the filigree gallantly, and the suffering of her final scene was most moving. And the pile of red fabric after her suicide became the image of her pyre. 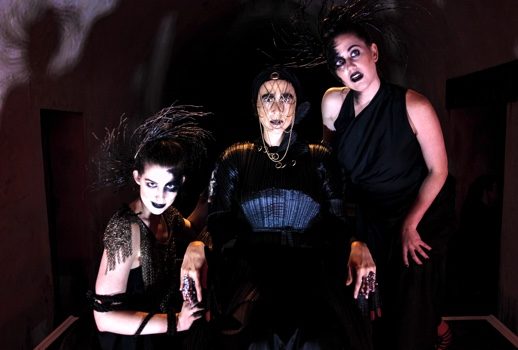 Paul La Rosa¸ as Aeneas, matched her ardent look for look and forte for forte. His voice, with intriguing colors he knows how to use for emphasis, merits a more interesting role than Aeneas, and he acted the inserted Marlowe speeches forthrightly. But there isn’t a real duet or a real aria for Aeneas in this opera, and it’s no use pretending there is. Maybe we could steal one for him from a Handel oratorio.

Vanessa Cariddi, oft admired for her character acting as well as for her sprightly mezzo, was perfectly suited to the Sorceress who destroys Dido “whom we hate/ as we do all in prosp’rous state,” but she added a touch of pathos to her curses by kissing the queen when she departed.

Her attendant witches, who conjure storms, and delight in trouble, were sung by Alyssa Martin and Erin Moll with all the wicked mirth and eldritch hand jive that could be desired, plus twiggy headdresses that would pass nicely as club wear.

Silvery soprano Molly Quinn sang and decorated Belinda’s arias so beautifully that one regretted that much of her role was given to other singers—one longs to hear that voice in Purcell or Handel.

Elliott Figg, the music director, conducts from a harpsichord at the rear of the stage where few of the performers can see him, but none of the singers ever seemed lost or even puzzled.

Though sight lines might have made some of the action difficult to see (I advise shorter visitors to head for the catacombs early), I can’t believe anyone in the chamber had a problem hearing the music, loud and clear. But again I wish more of Purcell’s rich choral background had been allowed to shine through; the entire cast were game for it.

As it was, a musically and scenically elegant entertainment.