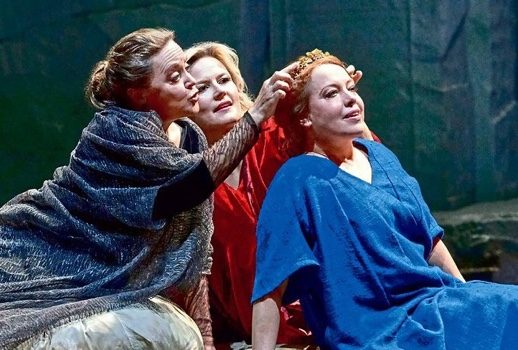 Christian Thielemann, our era’s preeminent master of the Straussian idiom, conducted the Staatsoper orchestra in a mesmerizing reading of the composer’s neo-Wagnerian fantasy. Under his brilliant direction, Strauss’ tonally polymorphic orchestration emerges with silken, chamber-like textures, with instrumental voices carefully modulated to let his singers relish in the score’s vocal lines.

For this important occasion, the Staatsoper secured the young French director Vincent Huguet to conceive a theatrical concept that reads superficially as a love letter to Strauss and Hofmannsthal’s creation. Huguet, a former apprentice to the late Patrice Chéreau, underscores the characters’ human and compassionate elements while largely adhering to the plot’s blueprint, with the only deviations from the narrative consisting of allusions to the First World War (the years during which Frau was scored by the composer) during the second act’s scene transformations and reveries.

My reservations with the optics of Huguet’s staging is that the story’s fantastical elements often appear muted. To cite some examples: the spirit realm that opens the first act is compressed into a rickety gazebo that mimics the cover of the Boosey and Hawkes vocal score. Throughout much of the opera, the libretto’s fairytale beings and acts of magic are mostly excluded from the staging or suggested through amorphous projections.

For a production that feels ostensibly traditional, Huguet’s subjugation of the mythological unfortunately creates a tepid, halfway-to-concertante concept that lands little fascinating insights in his effort to embrace the drama’s more human dimension. 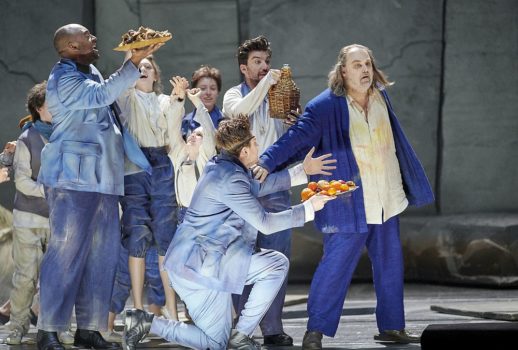 Although directorial attempts to pare down this opera’s fantasy could be engaging, such aesthetic choices ought to be met equally with other justifiable production elements (e.g. the psychosexual touches of the Robert Carsen or the haunting, nightmarish reveries of the Claus Guth).

I can sympathize with the creative team’s adherence to a more conventional staging—it can’t be easy to push the Regie envelope in Vienna for an opera intended to celebrate both the house’s 150th and the work’s 100th anniversaries. But magic is never exclusive to the most provocative Regisseurs, and for all his intentions to remain within the libretto’s boundaries, Huguet and his team at times prove incapable of conjuring the more fantastical facets of Hofmannsthal’s mythos.

Fortunately, Huguet’s thoughtful Personenregie provided his leading artists with the opportunity to flesh out compelling character readings. Nowhere is his direction more poignant than with the cast’s three incredible female leads, who were instrumental in creating a Frau Ohne Schatten of incomparable depth and dramatic power.

Herlitzius is a most riveting Amme. This erstwhile Dyer’s Wife tackles the Amme’s uncut music fearlessly, her soprano traversing Strauss’ impossible extremes of range and expression with vocal athleticism. In conjunction with her fluid body language, the soprano musically and physically embodies the character’s dark yet paradoxically loving nature.

During the earlier part of the opera, she conveys the Nurse’s malevolence so sinisterly during her manipulations of the Dyer couple. More importantly, Herlitzius clearly underscores her motherly care for the Kaiserin. After the Amme is abandoned by the Empress, her often cut meltdown scene in the third act is rendered here with bite, desperation, and dazzling precision. A truly outstanding portrayal.

Camilla Nylund’s silvery soprano might on paper appear more comfortable in the Marschallin and Arabella’s statelier vocal lines. However, Thielemann and Huguet support her in developing a deeply human and musically transcendent Kaiserin. Throughout the opera, Thielemann employed a transparent brush when accompanying Nylund, enabling her soprano to impart color and verbal detail to the vocal writing’s softer music. In this production, Huguet also crafted a stage direction that places the Kaiserin’s compassion and nobility at the heart of the opera. 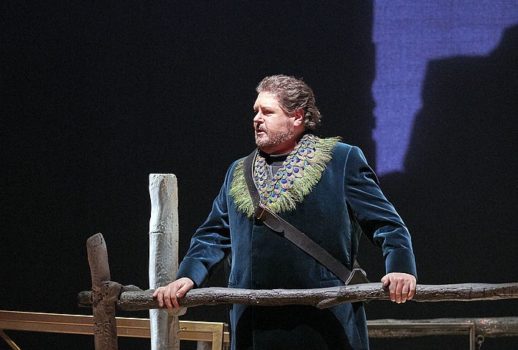 During the second act Verwandlung that precedes the Kaiser’s great solo, Nylund finds herself among a field of fallen soldiers—a thinly veiled allusion to the horrors of the Great War. Just before the Kaiser arrives, Nylund identifies a badly injured young soldier, whom she cradles in her arms while the Kaiser wrongfully contemplates her deception. Later in the act, she unleashed the full strength of her soprano during the Kaiserin’s expressions of remorse for wronging Barak and during her fiendishly difficult nightmare, capping it with a piercing D-flat.

In the third act, Thielemann and Nylund build an overwhelming reading of the Kaiserin’s final confrontation with the Amme. Thielemann’s orchestra glows when the Kaiserin abandons her divinity for the human race. When Nylund finally rejects the Amme, she devastates the listener with a soaring, intelligently paused “Du taugst nicht zu mir!” Given her character’s moving arc and her engaging musicianship, Nylund’s incredible Kaiserin is one of the select portrayals that convince me of her centrality to the drama—no easy feat in an opera dominated by strong characters.

Stemme is a phenomenal F?rberin. Her dramatic soprano’s power, warmth and feminine qualities create a much more sensual and sympathetic portrayal of this puzzling, though emotionally kinetic character. Stemme’s keen sense for textual nuance and phrasing additionally impart greater complexity to a role that is normally portrayed as a brittle termagant.

There are many moments in her pensive singing that give one pause, with the somber “Dritthalb Jahr bin ich dein Weib” being a highlight of the first act. Even during her silent scenes, the vast emotional range Stemme commands with her facial expression carried enough power to communicate the inner workings of this character (I think of the intense longing physically expressed by both Barak and his wife during the gorgeous D-major interlude).

Stemme’s performance in the second act is a marvel. The Dyer’s Wife is required to sing two vocally acrobatic scenes that test a dramatic soprano’s temperament and vocal range. The two “Es Gibt Derer” excerpts in these performances were delivered by Stemme with great aplomb, her character’s angular vocal line, declamatory passages, and leaps to B’s and B-flat’s sung fully and securely. When the character reveals her shadow-less state, her “Barak ich hab es nicht getan” soared over Strauss’ dense orchestration with overwhelming power.

The F?rberin open the opera’s third act with the elegiac “Schweigt doch ihr Stimmen,” sung by Nina with incredible pathos. She joins Barak in the glorious “Mir Anvertraut” duet and greets her freedom with a full-throated cry of jubilation. Stemme evolves the F?rberin’s character arc throughout the three acts organically. One gets a sense that her character’s uplifting transformation in the finale evolves genuinely from glimmers of a sympathetic side observed as early as the first act. It’s a remarkably well thought out portrayal that I hope will gain more in depth and theatrical insight as she brings this character to other productions.

Gould sings the Kaiser’s high lying vocal lines with a hefty and secure tone and ardent phrasing. Although the American heldentenor has been essaying the most challenging Strauss and Wagner roles for more than a decade now, the beauty with which he dispatches his repertory’s taxing music is most welcoming. 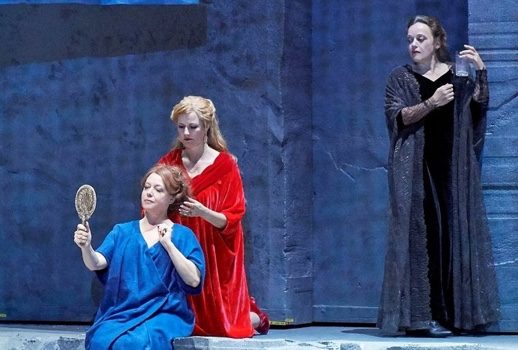 If the extremes of the voice have lost some color with age, the rest of the instrument pings with a resonance that was not nearly as apparent in his earlier Kaiser with Thielemann (Salzburg, 2011). His hair-raising second act solo was tremendously impressive, with his voice rising to the challenges of the Kaiser’s clarion dramatic outbursts admirably.

Koch’s shadowy and sizeable bass baritone has embodied the role of Barak in many important productions of this opera for over a decade now.  Koch’s Barak creates beautiful caressing sounds in the character’s more lyrical music and deploys a grainy snarl when his character turns against his wife in the second act’s great cataclysm.

If his voice at this stage is beginning to lose some of its former vibrancy and color, his remains an incredibly sympathetic and soulful portrayal—he identifies strongly with Barak’s compassionate character, and in his interactions with Nylund’s empress and Stemme’s F?rberin produces the subtle physical and musical gestures needed to inspire these characters’ transformation.

Sebastian Holecek’s bass-baritone carries much of the density and presence to render an imposing Geisterbote, although I found that his banishment scene with the Amme was slightly overpowered by Thielemann’s orchestra. Barak’s brothers, played here by Ryan Speedo Green (Einarmige), Thomas Ebenstein (Bucklige), and Samuel Hasselhorn (Ein?ugige), were a tuneful and characterful trio.

Maria Nazarova dazzled with her vibrant, bell-like soprano as the Falcon and the Guardian of the Temple. Monika Bohinec’s ringing contralto carried great presence in the house when she announced the Dyer couple’s freedom in the third act.

Thielemann and the Staatsoper orchestra (spearheaded by the top desk players of the Vienna Philharmonic) suffuse Strauss’ kaleidoscopic fantasy with a chamber-like Innigkeit. The composer’s massive orchestration here acquires an astonishingly delicate and caressing tone, with the dynamic levels pared down even during the most technically taxing passages. Thielemann gives his principal players the aural presence to blossom their solo parts, with notable mention going to Volkhard Steude (violin) and Tamás Varga (cello).

Remarkable too is the rhythmic control and flexibility of this reading—Thielemann for instance indulges in stately Romantic tempi in developing the gorgeous D major interlude of Act 1. The orchestra’s golden grandeur in the night watchman scene moved me so powerfully that I shed tears near the first act’s end.

When the Nurse experiences her meltdown in the third Act, the Staatsoper’s extraordinary string and winds sections plays this fascinating exploration on atonality with a hair-raising urgency and precision. And the level of detail that the orchestra accomplishes in the cataclysm of the second act’s finale is a feat no other conductor has equaled in the discography.

If Strauss’ Frau Ohne Schatten has a greater champion, I have yet to encounter one as miraculous as Christian Thieleman. As evidenced by this performance’s extraordinary musical attributesand the thunderous ovation that greeted the musicians afterwards, the Staatsoper really could not have assembled a more brilliant artistic ensemble to present Strauss’ great gift to Vienna during its 150th anniversary.