Waiting for the sun

The New York premiere of Kopernikus, an opera by the Canadian mystic Claude Vivier, who was murdered in Paris in 1983, three years after its completion. 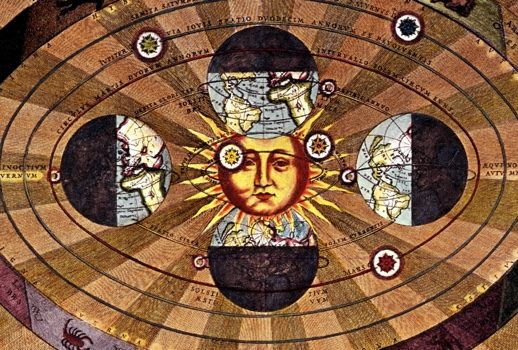 Some years ago, this writer used to attend a coven of witches devoted to Hekate, goddess of magic and crossroads. On nights of the dark of the moon, we would invoke her and the winds, sitting in pitch darkness and speaking in tongues, receiving visions in the absence of any external light.

I was strongly reminded of this experience last night while attending the New York premiere of Kopernikus, an opera by the Canadian mystic Claude Vivier, who was murdered in Paris in 1983, three years after its completion.

It is rather too melodramatic to assume Vivier anticipated his own death in subtitling this work an “opéra-rituel de mort.” Rather, I think, like many mystics, he was attempting to perceive alternative states of being, using music to lead us to such perceptions and to calm our anticipatory alarm.

I have no idea at all why he chose the Polish bishop-astronomer for the name of his opera. Perhaps Vivier was trying to see himself in orbit around a universal soul rather than egoistically central to a world that circled around him, as we are all inclined to do, artists or not.

The theories of Kopernikus put earth in its proper place in relation to a sun, whose turbulent surface, refracted through various colored lenses, was a frequent image in the videos (by Sergio Policicchio) that we were intended to watch during the performance.

Kopernikus, which will be repeated tonight, at 22 Boerum Place in Brooklyn Heights, as part of the New York Opera Fest and the MetLife Music of the Americas concert series, has neither plot nor individuated characters. It begins with a consolatory paragraph from a letter by Lewis Carroll to a bereaved friend, and the voices of the six singers thereafter sing many a curious text (some, not all, are subtitled) in many a language.

At Boerum Place, a grandiose but tattered former Elks Club cocktail lounge, the audience sits facing a blank wall. Behind us are the eight instrumentalists: oboe, violin, trumpet, trombone and three clarinets of the International Contemporary Ensemble, plus percussion, conducted by Sebastián Zubieta.

Behind them, in turn, are seven singers, four women and three men of the early-and-modern music group Meridionalis. Projections are shown on the wall we face: starscapes, the sun in turbulence, leaves, trees, clouds, a pair of hands.

The text refers to a figure named Agni (the Hindu god of fire, I note), who is departing earth or this life, perhaps from the sun. A serene calm reigns, about facing transformative journeys and visiting Merlin, Mozart, an elderly monk, the Queen of the Night, the Master of the Seas, and Tristan and Isolde on the way.

The words do not clearly relate to the music, which varies from church music harmonies to avant-garde tonalities with lyrical interludes for one instrument or another.

The light show (which had the poetic but unenlightening subtitles projected against it) rather precluded sitting back and letting one’s own imagination create images in response to the auditory serenade, but it was very well done. I was reminded of hallucinations invoked when speaking in tongues in total darkness, conjuring concrete images quite unintentionally out of the blind night.

Meridionalis specializes in two types of music: early and very recent. They harmonize like a chapel choir—the hall has a very church-like acoustic, and Vivier originally trained for the priesthood—but then individual vocal tricks, whistles and echoes and ululations and synchronicities would loom or leap out of the chorale and fade away.

The mezzo, Hai-Ting Chinn, a frequent star of modern operas, was responsible for the mad ululations, which reminded me of Cathy Berberian in Sequenza. Bass Steven Hrycelak came booming out of the speakers at the front of the room as if concluding a sermon.

But we still didn’t know what it was about, aside from the quote of Vivier printed in the program: “Humanity will find its place. It will stop gazing at its navel and feel the infinity that surrounds it. Art will no longer be the sweet panacea that we apply to a wounded body, it will be the body….”