What the cat dragged in

As you can imagine, oaths are sworn, curses are flung with avidity, and a mysterious shepherd sings a tune of foreboding from a distant mountain gorge just when you’d expect it. 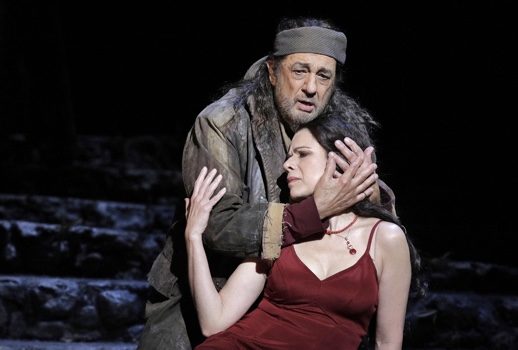 The plaza connecting its three theaters still in the Götterdämmerungian throes of construction (how long has this been going on?) with the promised eventual outcome of nibbles for all.

This is the second production of this show mounted by LA Opera.  The first, in 1994, also starred our Grand Seigneur along with Veronica Villarroel (remember her?) and Justino Diaz.

Having debuted at the Seville Expo in ‘92  it was then co-produced with Opera Pacific (remember them?) with the run opening at the Orange County Performing Arts Center for its out of town tryout (as it were) and then transferring to the Music Center.

Somewhere in there it was also filmed for PBS’ Great Performances and has since ended up on a DVD compilation set of Placido’s Greatest Hits.

The current staging originated from Madrid’s Teatro de la Zarzuela where a certain Spaniard saw it and decided it would be a handsome addition to our season. You see Maestro Domingo’s mother and father ran a zarzuela troupe in Mexico when he was a child and El Gato Montés was part of their repertory so it’s a homecoming of sorts for him.

A triumph at its Madrid premiere in 1917 El Gato Montes ran for 10 weeks in New York in 1920 in English translation with a happy ending tacked on by the composer who was afraid American audiences wouldn’t embrace its fatalist Spanish sensibilities.

The conductor and editor of the Seville Expo production, Miguel Roa, who also led a very fine Deutsche Grammophon recording as lead up to that staging with Domingo, Villarroel, Juan Pons, and Teresa Berganza, is listed in the program as author of the current musical edition as well.

He apparently had second thoughts before his death in 2016 and the revisions now playing downtown actually make a more cohesive dramatic whole of a story that hitherto left two of its protagonists dead by the beginning of  Act III.

The plot, contrived by the composer, involves a love triangle anchored by the Roma Soleá. Loved by Juanillo, he murdered a man who offended her and was sentenced to jail, she was saved from starvation by the Toreo Rafael to whom she is now promised. When Juanillo masterminds a prison break leading a group of banditos he returns to claim his love.

As you can imagine, oaths are sworn, curses are flung with avidity, and a mysterious shepherd sings a tune of foreboding from a distant mountain gorge just when you’d expect it. Twice.

Plus we have cameos from all our favorite operatic characters! Rafael the Toreo’s mother’s name is Frasquita but she’s instantly recognizable as Mamma Lucia from Cavalleria. Same for the fortune teller Gitana who’s really Ulrica from Ballo only this time with a dance troupe.

Padre Guardino from Forza shows up as the local priest Father Antón and Rafael has a wingman named Hormigón who’s a picador (Leporello).  So it’s pretty much old home week for us opera fans.

The composer’s orchestrations are thick with Spanish melismas, glittering brass, and gushing strings. Though his musical vocabulary is certainly grounded in the Andalusian subject he’s portraying it’s easy to hear the influence of the operatic composers of his day as well.

It’s also apparent that while Penella was himself an excellent technician his gifts only take him so far. Just when things get musically exciting there’s either a repeat or a climax where a greater composer would have gone extra and ramped things up even further. Still there are some rousing moments and a few more than I was familiar with thanks to this new scholarly edition.

The production itself is simple and handsome with sloping, textured, ramps that portray rough, dirt roads and a simple canopy for the village square in Act I. Scenery and lighting designer Francisco Leal manages to easily keep focus on the story although I found one of the bigger set piece drops a little questionable.

He is more than ably abetted by costume designer Pedro Moreno who outfitted the chorus of townspeople in a rainbow of subdued jewel tones more skillfully than I have ever seen: dirty yellows, tans, greens, and blues all in perfectly matched hues.

Moreno saves the brightest and purest colors for the dancers and principles including a magnificent black traje de luces for the torero in the second act and an uncomplicated red ensemble for Soleá’s finale. They seem modest at first glance but are some of the most astutely designed costumes I’ve ever seen on a stage.

The musical performance fared even better with an extremely accomplished cast. Rubén Amoretti as Padre Antón embraced the duality of his character as the head of his parish with a somber demeanor when needed yet also brought the comic touches the part called for with a deft skill.

Sharmay Musacchio deployed her rich mezzo with matronly compassion to Frasquita the mother of Rafael the Toreo, especially touching when she was comforting Soleà in her excitement at his return to the village at the top of Act I.

Nancy Fabiola Herrera brought just the right touch of camp to Gitana and her plummy mezzo was put to good use especially when her palm reading turned suddenly serious and she morphed into a Spanish Erda.

Juan Carlos Heredia was an able Hormigòn a part that also required an agile shift from drama to comedy. He sports a fine baritone voice that carried well into the theater and cut a handsome figure in his picador’s uniform.

Niru Liu projected the seemingly innocent voice of the shepherd from the back of the stage and from behind a scrim. No small accomplishment that,

Our Soleà was Ana Marìa Martìnez and she gave her all to the role which included some extraordinarily impassioned singing coupled with moments of worried introspection. Her best was in the Act II duet with our Tenor toreo and her shattering prayer to the Virgin to keep him safe where her voice rang out over an orchestra at full thunder.

She’s a supple actress, moved well, and helped bring more than a little believability to the creaky plot. Any woman who can grab a nearby knife and threaten to kill herself to stop her brawling lovers has my full admiration. Ms Martinez also had the most beautiful Spanish in a cast of nearly all native speakers, albeit from a variety of countries, including that transparent sibilant ‘s’ that many Spaniards have.

Arturo Chacón-Cruz was the Torero Rafael Ruiz nicknamed “El Macareno.” His singing was by far the best and most impassioned I’ve heard from him going all the way back to his debut as Rodolfo in 2007. His recent Duke in Rigoletto was certainly fervent in all the right places but once again with Ms. Martinez he was at his best. Their duet at the top of Act II being a highlight for his fiery abandon and his own prayer prior to going into the ring was a sensation and brought down the house.

As Juanillo the ‘Wildcat’ of the title we have Maestro Domingo down in the bass clef singing baritone. He gave the part a needed gravitas in the confrontations with both the soprano and the other tenor and at 78 years old he can still pull off 40-something with a wig.

Although he may be moving a little more stiffly than in seasons past he did spend the better part of the last scene down on his knees. You can’t pretend however that the vocal writing is anywhere near as formidable as the Verdi roles he’s been taking on and this part was probably a nice respite from the more taxing assignments of late.

In the pit we had Jordi Bernàcer leading the LA Opera Orchestra with an exceptionally firm hand. His was a propulsive performance that easily integrated the scores local tinta as well as the many dance sequences. Especially alert in the famous pasodoble, which is still played at every bullfight apparently, he kept excitement levels high.

It started promisingly as a sort of ‘Dream Bull-et” but ended up having more to thank Busby Berkeley for than Andalusia. My one admonition with Maestro Bernàcer is that there was a lack of attention to dynamics in general (everything at a good strong forte) and he ended up covering the singers in the many instances of accompanied recitative throughout the work.

The stage direction of Jorge Torres coupled with the flamenco choreography of Cristina Hoyos and Jesus Ortega did its level best to tell this overworked story to a public that may have been unfamiliar with the piece but almost always knew what was coming next. The chorus gave an excellent performance as well in a work that relies on it for more than just a little local color.

With the major changes to the plot and musical revisions anyone who saw the original production will find this a far more satisfying and dramatic experience. Most especially because of the caliber of the singing and this striking production. Four more performances remain until the 19 May. Olé!