Mozart appears to find promiscuity a source of humor rather than something that is a fundamental problem. 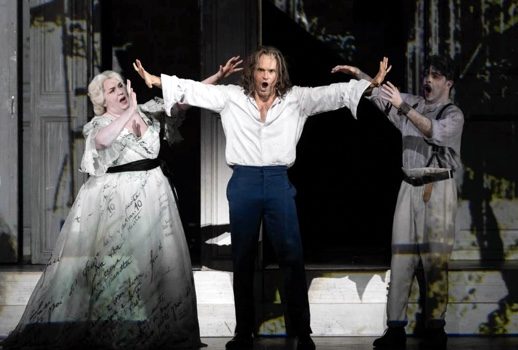 Don Giovanni, one of Mozart’s greatest operas, is the middle of the three collaborations with librettist Lorenzo Da Ponte (who is the subject of the other opera playing at Houston Grand Opera right now, The Phoenix.)

As that piece makes clear, Da Ponte was definitely a womanizer in his youth and we know he counted the famed Giacomo Casanova as a friend, so Don G could conceivably be based on Casanova’s life.

But we also know that the young Mozart too was a womanizer, so although this opera was composed later in Mozart’s life after  he had married, there is almost a joyful exuberance to the revelations about quite how much sleeping around the Don had clearly done.

The opera itself is almost a commentary on the necessity of passing through that stage in life and acknowledging ones errors along the way in order to be taken seriously later in life.  Don Giovanni unapologetically refuses to apologize or atone for anything, including murder, and that is essentially the moral of the opera: unless you atone and apologize, you are on a fast track to join the Don in hell!

But the story has many levels, and so also deals with class, gender roles and the power of money and wealth in society.

From my own point of view, by the intermission, I was wondering whether the opera would have had the same conclusions if the murders were not part of the plot.  Would Da Ponte have had the story end the same way if there was just the promiscuity without the murders?

Musically, Mozart appears to find the promiscuity a source of humor rather than something that is a fundamental problem, but of course if the main moral of the story revolves around pre-meditated and unrepentant murder, then why bother with the promiscuity as well?

This Houston Grand Opera co-production with the Royal Opera House, Covent Garden, the Gran Teatre del Liceu and The Israeli Opera is directed by Kasper Holten, with set design by Es Devlin, costumes by Anja Vang Kragh and the all-important video element created by Luke Halls.

The opera opens with a wall of panels and doors as far as the eye can see, and then the writing starts: “Anna” is written by projection on one door, and then the handwriting spreads to cover nearly the entire façade, like 18th century graffiti. The text consisted of names of women, obviously represents all the women that Don Giovanni has seduced.

Later, there was also the suggestion of other murders—three ghosts floating around towards the end of act two—in addition to the ghost of the Commendatore that is the central theme of the opera.

The HGO program articles left no doubt in my mind that this set design was in part a symbolic commentary on what goes on behind closed doors (a issue which has become particularly relevant in the #MeToo era), with the wall of doors returning for Commendatore’s final entrance at supper.

The set is ingenious: four of the doors separate from the wall and then become a two-story cube which rotates to show you the inside of the building and then it sometimes rotates even during scenes which became a little irritating at times.

The cube came into its own in the party scene and, later, when characters had to find hiding places.  However, at times the singing became lost in the interior of the structure, particularly when characters were singing while walking up and down stairs.

Ryan McKinny played Don Giovanni, and with his long flowing blonde locks and shirt open to the waist, he certainly had the look and swagger of an experienced womanizer.  In terms of his delivery, to my ear it was sometimes lacking in some registers, and didn’t always have the vocal impact that I would expect from the lead role.

The abused sidekick, Leporello, was played by Paolo Bordogna, who every time he appeared on stage, seemed to surprise the audience in terms of the sonority of his voice considering his small stature.

Ailyn Perez played Donna Anna, blowing he audience away with her superb full-throated delivery, even tone and seamless transitions between her upper and lower registry.

Melody Moore played Donna Elvira with distinction and presence but was frequently upstaged by Ailyn Perez’s singing.  Ben Bliss played Don Ottavio and impressed the audience with his smooth mellifluous tone and agility on some of the arias in Act II.

The other stand out as far as I was concerned was Daniel Noyola, who handled the role of Masetto with such a great dignified lyric baritone voice that I hope he is given some more major operatic roles in the future.  Masetto’s soon to be wife, Zerlina, was played by Dorothy Gal, who had trouble in creating the right balance between her upper register and mid-to-lower register, and also appeared a little wooden onstage.

All around, then, this was a Don Giovanni that certainly asked some interesting questions and was well worth seeing.