Oh, that slippery Don Giovanni—so elusive, so chaotic, so open to no end of interpretation!

Oh, that slippery Don Giovanni—so elusive, so chaotic, so open to no end of interpretation!

I mean the opera, of course, not just the character. Don Giovanni is remarkably malleable from staging to staging, even more so than the average canonical work in the era of Regie.

Its large cast and the ambivalence with which it seems to offer focus and identification in equal measures to its titular miscreant and the people he spends the opera deceiving, assaulting, and attacking make the task of the director as much one of allocating empathy and accountability as choosing a setting.

Emma Griffin’s production for the Juilliard School has its heart and its brain finely calibrated, presenting an interpretation of the opera that is clear-eyed and nuanced, denying neither the humor and charm of a man like Don Giovanni nor the monstrousness of his actions, the men complicit in his behavior, and a society that allows him to run rampant.

One of Griffin’s greatest assets is her cast, all of whom give committed, energetic performances. Hubert Zapiór as Don Giovanni is commanding, seductive and truly frightening by turns, all with a libertine’s richness of voice.

He shines his brightest in moments shared with Erik van Heyningen’s Leporello, who brings a lively bass-baritone and an affable looseness to the role that gives way all too easily to smirking complicity in Don Giovanni’s mistreatment of women.

Van Heyningen reveals Leporello’s hapless charm to be in its own way as deceptive as his master’s seductiveness. He complains about Don Giovanni’s libertine lifestyle, but, from taunting Elvira with his catalog to keeping Masetto occupied so the Don can abduct Zerlina, when push comes to shove he never fails to rally behind his master’s machinations.

Like a poor American who votes down tax reform because he sees himself as a rich American in waiting, Leporello will take whatever hurt Don Giovanni dishes out on the assumption that what’s good for the patriarchy must be what’s good for him too. 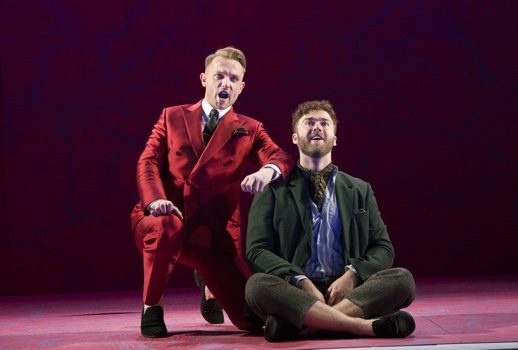 It is a testament to the strength of Zapiór’s and Van Heyningen’s performances that they are able to simultaneously come across as little boys who are having all the fun in the world at everyone else’s expense and also as genuinely funny comedic partners, who share a real and not unappealing chemistry.

They commit to doing vocal impressions of one another amidst the clothes-swapping mishegasof Act II, and hearing van Heyningen adopt an accurate-if-over-the-top honeyed baritone and Zapiór put on a likewise on-the-nose gruff gung-ho bass-baritone is both laugh-out-loud funny and auditory evidence of a long and intimate relationship between master and servant.

But by the end of the opera, when Don Giovanni is unable to even eat dinner without making it all about tormenting Leporello, all I could think was that the two of them deserve nothing so much as each other.

If Leporello and Don Giovanni are obnoxious in their codependency and narcissism, it is in stark contrast to the openness and empathy displayed by this production’s women.

Maritina Tampakopoulos and Meghan Kasanders, as Donnas Elvira and Anna avoid all “crazy-girl “sad-girl” cliches, not only by sheer force of stage presence, wherein Kasanders’ Donna Anna is unmatched by any of the cast, but also in the way they listen to one another on stage.

In moments of disclosure and vulnerability—when Donna Elvira begs Donna Anna not to trust Don Giovanni, for example, or when Donna Anna balks at joining his party guests—the women model a trust and an empathy that the audience can then join them in extending to one another in.

The production makes it so possible to really feel Elvira’s abandonment and Anna’s trauma that when Don Ottavio, played with conviction and a little stiffness by James Ley, starts going on about obtaining more proof that Don Giovanni is no gentleman, he comes across as borderline delusional.

These rich performances unfold against a lightly sketched production setting—the set is more or less a corridor, albeit a very stylish one, covered with an abstract patterned wallpaper of leaves or maybe sea anemones. 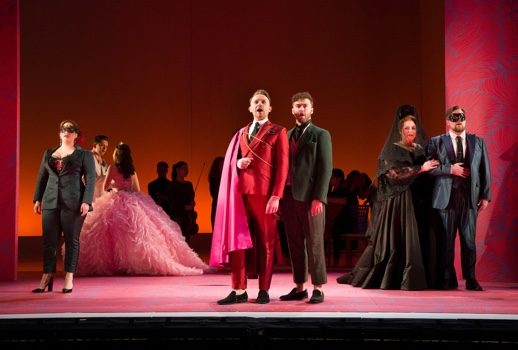 This small, static space averts dullness by offers many different entrance and exit points and by virtue of the beautifully expressive lighting, by Mark Barton, which is able to create fully distinct moods even against an unchanging backdrop. When the backdrop does, ultimately, change, it is not so successful a transition; more space is opened on stage, but it is not really space that can be sung from, so Griffin instead resorts to some distractingly wandering supers and dancers that don’t add much to the experience.

Don Lagerfeld aside, the opulence of the costumes makes more sense when we encounter Zerlina (Jessica Niles) and Masetto (Gregory Feldmann), she in a hot pink Jersey girl rhinestones-and-ruffles prom dress and he in a badly-fitting white suit—the class difference between Zerlina and Masetto and the rest of the cast is highly legible, and with it, so is their relative powerlessness in the hands of a gentleman like Don Giovanni.

Niles is the only undergraduate in the cast, and her Zerlina is a sweet-voiced spitfire who more than holds her own, vocally and in terms of star power.

There are moments in this evening that are less than perfectly vocally polished—Ley’s breath does not always last him to the ends of phrases in “Il mio tesoro,” for example, and Tampakopoulos has some intonation issues on the vaulting intervals of “Ah, chi mi dice mai”—but I find them easy to forgive, given the overall quality of the singing, the acting, and the reading of the opera that acting realizes.

Without gimmicks, without resorting to revisionist rewriting, Griffin has staged a Don Giovanniin critical conversation with contemporary discourses of power and privilege. Apparently, you can teach an old Don new tricks.