Mage of all work

Utopia Opera is fond of the less well known branches of the Savoy repertory (as the company name suggests), and is currently (through next weekend) doing a job on an early and rare bird of the flock, The Sorcerer. 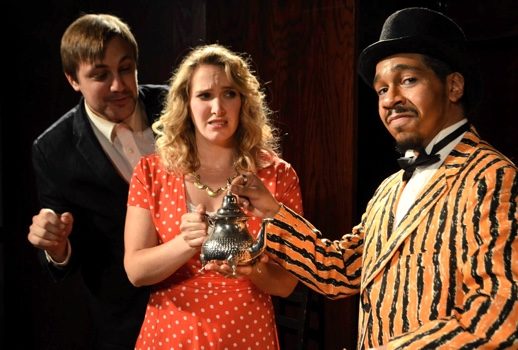 Nothing daunted by the postage-stamp-stage of Lang Recital Hall at Hunter, half of which must be ceded to the orchestra, Utopia Opera has spent most of a decade staging Gilbert & Sullivan and a great deal else (Douglas Moore, Philip Glass, Thea Musgrove) with admirable wit, invention and musicality.

The company is fond of the less well known branches of the Savoy repertory (as the company name suggests), and is currently (through next weekend) doing a job on an early and rare bird of the flock, The Sorcerer. A number of witty performances and some unexpected staging touches make it a charming occasion.

The Sorcerer is not one of the more popular Savoy operettas: Neither Gilbert nor Sullivan had hit his stride. (They would do so, triumphantly, two seasons later with H.M.S. Pinafore.)

Gilbert, though famous as both a playwright and a satirical poet (and creator of operatic pastiches like Pretty Little Druidess, in which Norma elopes with Julius Caesar), had not figured out how to pace his satirical invention, to make the engine move along at speed, alternating bits of surreal dialogue with verses for Sullivan to inflate with melody. The jokes in The Sorcerer are often good, and absurd, but slow, and Time has placed a weighty hand on many of them.

As for the music, the Act I Finale (a demonic spell cast upon a country village by the representative of a respectable family firm of London sorcerers) is a sendup of Weber’s once-popular Freischützas well as great fun on its own bat—Gilbert writes terrific slithy spells; Sullivan has fun with “uncanny” orchestration.

But this is the highlight of a dullish score: each character gets a pallid two-verse aria (or two) to illustrate a rather wan personality. Only the wonderful Sorcerer, John Wellington Wells (a Londoner not a hick) is exempt: he performs the first of that glorious parade of G&S patter songs, plus the spells and a “revenge” duet—“The vault!” they cry; “The family vault!”—that brought down the house.

But when he’s offstage, the vehicle may lose its (laughing) gas, and run down accordingly. Sullivan just isn’t invoking Donizetti or Handel or Offenbach at his usual level.

The plot in brief: Alexis Pointdextre, an upper-class twit of the first water, social revolutionary division, is betrothed to Aline Sangazure. Since being loved has made him the happiest man on earth, he is determined to impose its delights on all man- (and woman-) kind. Alexis is the most obnoxious character in all G&S, but Gilbert knew humanity well; Alexis calls to mind humorless rebels in many a cause.

He hires J.W. Wells (&c.) to put a love philtre (sic) in the village tea to test his theories. Everyone duly falls in love with the wrong person. (I was reflecting what fun Gilbert would have had in the days of Marriage Equality, but company producer and conductor William Remmers was way ahead of me.)

At last, on the demands of her nitwit fiancé, Aline, though already in love with him, drinks the potion—and meets the wrong man. Meanwhile, his father the baronet has fallen in love with a pew-opener (a what?) and Aline’s aristocratic mother has fallen for the cockney Wells himself. She offers to drop her aitches for him. The accents in this production are rather more precisely turned than those at a certain musical currently playing the Beaumont.

The only way to save the situation is for someone—Alexis (who would miss him?) or poor Wells—to be sacrificed to the Powers of Darkness. Gilbert tied it off quickly with the incineration of Wells and a choral reprise to a general pairing-off.

No one has ever liked that ending. It’s so unfair! Isaac Asimov, a passionate Savoyard, wrote a story, “The Up-to-Date Sorcerer,” with a more logical, scientific, indeed Gilbertian, twist—everyone marries their new romantic partner and, on promptly losing interest in them, divorces. (Kennst du die Mutter Künste nicht?)

A generation back, at the old Jan Hus Playhouse, the entire cast vanished in a sudden blackout—only J.W. Wells survived, surprised but chipper. The audience of traditionalists roared its approval. At Utopia, still another sly alternate ending is proposed. Maestro Remmers has, in addition, dug up a scene discarded by Gilbert, and set it to Sullivan and Mozart for a second supernatural pick-me-up. Why not? The magic is the best of the fun.

Utopia is a company that dances—skips—sidles—performs agile tricks. They often supply lively energy where the stage directions suggest a procession or a stately chorale. Is there too little room for a dance routine? They’ll do a few dance steps anyway. Nobody sleepwalks. (That’s Bellini.)

The star was, naturally, John Wellington Wells. Brian J. Alarado had the flair, the dapper moves, the precise patter elocution and the obsequious insolence for this character—without such qualities, the show would lack point. He also sings with a liquid baritone of great charm.

As the foil to his follies, Luke van Meveren’s Alexis, tall, rolling-eyed, breezily unaware of the humor of his inane speeches (not seeming to realize you are funny is, in G&S, half the wit), was aristocratically right if a bit dry of voice.

Dr. Daly is supposed to accompany his song with a flageolet, a skill rare among tenors nowadays. At Utopia, they put a bird on his shoulder (impersonated by a flute) and have him exchange notes with it. When an amorous female spies them, in mid-song, she hurls the bird over the scenery. Trust Utopia to get life into this show!

That ardent young woman, Aline Sangazure, was played by Allyson Herman Kurian, who has the curly blonde locks for Gilbert and the lofty top notes for Sullivan. She also says her sillier lines with a deadpan so flat you could use it to cook omelets—brava!

Julia Snowden, handsomely got up as Margaret Dumont, sang a full-throttle Lady Sangazure and nearly raised a tear when offering to sacrifice her grammar for love of low-born Mr. Wells.

I’m not at all sure why Sarah Marvel Bleasdale (as Mrs. Partlet, the pew-opener) and Hannah Madeleine Goodman (a very adept coloratura, as her lovelorn daughter, Constance) played these English villagers with French accents, but chewing those over got us through some dull dialogue and gave Bleasdale some French things to do with her body during the quintet.

Remmers’s 17-piece orchestra sounded scrappy during the overture—was that a harmonic progression or a bloop?—but then, this was opening night. They’d worked harder on the incantation and magic scenes, and it showed.

The surtitles are subtle—unnecessary to Savoyards and, considering the diction of the company, patter and otherwise, unnecessary throughout. But they may help you catch dated references like the long-drawn pun on “philtre” and “filter,” Gilbert’s most desperate.

Savannah Shearouse is credited for “Creature Design and Creation,” and you may ponder which ghastly movies she’s been watching.