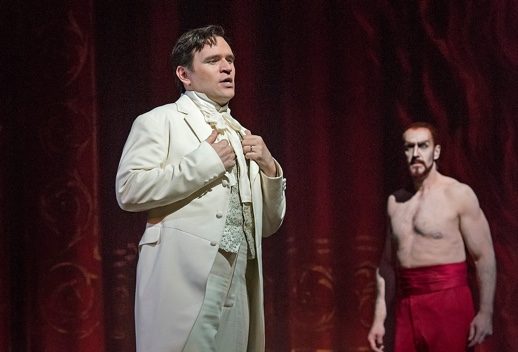 Such has been the case with past stagings of Mefistofele, Arrigo Boito’s 1868 rendition of the Faust legend. Flipping through past playbills reveals a rolodex of big names, a constellation of supernovas, each of whom left an indelible mark on the title character—Christoff, Siepi, Ghiaurov.

But since at least the 1980s, the name most associated with the role is that of Kansas-bred bass-baritone Samuel Ramey, who made the smarmy role his own, often with his wavy mane shellacked within an inch of his skull, often with his shirt off.

Last night, after months of swirling rumors about why this opera’d been included in the season, the Met reprised a production that in 1989 had made full-blown stars of both Ramey and the young director Robert Carsen.

Boito’s pious, Wagnerian opera may not be for everyone—it sometimes feels solemn and self-serious to the point of severity. But 30 years after its premiere, Carsen’s take—huge and harlequin, ambitious and sexy—remains a total feast for the eyes. It lightens the opera’s dourest points, while giving its leads (in this case a trio of well-known American MPVs) a devilish vehicle to shine in.

In Carsen’s hands, linear time and narrative continuity both take a back seat to visual maximalism. Everything’s bright and explosive and on acid. The streets of Frankfurt where Dr. Faust first encounters the devil are now a 19th-century Venetian festival with revelers who look like extras from a Kate Bush video; the Witches’ Sabbath on the Brocken becomes an Isherwood-worthy cabaret; the garden where a rejuvenated Faust woos Margherita is a tilt-a-whirl orchard; and heaven, backdrop for the opera’s renowned angelic hymn, here resembles the kind of secret society you’d spot Tom Cruise at (Kubrickian, not Scientologist). 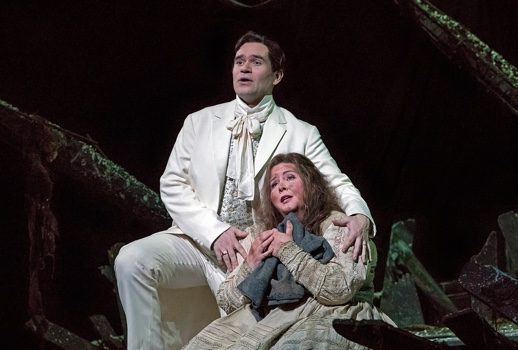 The rest of the scenery, by the brilliant set and costume designer Michael Levine, is constructed to evoke the inside of a Baroque theatre. It’s an effective mimetic device, one enabling the audience to take a reflective step back the spectacle and embrace this picaresque for what it is: an illusory world, where a single drop of a curtain transports you from the confines of Faust’s observatory to the ancient times of Helen of Troy.

At the helm, conductor Carlo Rizzi and the Met orchestra ably conjured the score’s more spellbinding moments, like the seraphs’ entrance in the prologue, though it helped that the Met chorus was sounding especially full-bodied on opening night.

Of course, in Carsen’s staging, “full-bodied” is a goal taken to literal extremes: in act one we get strippers, and the witches and warlocks of act two are blocked to essentially twerk and shake all manners of prosthetic anatomy at their (interested and totally game, but also maybe a little unprepared?) audience. This “Rampiamo, rampiamo” is definitely one for binoculars.

While his 76-year-old predecessor was off milking cows in the Deep Midwest, Van Horn proved himself a youthful and extremely resonant master of the underworld, his tone velvet in midrange like Ramey’s but somewhat coarser along the outer edges.

I will say it’s a pity the Met won’t budge more on letting the baritone make the role his own.  While he wore the red bathrobe and slippers well, much of Van Horn’s characterization felt like Ramey redux (even the muscles), and I longed for a more innovative portrayal.

Fabiano, meanwhile, did what Fabiano does so well: perfectly Italianate singing, about 90% squillo, and gorgeous line. His “Dai campi” in act one was delivered with enormous musicality, soaring over the orchestra in that way of his that has me forgetting to breathe sometimes.

I am sorry to report that the sinister intensity is still all there, too. But you know there’s nothing he can do about it. It’s just who the man is.

Meade is miscast as Margherita, her voice lacking the rustic coziness of a Tebaldi or a Freni, but she makes the most of her mad scene, successfully incorporating the runs that most lyrics in her cohort tend to flub.

It occurred to me as I watched her and Fabiano roll around in the garden scene that their voices might have been a better fit for Verdi (weren’t they slated to do Lombardi at one point?), but their chumminess was palpable, their voices blended well, and it was a pleasure seeing them together onstage.

Among the notable supporting players, soprano Jennifer Check was a refined and elegant Elena of Troy, tenor Raúl Melo a charming student Wagner. And as Pantalis, the company debut of mezzo Samantha Hankey, who is going to be a very big deal someday.

All told, by the end of this lengthy opera I mostly found myself wondering why the Met doesn’t enlist Carsen to direct more often? If he can make hell look like such a party, after all, just imagine what he could do for, well… a better opera?