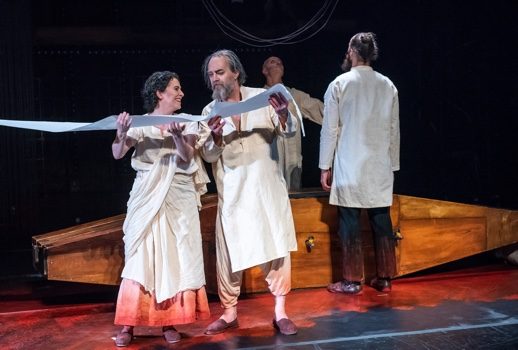 With a crucial political faceoff ahead, and seemingly everything hanging in the balance, BAM brings us a political opera featuring… literal balancing acts.

Tilde Björfors’ production of Philip Glass’ 1979 work Satyagraha, which ended its too-brief run Sunday at the Harvey Theater, tells the story of Mohandas Gandhi’s non-violence activism on behalf of Indian immigrants in South Africa. But where other stagings take pains to foreground the heady symbolism of the score, Björfors goes all visual, lining the stage with Swedish acrobats and circus performers from Circus Cirkör and players from Stockholm-based company Folkoperan.

Destined to come crashing down, you say? Not so fast. Despite a cocked eyebrow walking in, I  left the venue feeling floored: not only did the circus/Gandhi combo work, it downright trapezed into my heart.

Glass’ opera, which moves through a series of nonlinear dreamscapes set to the Bhagavad Gita’s ancient texts, is ultimately about what it means to commit to a community of protest, the seditious oaths we take, and the proper motives of our insurgent behavior.

The spare libretto—adapted from Sanskrit by Constance DeJong, and it spans not even a full two pages—winds its narrative around four different years in three acts, using the composer’s trademark hymnal arpeggios to chronicle Gandhi’s 1913 satyagraha, or act of civil resistance, against the oppressive Europeans who wish to keep South Africa’s proletariat in an iron grip.

Suffice it to say that with this piece, directors have their work cut out for them. How to sustain interest over a fairly icy and iterative composition—the violins, winds, and organ (arranged for a smaller orchestra by Anders Högstedt) playing figure eights over and over, as a chorus intones Krishna’s advice to Gita hero Arjuna?

How to direct focus when the acts’ respective tableaux couldn’t appear more disjointed? How to give historical figures human depth when all they’re given to sing are bits of esoterica like “When a necessary action is properly performed as a righteous duty, abandoning even attachment to its fruits, such renunciation is thought to be true”?

Bjöfors smartly rises to the challenge by appealing to fantasy and whim. The Indian cooperative community known as “Tolstoy Farm” in this show becomes a spinning collective, where contortionists balance on enormous piles of yarn, and workers roll across the stage on yarn balls. The newspaper scene named after Gandhi’s 1903 protest newspaper Indian Opinion is here an occasion for hovering typewriters and aerials.

And while the stage is spare, it’s totally arresting. Sets and costumes by Björfors and Dan Potra wash the arena in blood reds and ghostly whites—distant reminders of the violence Gandhi’s movement engendered—while Patrik Bogårdh’s lighting design (with video by Visual Relief) exploits scrims and projection to enhance the opera’s floating, dreamlike atmospherics.

On Sunday when I was at BAM, musicians (expertly led by conductor Matthew Wood) and singers were also first-rate. Standouts included lyric tenor Leif Aruhn-Solénas Gandhi, who was especially touching in the work’s final scene; and Swedish mezzo Karolina Blixt, who sang the chief of police’s wife from ten feet above the stage. Baritone Lars Johansson Brissman lent a warrior’s dignity to the role of Arjuna. The work’s eight-member chorus provided strong support throughout.

Sitting down with dramatist Magnus Lindman for an interview included in the program, Björfors called Glass’ minimalist, scale-driven score “perfect circus music,” and explains that both media are “incredibly virtuosic art forms” that “try to make the impossible possible and cross the physical and perhaps mental borders of what we humans are capable of doing.”

I reckon it’s more complex than that. By adding bursts of operatic spectacle that thrill with the danger of circus—tightropes over fire, human columns, aerial silks—this production also brilliantly evokes the precariousness, as well as the joys, of insurrection.

As dueling productions of Satyagraha are mounted at BAM and the L.A. Opera and elections are just a headline away from deciding the fate of the nation, no question the time seems right for this kind of message. Hopefully, though, today is less circus than justice-restoring tide of opposition, vindicating, epochal, setting things right again for the rest  of us.