The Hungarian State Opera and Hungarian National Ballet opened their visit to Lincoln Center Tuesday night with the US stage premiere of their “national opera” Bánk Bán. 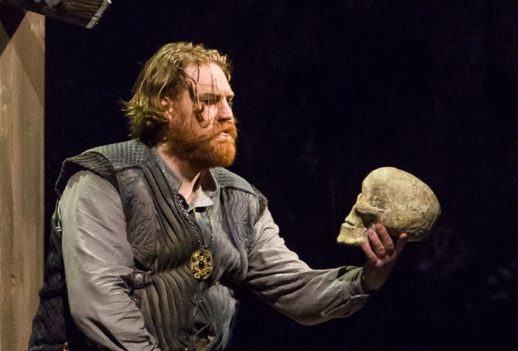 One expected all to put their best foot (feet?) forward: the good news was that the opera was well worth hearing; the bad news was that its arrival was compromised by a cheap-looking, old-fashioned production marred by an ear-assaulting duo of leading ladies. As the ambivalent Viceroy Bánk, vibrant baritone Levente Molnár—who recently sang Marcello and Malatesta at the Met—struggled to elevate the sometimes not-so-gala occasion.

The tale of a 13th century insurrection against a corrupt nobility had been turned into a play in 1819 by József Katona but it and the libretto adapted from it by Béni Egressy were heavily suppressed during Hungary’s oppression for much of the 19th century. When the political climate relaxed enough in 1861 for Erkel’s overtly patriotic opera to premiere it was a resounding success. Over 150 years later, the hero’s ardent aria for his homeland (originally written for dramatic tenor) unsurprisingly won the evening’s most enthusiastic applause.

The uneven first act dutifully sets up the plot along with two drinking songs, the first rousing one by Petur (a virile Zsolt Haja) one of the nobles appalled by the corrupt excesses he observes at a royal court overseen by the decadent foreign-born Queen Gertrud in the absence of King Endre II who is off leading his army.

Petur’s ally Bánk has been in exile but the queen has invited his comely wife Melinda to court where she is accosted by the queen’s lecherous brother Ottó who first drugs and then rapes the unwitting spouse. The long, frustrated seduction duet between Melinda and Ottó seemed to be developing some interesting musical ideas but the squeaky shrill piping of Zita Szemere against the pinched pleas of István Horváth put up serious roadblocks to aural pleasure.

After intermission the fineness of Erkel’s music improved as did Balázs Kocsár’s previously limp and meandering conducting. In the first of three demanding and remarkably effective duets which eventually exhausted Molnár, Bánk has a poignant reunion with Tiborc (the wooly bass István Rácz) whom he initially fears may be a bandit about to rob him but he learns the old man is a war hero who once saved the viceroy’s life. Tiborc has turned to thievery after becoming desperate to feed his family, a situation blamed on royal neglect.

Bánk then encounters his dishonored Melinda who has been driven nearly insane by her misfortunes though her enraged husband scarcely seems to notice her newly distracted behavior. By this point the audience has become accustomed to Erkel’s pattern of slow give-and-take interactions followed by faster cabaletta-like conclusions. The most striking passages here were the elaborate viola (soulfully played on the side of the stage by Veronika Botos) and dulcimer accompaniment for a part of the Melinda’s contributions to the duet.

After the now-calmed husband turns over his wife and child to Tiborc, Bánc seeks revenge by confronting Gertrud in her private chamber. The proud queen goads the increasingly desperate husband driving him to stab her, an intense scene robbed of any electricity by Molnár’s comically delicate hero-handling of imperious, voiceless Judit Németh whose hoarse ranting made one at least grateful Gertrud is a relatively short role. I was surprised to realize that Németh more than a decade ago was an acclaimed regular at the Bayreuth Festival!

After this intense troika of encounters, the third act proved an anticlimax although the entire first scene—a potentially dazzling mad scena  for Melinda—would have been more persuasive if Szemere offered the technical aplomb including many trills necessary to pull it off. Perhaps because Orson Welles has been on my mind thanks to the upcoming premiere on Netflix and in theaters of his recently-completed final work The Other Side of the Wind, my mind flashed to Susan Alexander Kane’s Salammbo aria as Melinda yelped her final high note.

The final scene crystallizes the conundrum of the opera’s conflicted title character—Bánk never fully commits to either the political or the personal. His “heroism” consists of murdering the corrupt Gertrud but he does so for revenge rather than to rescue the country’s suffering masses. His fate remains ambiguous: dying of grief over the deaths of his wife and child rather than surmounting his guilt and pain to forge a better future for his people. His plaintive “Házam, házam” rings slightly hollow in retrospect.

Bánk’s elusive heroism is further muddied by confusion about the musical edition used. The note in the program was unhelpful in sorting out the tangled history of Erkel’s signature work. He and his musician sons Gyula and Sándor continued to tinker with the opera for years, never settling on a definitive version. In the twentieth century other hands have extensively restructured both the libretto and the score even transposing the title role from tenor to baritone. It would seem that more recent efforts have attempted to return to the “original” and yet we had a baritone sing Bánk—it was all hard to sort out.

Attila Vidnyánszky’s penny-plain production blandly set forth the occasionally muddled action in Oleksandr Bilozub’s ugly plain grey unit set whose most noteworthy feature was a bizarre rocking double-throne! A major feature of Viktória Nagy’s thrift-store costumes might have been telegraphing Gertrud’s evil nature by garbing her in a regally unflattering pantsuit.

Kocsár’s large orchestra and chorus, once warmed up, did well enough but Erkel’s efficient at times inspiring music didn’t present great challenges. To my surprise the expected folk influences don’t feature very prominently, and one heard traces of early Verdi (particularly in King Endre’s scene forcefully sung by bass Marcell Bakonyi) and Meyerbeer in the ensembles that end the first and third acts.

As with Moniuszko’s Halka recently, while I didn’t come away believing I’d been missing out on a major work I was grateful for the opportunity to finally experience Bánk Bán. Sometimes though I wanted to close my eyes–or my ears when the shrieking/braying prima donnas went at it.

Bánk Bán repeats on Saturday but next up is a double bill of Bluebeard’s Castle and Mario and the Magician by contemporary composer János Vajda. A single performance of Goldmark’s Sába királynöje (in the original German, of course) then arrives on Friday.