Take me out to the bull game

I braved the alarming and majestically colorful wall-graffiti-art of Bushwick to attend Bullfight Boylesque, which runs to October 28. 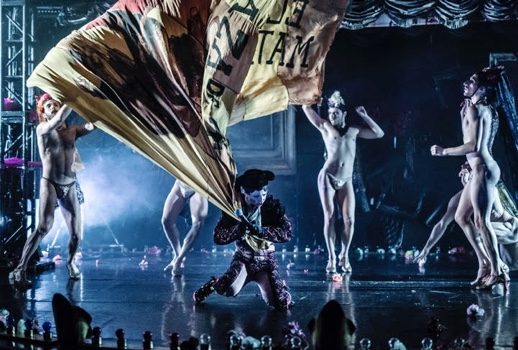 “If you want to grind it, wait till you’ve refined it.” Austin McCormick clearly took that motto to heart (from the Proverbs of Solomon, isn’t it?) when he spruced his little dance group, Company XIV* and revitalized it as New York’s most sophisticated Theater of Bawdy.

Occasions like Nutcracker Rouge and Paris (as in The Judgment Of) have been noticed for those in search of a good time, butts that thrum to a tango beat or a Handel air, trained ballet troupers throwing caution and most of their spangles to the wind. Naturally this is part opera.

True, they have been know to draw a loud and lowbrow crowd, out-of-towners agog for the high but not noble life, staggette and bachelorette parties shrieking at the zip of male flesh as it whirlwinds by, even the occasional sedate gay birthday bash.

But the bad boys of Bushwick (where the company is currently domiciled) have been discovered by none other than the Met, which hired Austin to choreograph last year’s production of Rusalka—for once the dullest Act II in all opera was lively enough to keep eyelids high.

This year, for Opening Night no less, Austin choreographed and five or six of the stars of Bullfight Boylesque, his latest show, shook  their bully.

However, I braved the alarming and majestically colorful wall-graffiti-art of Bushwick (the Jefferson stop on the L line) to attend Bullfight Boylesque, which runs to October 28.

Ferdinand, you remember, in the ancient traditional Vizigothic-Moorish folk tale first invented by Munro Leaf in 1936 (A.D.), would rather smell the flowers than fight other bulls, much less sword-bearing matadors. In the Disney version of 1938, the only thing about the matador that turns him on is a daisy chest tattoo, which Ferdinand licks—an incident that (one suspects) inspired much of the choreography in Bullfight Boylesque.

There is a great deal of highly athletic soft-core glitz here with many an in-joke, everything commencing with Spanish themes. Steps begin with a flamenco stomp and then dissipate in every direction the music and the story imply. Then they turn into whatever the tunes suggest, and the taste is broad.

Yma Sumac shows up on the soundtrack a couple of times. There’s a song about Ferdinand who never learned to fight. There are three or four numbers from Carmen set to more popular beats, and the boys can segue from seguidilla to boogie-woogie to mambo to disco at the snap of a fan.

Ferdinand is petite Ryan Redmond, who manages to imply he is too intoxicated by flowers for much activity—this while he is performing all sorts of smooth stunts, and the other bulls are becoming flowers or flower maidens on the instant.

And then bull meets bee. Remember the bee? (as Anna Russell might say.) The bee is an important part of this sadomasochistic pas-de-trois. Cue Gloria Gaynor singing “You’re My Honeybee, Come On, Sting Me” (that took me back), and there’s buzzy Rimsky-Korsakov for the flowery corps de ballet.

László Major dances the bee with terrifying athleticism, plus a Rose Adagio with the flowers themselves. And then he stings shy little Ferdinand. Well, it’s memorable, and it brings on a troupe of rough-hewn roustabouts from the bullring, who just happen to be scouting for talent.

The rural pasture becomes a bull ring, the dusty roustabouts don mantillas to become glamorous ladies of Spain. Zane Philstrom did the many costumes, as inventive as they are attractive, and surprisingly multilayered considering how little they actually conceal.

Then enter the matador in more lights than suit. It is soprano Marcy Richardson, star of many a Cavalli and Handel opus on local opera stages, long renowned for singing arias while pole- or hoop-dancing in mid-air, and who tops—perhaps (for the tessitura) I should say bottoms—these triumphs with a rendition of the Toreador Song that fails to interfere with her aerial twirl.

Ferdinand still doesn’t want to fight, but he is visibly awed, like the rest of us. They make friends. It’s a happy, many-scented ending.

There were guys doing pliés and splits on the subway platform as I headed home, so I was pretty sure they were with the company. Hard to tell when everything I had been staring at was covered up in civvies. They were still in post-performance high, and delighted with McCormick; they told me, as others have, that he chooses dancers whose particular expertise he can make use of, that he encourages them to explore what they do well and fit it into the company’s narratives.

“But he also tests us—urges us to try things we’re a little afraid of, not quite ready for.”

So it’s an opportunity all around.

* Pronounce that any way you like, but I’ve a personal fondness for “Compagnie Quatorze”—the name was chosen in honor of leggy King Louis’s spectacular taste for the theatrical.