While Farinelli and the King isn’t the only Broadway play to have explored castration (Sweet Bird of Youth, anyone?) it’s likely the first to concern a legendary 18th century opera star. O Sleep, why dost thou leave me?

While Farinelli and the King isn’t the only Broadway play to have explored castration (Sweet Bird of Youth, anyone?) it’s likely the first to concern a legendary 18th century opera star.

Premiered at London’s Globe Theatre, Claire van Kampen’s serio-comic spin on historical events at the Spanish court has been attracting crowds to the Belasco Theatre primarily as another flamboyant romp for her husband Mark Rylance but it transcends his florid performance to become a moving if uneven investigation of the transformative power of music.

Even those unfamiliar with baroque opera might still know of Farinelli, born Carlo Boschi, the most famous castrato. At least three current singers—Vivica Genaux, Philippe Jaroussky, and Ann Hallenberg—have recorded arias written for him and there are an astonishing number of them to choose from. In just three seasons in London alone, he sang 15 new operas!

In 1984 the French director Gérard Corbiau made an opulent highly fictionalized film about his life that attracted large audiences world-wide. For all its excesses the movie vividly captures the near-hysterical public adulation Farinelli encountered during his public career.

Van Kampen’s play quickly pushes past that time of his life to meditate on the long mysterious period during which the world’s most famous singer sang for only one listener. When we first see the king he suffers from a fearsome sleeplessness that drives him to manic despair and he becomes increasingly hateful toward his devoted Queen Isabella and unable to conduct the business of running the country.

The government, embodied in the figure of De La Cuadra, grows desperate for a solution to the point of setting the wheels in motion to have the king deposed.

Having temporarily fled to London Isabella hears Farinelli and invites him to travel to Spain to sing for Philippe. In perhaps history’s first instance of “music therapy” hearing the famed castrato’s voice instantaneously brings about a remarkable transformation: the king becomes calmer, happier and able to resume his duties as monarch.

This miraculous moment occurs 30 minutes into the play and consequently the crucial weakness of van Kempen’s work exposed: not much of dramatic import transpires during the remaining act and a half.

During their playful and affectionate bromance, we witness Philippe struggle to maintain his equilibrium while Farinelli finds to his surprise that he thrives away from public performing. There’s even a likely ahistorical unrequited love ignited between the singer and Isabella which prompts him to contemplate leaving Spain.

But he remained for more than twenty years serving both Philippe and his successor Ferdinand VI. That Philippe died more than a decade before Farinelli leaves Spain to retire to Bologna is but one of the historical elisions that dot the playwright’s work. As expected Rylance worked hard; his signature energy and off-kilter line readings often proved entertaining but he can sometimes devolve into a predictable shtick familiar from his regular New York appearances. He was erratically impressive in Jez Butterworth’s demanding marathon Jerusalem and his divinely scatter-brained Olivia in the Globe’s all-male Twelfth Night was one of the most delicious comic creations I’ve ever seen.

But here, with far less substance to work with, there was sometimes an air of antic desperation as he tried to keep the audience’s attention and sympathy.

As his young wife Melody Grove was lovely and quietly intense as she struggles first to cope with her husband’s abuse then with her errant passion for Farinelli. Edward Peel’s bombastic exasperation delighted as De La Cuadra while a harried Simon Jones labors intently plowed through some clunky exposition as London impresario John Rich.

But Sam Crane as Farinelli stood out and conjured an intriguingly vulnerable figure, a god among singers who never quite healed from the trauma of being castrated at his brother’s insistence at the age of 10. While not trying to emulate the high speaking voice Farinelli would have had, he adopted a delicately prissy but disarming manner.

He cannily conveyed the singer’s simple joy at discovering gardening as well as the emptiness of his isolation upon returning to Italy in the play’s final scene, though it might be added that while in retirement he was visited by Mozart, Gluck and… Casanova!

But Crane was only half of the heart of Farinelli and the King; English countertenor Iestyn Davies also as Farinelli rightly dominated the evening. As a friend and I were walking to the Belasco I mentioned that I hadn’t seen a “song list” of the music included in the play but insisted that van Kampen had to include “Alto Giove” from Porpora’s Polifemo, one of Farinelli’s greatest successes and one of the most sublime of all baroque arias.

And sure enough it was the piece Davies sang (gorgeously) when the divo is introduced to Philippe. It’s also canny choice as the king would be unlikely to be comforted by cascades of death-defying coloratura.

Van Kampen and director John Dove’s conceit is to split their titular hero into two with Crane handling the dialogue and Davies the singing. In all but one instance both are onstage simultaneously and identically dressed, although in one instance Tuesday night Davies had misbuttoned his jacket creating an amusing visual dissonance.

The single instance where Crane left the stage to Davies was also the only time when the music was not diegetic. After the Queen and Farinelli acknowledge their illicit attraction, Davies sang Rinaldo’s crushing lament “Cara sposa” directly to Isabella in the evening’s musical/dramatic high point. An adagio singer rather than an allegro one, Davies dashed adequately through the fiendishly florid “Venti, turbini” but without the hoped-for show-stopping Farinellian bravura.

Accompanied by seven accomplished musicians from the balcony of Jonathan Fensom’s Globe-like set, Davies made the evening special but van Kampen’s musical choices surprised and perturbed me. Eight (!) arias are performed, most in truncated form with just two done with their full da capo.

But, except for the Porpora, all the sung music is by Handel, presumably a gift to the audience but a gross misrepresentation of Farinelli’s legacy as he as far as we know never performed Handel. He did do a single Handel opera in London in the 1730s appearing in a secondary role in Ottone but he brought his own music composed by other composers as famous singers of the day were wont to do.

Van Kampen’s “poetic license” unfortunately errs on the side of the predictably familiar—presumably audiences are more likely to know arias from Giulio Cesare, Rodelinda and Rinaldo than works by Hasse or Giacomelli or even Farinelli’s brother Riccardo Broschi whose bravura showpiece is featured in the above clip from Corbiau’s film.

Most unfortunate is ending the play with “Lascia ch’io pianga,” a haunting piece intended for a female soprano and likely never sung by a castrato in Handel’s time although it was indeed originally composed for a castrato in Il Trionfo del Tempo e del Disinganno as “Lascia la spina”.

As I’m probably not a typical audience for Farinelli and the King, I did wonder how the average theater-goer responded to its surfeit of baroque music. The play does cannily exploit the continuing public fascination with castrati and countertenors, their modern equivalents. Indeed Tuesday’s audience seemed very engaged not only with Rylance’s capering but with Davies’s singing.

Even though countertenors have been around since Alfred Deller began their postwar renaissance, a remarkable curiosity and awe about their falsetto singing remains. There has also been an explosion in the past decade or so with countertenors recording collections of arias written for the famous castrati.

There are CDs dedicated to Bernacchi, Carestini, Caffarelli, Annibali, in addition to Farinelli. And even Davies got into the act with a collection on Hyperion dedicated to works for Guadagni, Gluck’s first Orfeo.

It’s pleasing but anyone intrigued by him should really seek out instead his splendid Handel collection, “Your Tuneful Voice,” one of the best recent baroque vocal CDs. A very nice Davies collection of Porpora cantatas might also better serve as an indication of his Farinelli.

Those intending to catch Farinelli and the King before it closes on March 25 should be aware that Davies does not perform at Wednesday and Saturday matinees and will be absent entirely for several weeks in March as he becomes Handel’s Rinaldo (a role originated by Nicolini) in New York, London and, appropriately, Madrid. His dates as Farinelli are noted on the show’s website.

His cover Eric Jurenas will presumably appear during Davies’s absences and is a very fine American countertenor who is well worth hearing.

Death is my talisman! 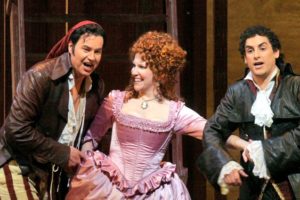 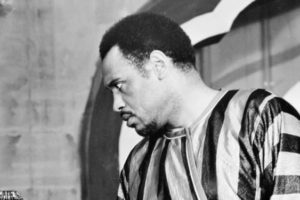