The Metropolitan Opera’s revival of Carmen began with a bit of drama Thursday night when tenor Rafael Davila replaced Marcelo Álvarez in the role of Don José at the last minute. The tenor, debuting at the house, was announced as a replacement from the stage. (Earlier in the week came the news that Clémentine Margaine—also making her Met debut—would jump in for Sophie Koch in the title role.)

Considering the spur-of-the-moment nature of the situation, Davila’s performance was forgivably a bit wooden. As Don José, he didn’t whip up the sexual frenzy and jealousy one might expect, causing his character’s choices to seem erratic and almost psychopathic in his chilly delivery. (Depending on your reading of the opera, this can either be good or bad.) Davila’s tenor, however, has a rich baritonal quality in the middle, that, when pushed up past the passaggio, could sound forceful and robust. That being said, his singing, especially during the first act duet with Micaëla, was sometimes shaky in its delivery, and the tenor suffered from intonation problems throughout.

Margaine, given a bit more time to prepare for her performance, fared much better in the title role. Her Carmen oscillated expertly between icy indifference and immature insecurity with natural ease. But more importantly, her depiction of the Romani factory worker was fully embodied, generating a wide spectrum of affect. Where a lesser actress might allow the character to exist on a superficial plane, a caricature of patriarchal anxiety, Margaine endowed her Carmen with a real personality. And her voice is a stellar instrument: dark and cool, steady like a laser beam, with a vitality that outshines her colleagues.

Maria Agresta, as Micaëla, brought an appropriately naïve dimension to the stage, serving as a clear foil to the vastly more intriguing Carmen. Her soprano was a warm, voluptuous counterpoint to Margaine’s edgier mezzo. And as Escamillo, bass Kyle Ketelsen offered a virile, steady sound that evinced the character’s sexual superiority to the impotent Don José.

Sir Richard Eyre’s staging remains resolutely un-provocative, the one major departure being his re-contextualization of the narrative within the 1930s. With short, clichéd ballets beginning the first and third act, this production does not engage the thornier questions of race and sexual oppression that permeate the opera. For example, the Romani people are shown with all the expected stereotypes, clapping and stomping like a stage-show at Disney World.

But, what is more depressing is the manner in which the slut shaming of Carmen is taken as a given, her violent end the result of a teleology rooted in patriarchal assumptions. Eyre’s Carmen doesn’t push back against these conventions forcefully enough—though, to her credit, Margaine does her best to play Carmen as a three-dimensional figure). Instead, Carmen is the spitting, open-legged she-devil we have all come to expect, Don José’s tragic flaw in a black dress.

But, perhaps these concerns are made inescapable by the very nature of the opera. To use a ubiquitous buzzword, Carmen is truly problematic in terms of its sexual and racial politics. A traditional reading of the text produces sympathy for Don José, and Carmen is understood as the femme fatale who unravels his life. To quote the Met’s program notes for the evening: “…the heroine is the villain.” As traditional wisdom will tell you, Carmen is a bad girl, who does bad things—one of which is to corrupt the unsullied Don José.

However, I believe that Carmen, the racialized and sexualized other, operates more as an escape for Don José’s ruling-class anxieties. Where Carmen is often read as Don José’s undoing, it is more realistic to position Carmen as a door through which he eludes the pressures of bourgeois values. And when Carmen fails to give him the satisfaction he seems to crave, he turns on her, a petulant toddler throwing a temper tantrum.

At the end of the fourth act, as Don José stabs Carmen—for simply refusing to return his obsessive love—something in my stomach lurches. The act, a forceful, indecent penetration, seems tantamount to rape: when Don José is not given what he wants, he takes it instead. The moment rings all-too familiar for me, so much a part of our current discourse on sex and privilege. Once again we are presented with the violated body of a woman of color.

I do not sympathize with Don José. He’s not my tragic hero, just as Donald Trump is not my president. As I write this on Friday, thousands of women are gathering to march on Washington to protest our new leader—a man who indiscriminately takes what he wants, when he wants, grabbing it without much care for the persons violated. I am sure, like Don José, he would gladly place the responsibility on his many nameless Carmens, never acknowledging his own agency.

For me, Carmen is a tragedy for Carmen and Carmen alone. How to present the opera that way is a difficult question to address. 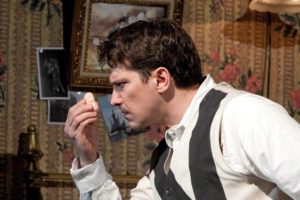