Director Barrie Kosky brings to Fiddler on the Roof fascinating ideas, fine casting, equal mixes of comedy and sadness, and, from the beginning, a sense for we of the audience that we were about to spend three hours in very good hands. 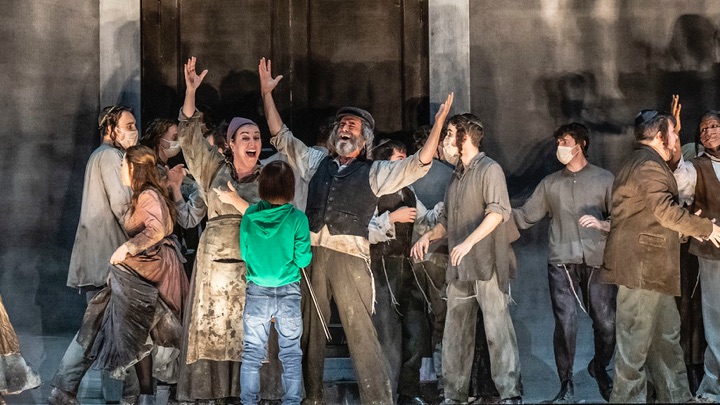 It always comes as something of a shock to my theatre-going friends when I tell them I had never seen a production of Fiddler on the Roof.  Of course, I knew many of the famous songs from excerpts on television and radio.  But the story of the comings and goings in an isolated Jewish shtetl in the midst of Russia just never appealed to me.

All that was remedied on Wednesday afternoon when I attended the remarkable production at Lyric Opera of Chicago. Lyric’s resources allowed for a very large orchestra and chorus, generously populating Anatevka including thirteen of the most brilliant dancers I have ever seen.

Director Barrie Kosky brings fascinating ideas, fine casting, equal mixes of comedy and sadness, and, from the beginning, a sense for we of the audience that we were about to spend three hours in very good hands.

Here, the Fiddler of the title is a young boy who enters in modern dress on a scooter, wearing headphones blaring modern music.  He then returns to open the doors of the center stage wardrobe where he finds his violin and begins to play (this is 11-year-old Drake Wunderlich, a fifth-grade violin prodigy with prodigious talent). 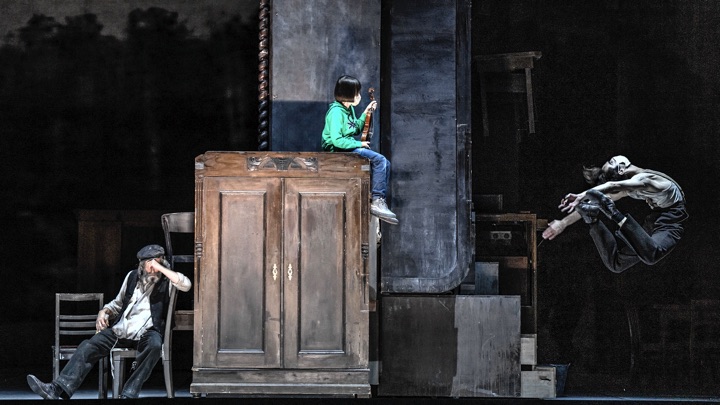 There is a knock from inside the wardrobe door, which he answers, and there stands Tevye (Steven Skybell), who instructs the boy on the local tradition.  Soon the entire population of Anatevka pours out onto the crowded stage for the rousing rendition of “Tradition.” From the very beginning, the blocking and choreography are unusually precise, with each individual chorister having their own movement pattern and character choices.

For me, Joseph Stein’s book is a flawed masterpiece.  Character development slowly unfolds over the long course of the first act—very little happens of consequence until nearly the end of the act.  The subject of the arranged marriages for Teyve’s three daughters is repeated over and over as we learn about Tevye, his wife Golde, their friend Yente, Motel the tailor et al ad infinitum.

But happily, the riveting second act makes up for the longueurs of the first with depth, humor, and poignancy and the universal themes are made clear:  youth vs. age, tradition vs. the new, community vs. individual needs.

It is also striking that the play takes place in Ukraine, with the Russian government issuing the pogroms. Kosky’s direction emphasizes these themes so the production transcends the story of a tiny Jewish town and turns it into a commentary on our common humanity. 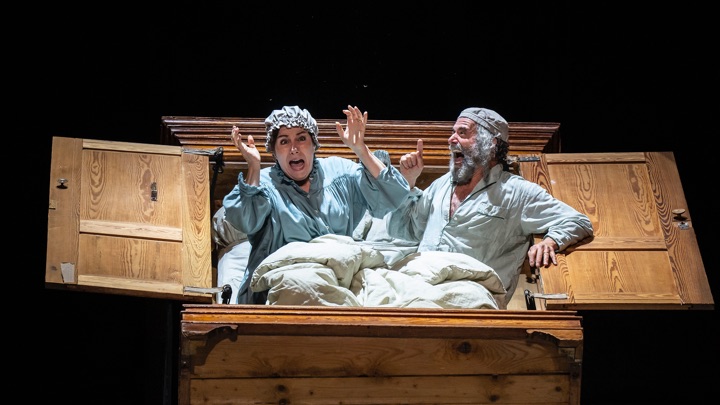 I must give special nods to the astonishing choreography from Otto Pichler and Silvano Marraffa.  The dance sequences in the first act are breathtaking, every one detailed, precise, with some amazing moments of sheer movement virtuosity that stunned the audience.  I was very happy to hear a huge ovation for the dancers at curtain call. The dance sequences alone were, as they say, “worth the price of admission all by themselves.”

The set by Rufus Didwiszus was very effective—piles of wooden furniture on a turntable that spun around in the first act to reveal various locations.  It was a fitting look for the jumble of life in Anatevka. Then, the second act revealed a winter scene with falling snow that was quite beautiful and effective.

Klaus Bruns’ costumes were dark but realistic to the 1905 setting (except when Kosky threw in a couple of modern dress costumes as contrast.) The lighting by Diego Leetz and Marco Philipp worked well, especially contrasting dimness or almost painful sharpness to reflect the moods of the story.

Skybell is extraordinarily effective as Tevye the milkman, with a powerful singing voice,  in a grounded and emotionally rich performance requiring humor, sadness, frustration, anger and commitment to religion. There were no distracting “comic mannerisms” as he was always believable and solid.

His wife Golde was played by Debbie Gravitte with great heart and a palpable love for family. The matchmaker Yente seems the most clichéd character in the show, but Joy Hermalyn brought an essential humanity to her, and her last scene in act two was quite moving.

Drew Redington was a suitably pathetic Motel the tailor.  The finest singing of the afternoon came from Adam Kaplan as Perchik, who even got applause for a single extremely long note in the first act.  The Lyric Opera Chorus sang and acted marvelously, as always.

Kimberly Grigsby led a stirring performance from the Lyric Opera Orchestra, always helping out the singers.  The orchestra played with ravishing beauty, and matched the humor and pathos of the story.

As I get older, certain lyrics affect me more than when I was young and full of ambition. I have always liked “Sunrise, Sunset” but when Skybell sang “I don’t remember growing older, when did they?” it brought a tear. This production was a fine introduction to Fiddler on the Roof and, if a Broadway theatre could pay for a cast and orchestra of this size, a transfer should be considered.