My dinner with Aeschylus

Having had many memorable encounters with these characters before, I had been looking forward to encountering them again in an ambitious contemporary Oresteia, but I left the Armory feeling that writer-director Robert Icke just didn’t get it. 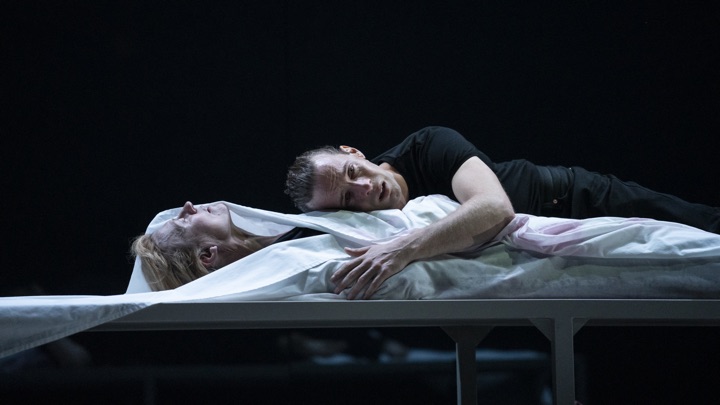 Playing at the Park Avenue Armory until August 13, Robert Icke’s Oresteia may strike those who are familiar with earlier depictions of the House of Atreus’s tragedies as perverse and unconvincing. While it began strongly—abetted by riveting performances by Anastasia Hille and Angus Wright as Klytamnestra and Agamemnon—Oresteia quickly lost steam and became simultaneously chaotic and dull.

Postponed for two years by the pandemic, this New York revival of the Almeida Theatre’s 2015 production was cursed in its own way: Lia Williams, its acclaimed Klytamnestra, injured herself just before previews were to begin in early June. Many performances were canceled while Hille rehearsed via Zoom from London while awaiting travel clearance.

The ambitious writer-director unfortunately also faced past masters who have told and retold these revenge stories much more effectively: from Gluck and Richard Strauss, to Eugene O’Neill and Jean-Paul Sartre, to Andrei Serban and Ariane Mnouchkine. As recently as 2017, Yorgos Lanthimos’s striking Killing of a Sacred Deer, to the mystification of many filmgoers, set the sacrifice of Iphigenia in modern-day Cincinnati.

While Icke takes Aeschylus’s classic trilogy as his source, he fails to mine it wisely. As he dispenses with the chorus which often fills in the needed background in the original Oresteia, he created his own prologue which dramatizes Agamemnon’s agonizing dilemma of whether or not to sacrifice his daughter Iphigenia in order to win the war. By placing his characters in the present day, Icke omits ancient Greek references depriving his drama of a specific context. There are then no references to gods or Troy.

Some commentators have suggested that this Oresteia’s first act is an adaptation of Iphigenia in Aulis. However, Icke’s Iphigenia is a young child not Euripides’s grown woman which changes the drama’s dynamic considerably. Nonetheless, Icke creates a gripping conflict through extended, agonizing, highly rhetorical debates between Agamemnon and Menelaus, then Agamemnon and Klytamnestra over the devastating sacrifice which, like all the of Icke’s deaths, took place on-stage.

After the first of three intermissions, Icke moves directly onto the Aeschylus material and immediately loses his touch with a botched Agamemnon. The stakes became more banal and less interesting. The ordinarily spellbinding character of prescient Cassandra became a screeching cipher, and her murder as well as Agamemnon’s proved confusing rather than cathartic. 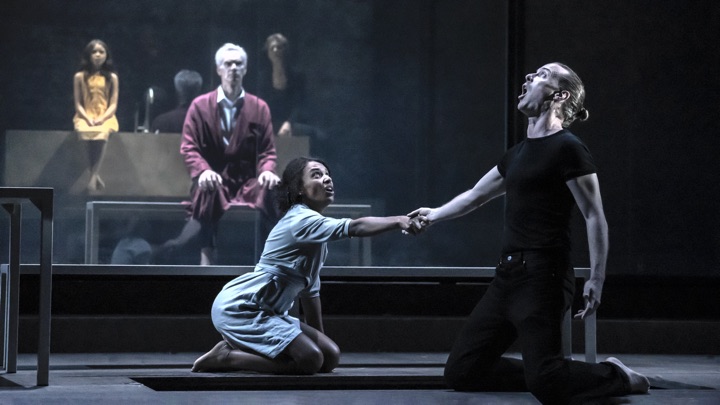 Libation Bearers offers the inexorable march toward Klytamnestra’s own murder by her son Orestes abetted by his sister Electra, but Icke’s diffuse writing failed his surefire source material, as did Luke Treadaway and Tia Bannon, his pallid, unremarkable Orestes and Electra. The latter character, in particular, lacks any real intensity of purpose, and Icke eventually goes so far as to suggest she’s only a figment of Orestes’s mania.

Aeschylus’s concluding play Eumenides dealing with Orestes’s eventual redemption is almost inevitably an anti-climax. Icke cannily framed his Oresteia as a therapy session for Orestes but that conceit dissolved into a lukewarm resolution through a labored, if pithy trial that only occasionally made telling points. But by then, I no longer cared that the generations-old curse had been ended; I was just relieved that Oresteia’s three-and-a-half hour duration was finally over.

Having had many memorable encounters with these characters before, I had been looking forward to encountering them again in an ambitious contemporary Oresteia, but I left the Armory feeling that Icke just didn’t get it. 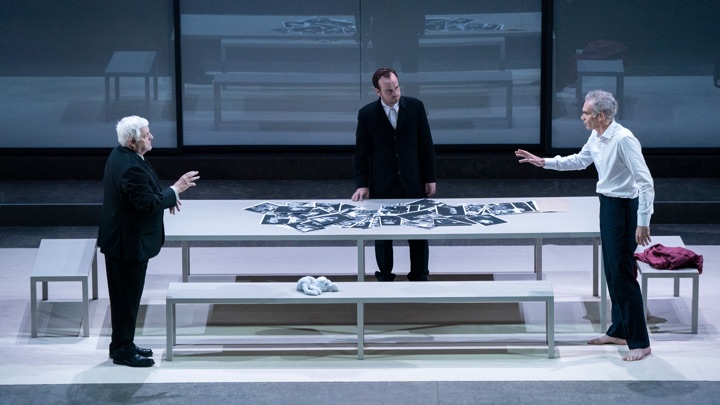 Sure, there were telling directorial touches in Hildegard Bechtler’s blandly sterile set, yet I couldn’t figure out why he’d bothered to revive these ancient figures other than to demonstrate once again Tolstoy’s adage that “every unhappy family is unhappy in its own way.” And, boy, are Agamemnon’s brood ordinarily unhappy, as the recurring dysfunctional family dinners made that familiar point.

In the days since attending Icke’s version my mind has been flooded with happier memories of other times when these characters have dazzled and moved me more. Two of the most remarkable theatrical events I’ve ever attended demonstrated how puny this Oresteia felt.

Mnouchkine created with her Théâtre du Soleil the overwhelming two-day, 10-hour Les Atrides which, like Icke’s, prefaced Aeschylus with the Iphigenia story. In 1992, the Brooklyn Academy of Music brought the startling production to another armory, Park Slope’s, and the mesmerizing, elaborately stylized Gesamtkunstwerk was difficult to shake off for days and days after.

It inevitably reminded me of Serban’s Fragments of a Greek Trilogy which I’d seen several years before at La Mama. Only one of its three plays dealt with the Atreus clan, Euripides’s Electra. It was staged in a most conventional and accessible way, whereas the haunting, candlelit Medea and the immersive environmental Trojan Women were inevitably more memorable.

I’ve lost count of the number of times I’ve attended Strauss’s shattering Elektra which though based on Sophocles rather than Aeschylus might be the greatest of all operatic adaptations of Greek drama. Though somewhat sanitized from its source, Gluck’s Iphigénie in Aulide has proved in two separate productions at Julliard to be undeservedly ignored. Though I’ve only read Mourning Becomes Electra, O’Neill’s admittedly attenuated play strikes me as a more successful attempt to modernize Oresteia than Icke’s which for all its ambition didn’t begin to do justice to its important source.