Why is so twinkling, tuneful a score so little known? 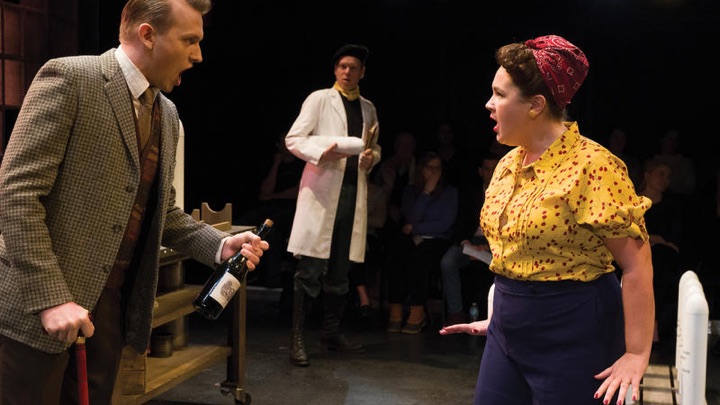 New York has not seen a professional staging of Otto Nicolai’s 1849 opera The Merry Wives of Windsor (Die Lustige Weiber von Windsor) since 1980, when Carol Vaness led a starry City Opera cast. The Juilliard School’s opera program gave it a charming one-shot production upstairs a couple of years ago and I overheard several opera bigwigs there, startled that so charming a score was unknown to them.

Unknown! Why is so twinkling, tuneful a score so little known? But they appear to have pulled strings behind the scenes, so that the school gave three performances of it this week (Sunday afternoon will be the last), fully staged at the Peter Jay Sharp Theater, which is the perfect size for the excellent cast.

Juilliard has set the show, appropriately, in suburbia, a backdrop of identical Plains-style houses (replaced by the Moon for the magical finale), with costumes that recall the early 1960s, golden age of suburban existence. (Herr Fluth, however, when disguised as Herr Bach to interview Falstaff, enters in motorcycle drag, and only a pedant would point out that his red bandana is on the wrong side.)

Director Tara Faircloth did some witty things with the simple staging, torturing tall Herr Reich into caricatured postures in order to conceal his identity when calling on Falstaff, and using the lawn to conceal eavesdroppers on the lovers’ duet. The opera is sung in German, with spoken dialogue (edited to a minimum) in English.

I rather missed the clear, silvery sound Vaness brought to Frau Fluth back in the day, that Popp-Rothenberger sort of sound ideal for the Germanic rep. Amanda Batista, who sings it for Juilliard, has a darker, more spinto sound, but sizable and impressively even from top to bottom. She is also adept at coloratura, all in all a voice I would like to hear in the romantic roles of the Donizetti-Verdi repertory.

She makes an attractive, bustling intriguante, matched, as Frau Reich, by the not dissimilar mezzo of Jasmin White, who gets to set the ghostly scene for the Herne the Hunter escapade. (Frau Reich’s aria is a happy contrast to Verdi’s Mistress Page, one of the most thankless roles in opera—very little to do, all of it difficult!)

Libby Sokolowski, as Anna Reich, sounded very similar to Batista’s Frau Fluth, even and able, with a womanly presence, but lacking the girlish lightness expected from an aspirant bride in a German light opera. All three ladies displayed genuine voices, genuinely trained, ready for mature careers—but the soubrettish touch was missing. Were there no Zerlinas or Adinas in the Juilliard classrooms?

Matthew Soibelman was not quite the stage-stealing show-off we expect of a Falstaff, and his beard made it difficult to accept him as the Fat Woman of Brentford, the disguise under which he hoodwinks his pursuers, but his pleasant basso and smirking self-indulgence made it easy to pardon his adulterous aspirations. Self-deluding Herr Fluth was sung by tall Erik Grendahl, who possesses an agreeable baritone. (It’s a comic opera. Disguises are de rigueur.)

Nicolai’s opera focuses on the marriage subplot on which Verdi wastes so little time. Anna’s chosen beau, Fenton, Patrick Bessenbacher, is, of course, a tenor—his robust figure belied by a thin voice, stretched at the top of its range, but this is no great drawback in this opera.

During the lovers’ duet, they are spied on by both Anna’s less favored suitors, the tenor Spärlich favored by her father (Michael McDermott, his melancholy sighs for “mein liebe Anna” wittily satirized by Fenton) and the bass Dr. Cajus, preferred by her mother (Joseph Parrish), and the charm of the number is the harmony of all four, enhanced by Jacob A. Climer’s scenery.

The Juilliard orchestra was ably led by Christian Reif.

Merry Wives’ obscurity is difficult to account for: only the overture is familiar outside German-speaking countries. In part, this is due to Nicolai’s nemesis, Verdi, whose Falstaff swept the world. By the time it appeared, in 1893, Nicolai had been dead forty years and was unable to respond.

But actually the entire repertory of light German opera after Beethoven’s Fidelio has grown very rare of revival. Yet these operas are worthy pieces, delicious in the proper throat and as melodious as the operettas that followed them—and no more foolish.

Schubert’s operas and Schumann’s Genoveva are revived, nowadays, only because of the names of the composers, but Weber, Hoffman, Spohr, Marschner, von Flotow, Lortzing and Cornelius—even Meyerbeer, in his less gigantic moods—all produced worthy works for the lyric stage.

You could make a very proper, tuneful, comic and sentimental season out of Spohr’s Faust or Jessonda, Marschner’s Der Vampyr, von Flotow’s Alessandro Stradella, Lortzing’s Zar und Zimmermann, Cornelius’ Der Barbier von Bagdad and Meyerbeer’s Dinorah. No earth-shattering masterpieces, perhaps, but they are stylish, easy on the throat, and could be wittily staged.

Nicolai’s librettist, Salomon Hermann Mosenthal, was not in the Boito class, but who is? He begins with the two wives discovering their love letters from Sir John. It’s a charming duet, but it means doing without Boito’s opening scene, with its presentation of the fat knight. But that’s why Nicolai’s opera is named for the Wives and Verdi’s is Falstaff: his misadventures are the center of Verdi’s tale, but the Wives take the center stage for Nicolai.

Nicolai also has no use for Mistress Quickly—I’ve always wondered why that semiretired bawd was associating with respectable ladies. Instead, we take a closer look at young Anna Reich’s ridiculous suitors. Verdi set the lovers’ duet against a background of jealous husbands rampaging through the house in search of Falstaff, which is more original as a background—and more difficult to compose.

The two plots match up best in the final scene, Falstaff as Herne the Hunter, set upon by fairies. Nicolai writes them his best-known melody, quite in the style of the Mendelsohn of Midsummer Night’s Dream. (Mendelssohn was just lately dead, amidst plotting an operatic Tempest.) Forty years later, Verdi sets the scene without a note or a nod in Mendelsohn’s direction.