Embedded in the discursive scenes that make up the 100-minute play Shhhh is the notion that the line between pleasure and pain—of the corporeal and psychological varieties—is ever-shifting and often problematically conceived. 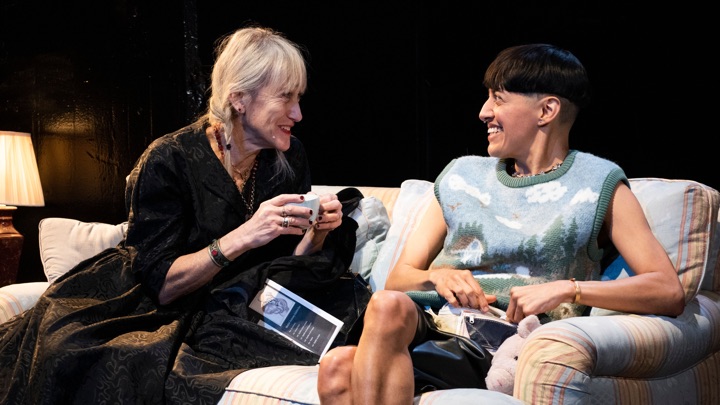 David Fox: When writing about a play that unabashedly is first and foremost about female sexuality and kinky proclivities, I’m discovering that almost every phrase sounds like a double-entendre. Oh well, screw it: Shhhh has a great opening. In murky darkness, we barely perceive actress Constance Shulman, seated in a window above the rear of stage. A faint whisper comes at us: Shulman’s wonderfully weird voice, dry and crackly as old twigs, is simultaneously ancient and infantile. What she’s talking about—household items, favorite drinks—hardly registers. Instead, what we get is something beyond the words: an unmistakable sense of a secretive, alluring, illicit world. Sounds of crinkling paper, louder than the voice, add additional creepiness. Though the light gradually increases, the sense of mystery remains through this monologue. I found it, and Shulman, absolutely riveting. Too bad it’s downhill from here.

Cameron Kelsall: In that opening sequence, Shulman performs a narration meant to stimulate autonomous sensory meridian response, or ASMR, a physical sensation triggered by whispering, white noise and other stimuli that might seem mundane out of context. It’s a phenomenon that can be erotic and euphoric to some and repulsive to others. That could describe most of what Clare Barron considers in Shhhh, which seems in constant conversation with the concepts of boundaries, consent, and gray areas. The characters talk, sometimes at length, about their sexual peccadilloes—sometimes, they enact them. Embedded in the discursive scenes that make up the 100-minute play is the notion that the line between pleasure and pain—of the corporeal and psychological varieties—is ever-shifting and often problematically conceived. Yet it didn’t work for me as either an act of titillation or a discourse on sexual politics. On one hand, sex and kink strike me as contact sports, meaningful to those fully engaged but largely blasé to others. On another, Barron’s script cosplays discomfort without ever seeking to make the audience actually uncomfortable. 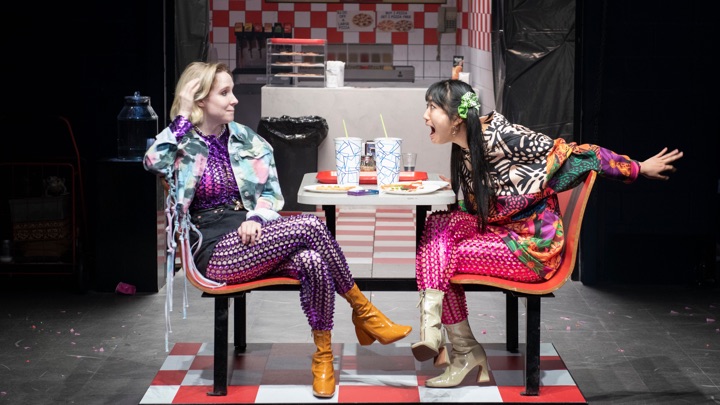 DF: Shhhh is not conventionally narrative-driven, yet it’s surprisingly easy to summarize. Two sisters, Shareen (Clare Barron) and Sally (Shulman) centrally drive a series of episodes that center on their sexual lives, either as descriptions of their complex feelings, or within relationships where they act out. It seems clear that we are meant to take the “sisters” idea metaphorically: in the script, Sally is called “Witchy Witch,” and—not to be ungallant—though they are described as two years apart, the age difference between Shulman and Barron is considerably more than that. As Shhhh proceeds, we see each woman in a relationship (not sure this is right word here, but whatever) where she takes a possibly dangerous level of sexual control. Shareen paddles the bare butt of Kyle (Greg Keller), a somewhat uncouth male partner. Sally uses a sinister looking machine to generate electric shocks to Penny (Janice Amaya), her chic gender-fluid companion. Yet outside of these episodes, the general tone is rueful commentary on how little sexual control women actually have, which is echoed by Sandra (Nina Grollman) and Francis (Annie Fang), a pair of glitzy hipsters chatting away in a dive-y pizza joint. And yes—the Clare Barron who plays Shareen is also the playwright. This certainly adds to the sense that Shhhh is, at least, in part a memoir—and like so much else here, it can be perceived as brave, narcissistic, or both.

CK: The scene between Sandra and Francis—two characters who otherwise have no agency or purpose within the dramatic structure—homes in on the points Barron wants to make more than many of the scenes between the sisters and their partners. Grollman, in particular, is an arresting presence onstage, and she verbalizes the murky nature of contemporary sexual politics with a refreshing sense of uncertainty. In one moment, she considers whether it would be her “moral obligation” to kill every straight cisgender man in the world if given the opportunity. A second later, though, she reflects on her own privilege as an attractive white woman. As the character serves little narrative purpose, it’s intriguing to consider whether Barron uses her as a further mouthpiece for her own muddled ideas about sex and power. If so, it lands with a clarity missing from the rest of the play.

DF: Barron’s fingerprints could hardly be more deeply embedded in Shhhh. As I said already, in addition to writing it, she plays a principal role. She’s a compelling actor for sure—even if this were not “her” play, I could imagine she would have been at the top of the casting list. Her direction, if anything, is even more interesting. The physical production is weirdly, disorientingly spectacular—kudos to the design team of Arnulfo Maldonado (scenery), Kaye Voyce (costumes), Jen Schriever (lights), and Sinan Refik Zafar (sound). The experience feels immersive—the audience enters through a strange liminal space that feels as though the stage spilled over into another room, and once seated, we are—appropriately—squeezed into almost uncomfortable intimacy. Yet it ultimately fails to generate the shock waves it’s meant to. Staging sexual acts almost never does, I think—here for example, the paddling, which I think is meant to be upsetting, never feels anything but contrived. In this, the production frankly echoes the limitation of the script.  Shareen, in a final monologue, says what I take to be the plaintive thematic centerpiece of the play: “I am a machine for other people’s desires. And I don’t quite know how that happened or how to make it stop.” We should be moved, I think—but it’s so at odds with what we’ve seen so far that instead it feels simultaneously unearned and whiny. 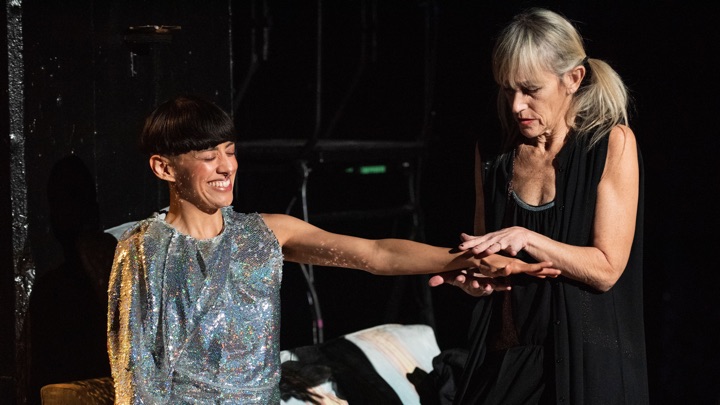 CK: I think the issue with Barron’s writing, which is often snappy and wry on the surface, is that she focuses too keenly on the situations Shareen puts herself into and not the psychology underpinning them. Are we supposed to take away, for example, the idea that embedded power dynamics can keep a woman from ever truly consenting to sex with a man—the idea that even when she’s in a position to cause literal pain, he retains the upper hand? That’s an interesting idea, but it doesn’t come to fruition here, and that final monologue seems tacked on from a different script.

DF: Shhhh is clearly not meant to titillate, and I risk outrage by even making the following comparison here. Though I’m not blind to the sociocultural problems of pornography, as a form of entertainment I like that it’s forthright and unpretentious. Shhhh, alas, can’t make the same claim.