Director Jon M. Chu’s film adaptation of Lin-Manuel Miranda’s In the Heights has come around at exactly the right moment. 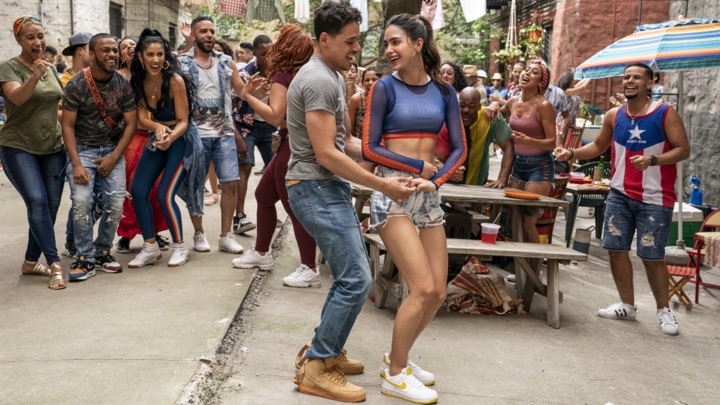 David Fox: The pressure’s on, isn’t it, Cameron? Director Jon M. Chu’s film adaptation of Lin-Manuel Miranda’s In the Heights seems almost to dare us not to love it. Miranda is as close to a universally adored and respected artist as anyone I can think of, and the excitement around this project is considerable. And, of course, we’re also two gay White guys writing about a Latinx experience that is not ours. But—deep breath—here I go. To start: I’ve rarely felt so many divided emotions as I do about this film. I almost wish I could write two different reviews. On a gut level, it’s irresistible: emotional, colorful, joyous, inspirational; brimming with energy, talent, and tunefulness. I will have more to say about those things, though I almost wish I could just stop there. But I also think Miranda’s signature optimism is often peculiarly out of kilter with the story here, and neither the narrative structure nor the score of In the Heights for me have sufficient specificity, variety or range. Okay, that’s my opening salvo. What do you think?

Cameron Kelsall: My first thought is that In the Heights has come around at exactly the right moment. For one thing, we’re starved for a good movie musical, especially since the last high-profile project to debut pre-pandemic was—spit on the ground—Cats. Chu and Miranda, along with screenwriter Quiara Alegria Hudes, certainly best that effort by a country mile—or, I should say, by a wide city block. But more importantly, as the world re-emerges after so much devastation and heartache over the last 15 months, the particular impact of an uplifting, exuberant story like the one told here cannot be overstated. That’s especially true when you consider In the Heights as a love letter not only to New York, but to what makes New York special—the fabric and flavor of the micro-communities like the predominantly Dominican and Puerto Rican Washington Heights where it’s set. I didn’t find it a perfect musical when I first saw it on Broadway in 2008, and I don’t think it’s a perfect movie now. But I came away largely charmed and frequently smiling.

DF: Well, Tom Hooper’s Cats is the barometer that makes Mame with Lucille Ball look like The Wizard of Oz, but I take your point. More than that, I largely agree with impulse to like, even to be enchanted by, In the Heights. But in scene after scene, I couldn’t help but feel we were getting a too-glossy, surface positivity that contradicted the genuine core bitter-sweetness that should be at the heart of the show. In particular, I think Chu’s hyperkinetic direction does the show no favors—the animated cartoonishness is a very unwelcome Disneyfication of a show that has more to say than that. I also dislike the framing story that the movie uses, which essentially removes any tension that things might not turn out alright. (Though frankly, there’s not enough of that in Hudes/Miranda original either.)

CK: I agree that the framing device—which I won’t go into so as to avoid spoiler—adds little to the experience, but I want to push back somewhat on what you perceive as the Disneyfication of the piece. I’ve always viewed this as a musical that celebrates the resilience and the spirit of the neighborhood that it portrays. In the words of one of the musical’s central characters, Abuela Claudia (played by Olga Merediz, reprising her Tony-nominated role), the story on display is made up of “little details that tell the world we are not invisible.” That is what makes up the material too. The people portrayed experience hardship and indecision, but they also feel joy, pride in the lives and heritages, and a genuine love for each other, forming familial bonds that extend beyond blood connection. I don’t think they need to be shown as resigned and downtrodden in order for us to believe they’ve known struggle. One of the aspects of the musical I find most endearing is that it focuses on how these individuals come together as a community to support each other, even when times are hard.

DF: I don’t think we’re disagreeing—I also enjoyed (mostly, at least) the sense of resilience and even good cheer. The Disney stuff I was referring to was the use of animation, gravity and reality defying choreography, and a few other photographic tricks that I found cheesy. But hey, I’m sure that’s not the universal reaction, and even for me, I had mixed feelings—sometimes I found the sheer theatricality of it very winning. Speaking of winning—and moving to happier topic for me—the cast is pretty much everything you could hope for and more. You’ve already mentioned Olga Merediz, who is a wonderfully giving, layered actress and also a sensational singer. How marvelous that she’s reaching a larger public here. Jimmy Smits of course has gotten plenty of (deserved) attention throughout his career, but here he surprises through effortless charm and exceptionally good pitch!

CK: I found Corey Hawkins, as the sweet-natured taxi dispatcher Benny, as winning here as he was absolutely terrible in the recent Broadway revival of Six Degrees of Separation. He’s paired nicely with Leslie Grace, who makes an affecting film debut as Nina, the central girl-from-the-neighborhood who comes home from a year spent at an elite college (in this case, Stanford) with mixed emotions. Grace isn’t a vocal powerhouse like some of the women who’ve played the role onstage, but she convincingly portrays the inner conflict at the heart of the character. It was also a treat to see Daphne Rubin-Vega in a juicy, funny part that perfectly suits her personality. To me, she’s one of the last real individual artists of the stage, a performer with a one-of-a-kind aura that’s largely disappearing thanks to the BFA-ification of musical theater. Her distinct, gravelly voice sounds as exciting as it was when she originated Mimi in Rent… gulp… 25 years ago.

DF: We’re sort of burying the lead here, aren’t we? Lin-Manuel himself becomingly takes on a relatively minor role here—Piragua Guy—to which he brings his signature charisma and charm by the bucketful. In Miranda’s original role—Usnavi, the show’s lead—Anthony Ramos gives a star-making performance, with a million dollar smile that I think will light up movies for years to come. I thought there was generally too much smiling across the board in this film of In the Heights, but I’m going to let it go.

CK: In the Heights is currently streaming on HBO Max in addition to a theatrical run, and it’s interesting to consider Ramos’ spirited, ebullient performance here against another role on the same network—as a clinically depressed healthcare worker on the current reboot of In Treatment. He totally melts into both roles—charisma to spare as Usnavi, deep searching anguish on In Treatment—and is clearly the real deal in terms of detailed, committed acting. It’s nice to see the industry getting in on the ground floor of what should be a long, distinguished career. And it’s nice that such that this lovely musical, which speaks so much to the current moment, will be discovered by a wide audience.