When a Met loves a woman

The Met recently submitted another eye-roll inducing entry for the Woke Olympics with their Women’s History Month slate. 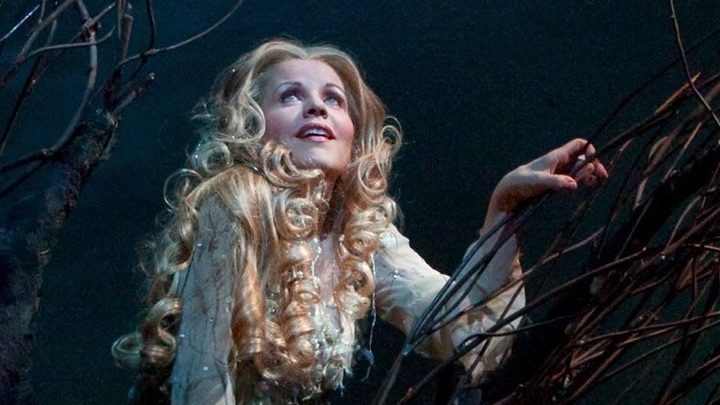 What are they programming, you ask? No works by women, that’s for sure. Instead, we have works by those famous feminists, Donizetti, Verdi, Wagner, Mozart, Britten, and Dvorak.

Y’all remember the great feminist classic Rusalka where the heroine loses her soul because she’s just so in love with a man that she gives up her own voice? What about Die Zauberflöte, which explicitly includes a challenge not to listen to silly and deceitful women? What about the fact every single one of these operas were also conducted by men, with 4 out of the 7 of these productions conducted by James Levine, known sexual abuser? Sounds like some serious #girlpower, if you know what I mean.

Okay, I’ll stop being sarcastic now. I’ve been told it’s not a good look on me, though it was always men who told me that, so maybe I won’t.

The Met tried to get around this central lack of operas by women (or even operas conducted or directed by women), by centering their marketing around performers, a move which I have complicated feelings about.

Beverly Sills, Marilyn Horne, Jessye Norman, Renee Fleming, Leontyne Price, Patricia Racette—all of these women are formidable singers (to say the very least), singers who have shaped our modern understandings of some of opera’s most beloved female characters and created new ones, and who have served as vocal and professional models for myself and almost every other female singer I know.

They deserve this recognition, and indeed much more, for their role in creating modern opera history. As a music scholar, I am not actually opposed to this move; focusing on performers in historical music research has done much to take music studies away from a purely composer-centric model and to help to rediscover and uphold the women and people of color who have been erased from opera history, due to the racist and misogynist logic of canon formation.

But, as I said, I have more complicated feelings than this proto-apologia I wrote above implies. By thinking about this in terms of de-centering the male composer in favor of the female performer, we’d be giving the Met far too much credit.

The Met’s Women’s History Month/Week can’t undo the sexist depictions of women in so many operas in the standard repertoire, depictions that have grown ingrained in production after production that stem from a male perspective on women’s emotional lives.

This ground is so well trod, with Catherine Clément serving as one of the early lightning rods, that I won’t go too far into it, but I will say this. It is not always easy to be an opera singer and a feminist, when so much of the repertoire we sing and characters we embody play into some of the worst stereotypes about women.

It cannot make up for central lack of women in the roles of artistic decision-makers outside of the performers. It cannot make up for the fact that the Met has only produced two operas by women in its entire history, and that they don’t seem to be changing that any time soon, despite all the excitement about the Jeanine Tesori and Missy Mazzoli commissions. (Given that we haven’t heard anything about them in over three years and don’t have a premiere date, I’m not giving them this one yet. The Met can get their “good feminist” cookie after the premieres).

It doesn’t change that the directors, conductors, and production designers remain overwhelmingly cis and male and white. If the Met really cared about women, they would be working on commissioning and performing works by living female and non-binary composers, discovering and reviving works by historical female composers, and letting female creative teams interpret the old workhorses of the company AND continuing to hire smart, sensitive female artists who really have something to say about the characters they’re embodying and en-voicing (and who don’t defend performing in blackface).

Thinking of performers as always secondary to composers creates a very skewed understanding of the art form, not only of opera as one of history’s most incredible spaces of continuous collaboration, collaboration that extends long after the deaths of its creators, but also a false sense of how opera, when it’s really good, is experienced, which often relies far more on the singers in question and how they inhabit a character, than any real sense of accessing a composer. Yes, of course, someone has to write the music, but most importantly, someone has got to sing it and make it alive.

If you’re like me, and I have a feeling that many parterre box-ers probably are, you think of these characters nearly as living people; these women who laugh, and scream, and break your heart, who mirror your own emotions back to you but blow them up to ten times their size so you can feel them harder.

When Tosca sings “Vissi d’arte,” I’m not sitting there thinking, “Look at this fake character that was written by men singing about a real issue of sexual that women and non-binary people face every single day. Too bad it was written by a man. Men just don’t understand!” (Well, I think that if the performance is bad). When I’ve got a good Tosca, I can only cry with her, because I know her—and that is the result of the artist who is giving her voice.

Singing an operatic role requires you to give over your body, your mind, your voice—the very things that make you who you are, that define you. And, as we see again and again, the finest artists are able to imbue even pretty sexist characters such life and humanity that they can still appeal to female audiences; or in some cases (I’m thinking of Angel Blue here), can make an old character feel so fresh and new, so smart and tough and cool, that I wanted Mimí to be real so badly that I could almost reach out and touch her cold hand myself.

A good singer can make even the most troubling female characters, well, if not likeable, at least emotionally palatable because she can make them human. So, should we be talking more about these performers? Yes. Should we be crediting them, not only as artists but, in the case of many, as pedagogues and activists? Most certainly. And should we be actively seeking feminist restagings of canonical works, yes, god, yes.

But, if they’re really serious about shifting the conversation from composer-centered discourse to one that allows women to tell their own operatic stories, they need to trust that these performers, the ones like Price, Norman, Fleming, Sills, Horne, and Racette, will be able to bring their immense intelligence and artistry to works by women and make them classics too.

Opera has gotten away with this for too long; in part because of the patriarchal society in which it was created and now exists, and, I suspect, because it’s an industry which professes extreme devotion to its female stars. Yes, I’m blaming diva worship, if only a little bit, because the hypervisibility and fabulous success of these women—the Netrebkos and Flemings and Leonards of the world—makes it seem, at least from the outside, that opera is a far more women-friendly world than it actually is. We adore them, but in our adoration it’s easier to ignore the problems.

Finally, let me lay a few little stats on you, gathered from a report published in November of last year by Zach Finkelstein, Dana Lynne Varga, and Hillary LaBonte in Middleclass Artist. They cite data compiled by Mathilda Bryngelsson of the most performed operas from 2010-2019, roles for men in opera outnumber roles for women at a ratio of 3:2, while the number of women who receive degrees in vocal performance outnumbers men 7:3.

In other words, while there are nearly twice as many female singers on the market than men, there are nearly twice the number of operatic roles for men. Women are three and a half times less likely to be cast. Why is this? It’s in part because of the way the roles break-down in canonical works; on the whole, there are simply more male characters than female characters in operas, particularly in supporting roles.

Universities are also more likely to grant scholarships and other financial aid to male singers because of the need to fill out their ensembles, thus often making it easier for male singers not only to get more roles on their resumes than their female colleagues but also to do it without incurring as much debt.

Even when women do make it to the top, they are still much more likely to face discrimination based on age, weight and appearance. Despite opera’s cute little “fat lady singing tagline,” I will be quite honest in expressing that I have never been in an environment that more rigidly enforced sexist and patriarchal beauty standards than in my college opera workshop and in the young artist programs I attended.

The saddest thing about this was that these often came from a place of purported love, from a place of wanting us to have a great a chance as we could in succeeding within the systems as they currently exist.

One only need to remember the virulent fatphobia directed at Tara Erraught after her 2014 Glyndebourne performance as Octavian, largely by male critics who found her “too fat” for the role and thus unconvincing to feel the proof of this. Women in opera, like women in every field, are more likely to be victims of sexual harassment and assault, and, because of the lack of men, more likely to be punished for it by losing career opportunities. And on and on and on. Ask any singer you know.

The Met’s turn towards the performer-centric without acknowledging or attempting to change these structures, structures it was often responsible, at least in part, for creating, just doesn’t do it for me. It doesn’t tickle my feminist fancy.

That’s why this little slate is galling to me; it’s cheap and disingenuous, another corporate attempt at wokeness from a company who clearly doesn’t give a shit, not even enough to make vague corporate-speak promises to investigate these issues in the future. Giving women performers their due—if that’s even what this is— is only the barest minimum.