This year’s earth-shaking advance in gay cinema apparently was the first inclusion of same-sex couples in “Christmas rom-coms.” 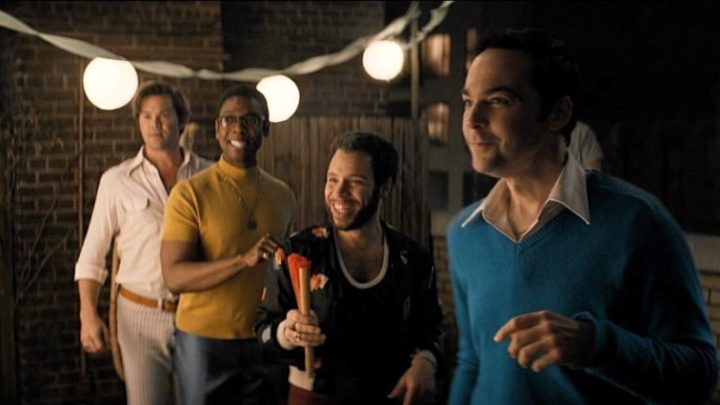 Beyond mainstream arthouse films, this year I viewed more than my usual quotient of LGBTQ cinema. Even before moving to New York, I tried to catch important gay titles. Once here I could depend on The Quad or Cinema Village or some other independent Manhattan cinema to bring in interesting (and often not-so-interesting) works from around the world. With theaters closed for most of 2020, I inevitably turned to streamers like Netflix and Amazon Prime as well as free (!) Tubi: all repositories of new and old LGBTQ titles.

This year’s earth-shaking advance in gay cinema apparently was the first inclusion of same-sex couples in “Christmas rom-coms.” Never having seen one of any kind, I became curious particularly after spotting many excited reports including a pair in The New York Times.

I had some inkling that these holiday fantasies followed a formula, but I was still taken aback that both Dashing in December and The Christmas Setup featured a dull, white, clean-shaven Manhattan workaholic who returns to his quaint hometown for a visit to his recently widowed mother. Once there he swiftly encounters an earthy, bearded, inexplicably eager romantic prospect. After resolving a real estate crisis with help from a non-white female friend, the hero abandons the big city so he can participate in the local, super-secular Christmas now and forever with his presumptive future husband.

This cable-produced pair passed by painlessly, harmless and inoffensively modest (just a smooch or two), unlike Clea DuVall’s Happiest Season, their horrendous lesbian counterpart. This witless comedy eschewed the usual falling-in-love trope in favor of a nightmarish homeward journey into the psychic toll of the closet. Kristen Stewart grimly took one for the home team and displayed zero chemistry (despite much canoodling) with the dull actress playing her uptight girlfriend. Excruciating hijinks led to empty revelations swiftly smoothed over for an unconvincing happy ending. HS was easily the year’s worst gay-themed film.

After that disaster, it’s a relief to report that the US’s two best were directed by women. Alice Wu’s The Half of It inventively reshaped Cyrano de Bergerac into a touching teenage rom-com with a surprisingly complex queer twist.

Lingua Franca was written and directed with piercing insight by Isabel Sandoval, who also starred as an undocumented Filipino trans woman struggling to find a husband in order to secure a green card amid a frightening ICE crackdown.

The over-the-top banter of Straight Up by James Sweeney, another eager multitasker, sometimes grew wearying but his bright teamwork with lively costar Katie Findlay eventually won me over.

Two much-ballyhooed Netflix flicks ended up less than the sum of their promising parts. A Ryan Murphy-ized prologue and epilogue subtracted from Joe Mantello’s self-conscious adaptation of his Broadway staging of the impossibly dated ’60s play The Boys in the Band. Other than earning props for casting it with out actors, this version only served to remind me of William Friedkin’s searing earlier Boys. Despite a moving performance by Paul Bettany, Alan Ball’s colorful Uncle Frank offered only a predictable 70s outing plot buried in a hoary compendium of Southern clichés.

Latin America also had a variable year with Argentinian Marco Berger who had achieved minor miracles with his micro-budgeted Plan B, Hawaii and The Blonde One stumbling badly in Young Hunter, an uneasy, thrill-less thriller. One can easily imagine how Chile’s The Prince played out: an innocent but very pretty first-offender enters a seething, lawless prison.

Guatemala, however, unveiled two exceptionally satisfying films that cannily avoided the over-familiar paths of “coming out” and “falling in love” films. The devastating familial and religious repercussions faced by a man who leaves his wife and child to take up with a male lover made Jayro Bustamante’s Tremors a shattering experience.

José’s protagonist reminded me of the lovers in Heidi Ewing’s frustrating I Carry You with Me. While they do find each other, repressive Mexican mores prompt them to steal their way into the US. Ewing, a noted documentarian, mixes a ravishingly done early love story with years-later prosaic footage of the real couple, a jarring juxtaposition that grievously mars an otherwise beautiful film.

Long one of the world’s greatest directors, Tsai Ming-Liang of Taiwan has made no film as overtly homoerotic as Days, a demanding “slow cinema” examination of a potent if fleeting connection between an ailing middle-aged man and his young masseur.

I admired Xavier Dolan’s messy, compelling first five films, but he lost his way with two recent star-studded pictures including The Death and Life of John F. Donovan, an irredeemable disaster. However, with Matthias et Maxime he returns to acting and to his native Quebec for a slightly gimmicky but winning tale of confused millennials.

Conversely, François Ozon’s superb previous three features—Frantz, Double Lovers, and By the Grace of God—have been followed by the empty, unconvincing Summer ’85.

Francis Lee’s admirable debut God’s Own Country was so easy to love compared to his second feature Ammonite which is every bit as uncompromising as its protagonist played with fiercely self-absorbed brusqueness by Kate Winslet. Lee rigorously opts to make Kate’s halting romance with Saoirse Ronan secondary to her driving passion for her scientific work.

All in all, an uneven year enlivened by several must-see LGBTQ surprises.