Without furnishings to distract them, the cast prowled the stage with sinister energy, exchanging significant looks and deadly secrets as though fearing Nihilists behind every drapery. 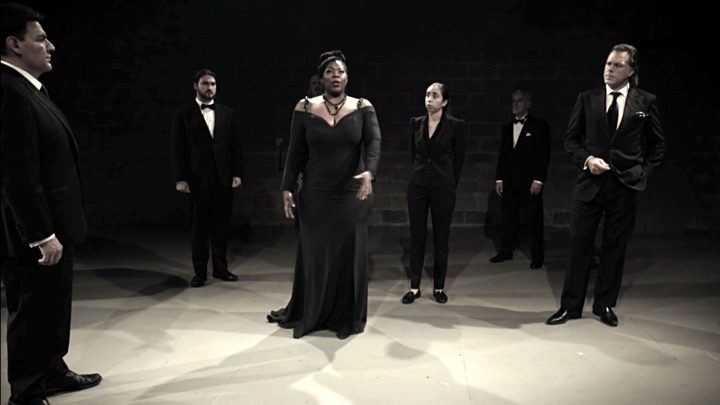 The assassination of Tsar Alexander II by Nihilists in 1881 was far too thrilling an event not to inspire Sardou to derive a play from it for his girlfriend, Sarah Bernhardt. Of course, the censors demanded no Tsars be damaged or even mentioned in the action; instead, the piece concerned Nihilists who murder the fiancé of a princess named Fedora. She vows revenge and lures the aristocratic murderer to a trap in her home in Paris … where they fall in love….  (Violent twists of emotion were specialties of the Bernhardt-Sardou team.)

A young composer named Umberto Giordano saw Sarah play Fedora, and lusted to make an opera of it. Generations earlier, Verdi would have done so at once, but copyright laws had come into fashion and Giordano was, in Sardou’s opinion, a nobody. He wanted a top composer to set his play. Only after Andrea Chénier had given Giordano sufficient reputation was permission granted, and Fedora was composed for Gemma Bellincioni. An up-and-coming tenor named Caruso created the role of her lover, Loris.

Teatro Grattacielo, which has presented concert performances of Verismo operas for 30 years, chose Fedora for a winter’s semi-staged offering. The company usually presents works with a sizable orchestra and chorus—Verismo’s chief distinction from earlier Italian opera is the rich orchestration devised by composers who had studied Wagnerian style—but Fedora, a short opera with no chorus, many small roles, and only two big ones is ideal for Verismo in times of Pandemic.

The orchestra is replaced by a piano, played by company maestro, Israel Gursky, who easily doubles in the role of Lazinski, “the new Chopin,” a Polish pianist who performs in Fedora’s salon but never sings a note. Besides Fedora and Loris, the only roles of any size are a French police chief and a dizzy countess for whom “it’s so delicious to conspire.” Actually, the most interesting characters in this story never appear at all: Fedora’s murdered Vladimiro, his sinister father, the chief of the Tsar’s police, Loris’s faithless wife, and his drowned younger brother.

The cast were all carefully tested before removing their masks to perform, and the sets and costumes are basic black. (No Paris salon, no Swiss lake views.) Malena Dayen directed the cast, and without furnishings to distract them, they prowled the stage with sinister energy, exchanging significant looks and deadly secrets as though fearing Nihilists behind every drapery. The lighting of the spare set is by Jon DeGaetano.

The most commanding figure on the stage, properly, was that of Fedora, Michelle Johnson, a recent Met National Council Auditions winner. She piled her hair majestically high and let her décolletage plunge deliciously low, the better to display the jeweled cross on which she swears vengeance and other passionate Verismo sentiments. This is a good thing, as the cross is a brooch concealing (as you expected) a fatal poison—but for whom? Johnson took a little time to fully engage the support of her large, glowing instrument, but by the love duets of Act II she sounded certain and amorous throughout a deep range. Act III, and its designated tragedy, brought full-throated remorse. This is, after all, her opera.

Loris Ipanov was Jeremy Brauner, acting and singing with a dark lyric ardor and an appealing clarity of tone. “Amor ti vieta,” the only tune anyone remembers from this opera, was full of yearning, and his romantic sound and effortless vocal production gave great pleasure—he had no trouble at all keeping passionate pace with his princess. I hope to hear him soon in roles that offer him more to do.

Marcelo Guzzo (De Siriex), made a suave and very tall courtier, Rubin Casas (Grech), was alarmingly theatrical as a Russian counterspy, and Maria Brea charming as Countess Olga, Fedora’s flibbertigibbet sidekick. There are nine or ten roles of no significance in this opera, mostly in the salon that is background for Fedora and Loris’ mutual seduction, but they all must be sung well. All were ably cast, reminding us how full New York is of singing talent, eager to pour itself into our ears, in perilous confrontation, face to face.