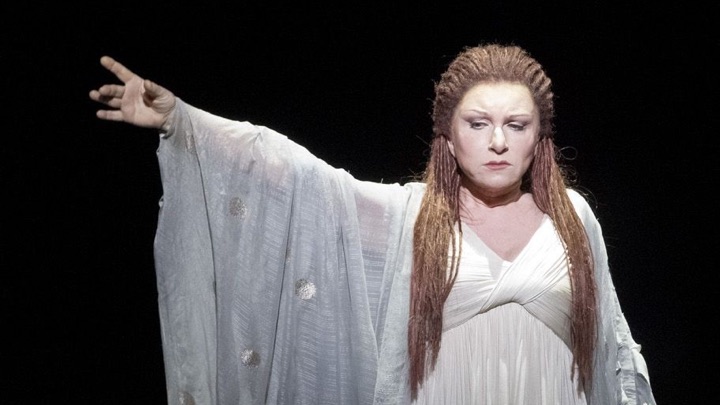 The day after her 33rd birthday Devia turned to a French coloratura showcase for her debut with Opera Orchestra of New York, a group with which she was associated for 33 years and under whose auspices she displayed her formidable talents rather more distinctly than at the Met. After Lakméshe returned to OONY for Teresa in Berlioz’s Benvenuto Cellini (but canceled a subsequent Robert le Diable) before turning in the 1990s to the Italian repertoire she is best known for—I Capuleti e I Montecchi, I Puritani and a Donizetti rarity, Adelia.

After a 15 year absence she returned for OONY’s Roberto Devereux, one of this decade’s most memorable evenings hailed by the kind of riotous, foot-stomping ovations we don’t often experience these days.

My initial in-person encounter with Devia was coincidentally an excerpt from Lakmé at an ill-starred OONY 1982 Gala where frustration with numerous cancellations (I recall that Christiane Eda-Pierre, Tatiana Troyanos and at least two other announced headliners dropped out) caused audience members to mercilessly heckle Tony Randall, the event’s flustered host. It must have been such a bad experience that it’s not even listed in OONY’s performance history.

But it was memorable for me as it was the only time I ever heard Gedda (singing the Pêcheurs aria) and exciting flash-in-the-pan Margarita Castro-Alberty who was the surprise hit of the night. Devia did show up and sang not the “Bell Song” but a lovely “Berceuse” so I looked forward to her appearance that fall with the Dayton Opera in Lucia di Lammermoor. The Donizetti was the first opera I ever attended 12 years earlier but never a favorite and Devia’s placidly proficient madwoman didn’t change my mind. — Christopher Corwin